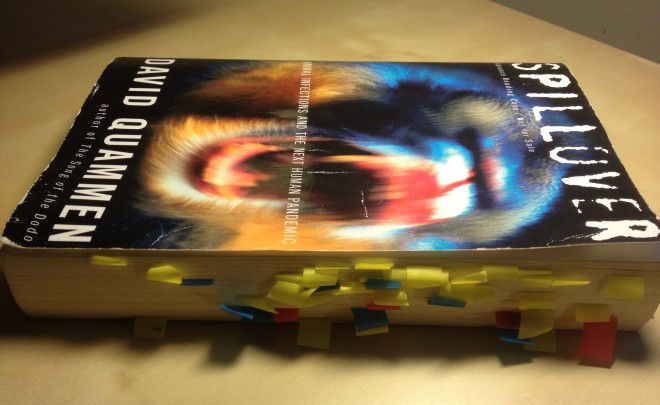 The wonderful shop-talk site for science writers, The Open Notebook, just published the first of two interviews I did recently with author David Quammen about how he researched and wrote his magnificent new book Spillover: Animal Infections and the Next Human Pandemic. This first installment covers how Quammen gathers the raw materials for his work; next week’s will look at how he turns that into sinuous, rich books such as Spillover and his iconic The Song of the Dodo.

Here’s a bit from Part I, now up in full at The Open Notebook. A video will soon be posted there as well:

Dobbs: Spillover, as you put it at one point in the book, is about “the infernal aboriginal connectiveness between us and other kinds of hosts.” You show us how these connections can kill us. You show us some practical things, too, like when you look up at bats flying overheard, don’t open your mouth in amazement, because bats sometimes pee when they fly — and after you’ve read this book, we’ll know, for a deep fact, that you do not want a bat to pee in your mouth.

Quammen: The moment that started me on the road to this book, 12 years ago now, was when I heard about an outbreak of Ebola in a little village in northeastern Gabon, I was in the midst of a long, arduous hike across a forest — I was writing a National Geographic story about a researcher named Mike Fay, who was walking a survey transect all the way across Africa — when at a campfire one night in the middle of Central Africa, I met some fellows who started telling me about the time Ebola hit their village. Their village was a place called Mayibout 2; it was an outbreak I already knew about from the literature.

This one fellow in particular, Thony, started telling me what happened after some boys brought a chimp back from a hunting trip from the forest into the village, and people in the village butchered and ate the chimp — and quickly, within a couple of days, they started getting very sick. [He reads:]

They vomited; they suffered diarrhea. Some went down river by motorboat to the hospital at Makokou. But there wasn’t enough fuel to transport every sick person. Too many victims, not enough boat. Eleven people died at Makokou. Another eighteen died in the village, Mayibout 2.… To this day, no one in Mayibout 2 eats chimpanzee.

I asked about the boys who went hunting. Them, all the boys, they died, Thony said.… Had he ever before seen such a disease, an epidemic? “No,” Thony answered. “C’était la première fois.” Never.

How did they cook the chimp? I pried. In a normal African sauce, Thony said, as though that were a silly question. I imagined chimpanzee hocks in a peanut-y gravy with pili-pili, ladled over fufu.

Apart from the chimpanzee stew, one other stark detail lingered in my mind. It was something Thony had mentioned during our earlier conversation. Amid the chaos and horror in the village, Thony told me, he and Sophiano had seen something bizarre: a pile of thirteen dead gorillas lying nearby in the forest.

Thirteen gorillas? I hadn’t asked about dead wildlife. This was volunteered information. Of course, anecdotal testimony tends to be shimmery, inexact, sometimes utterly false even when it comes from eyewitnesses. To say thirteen dead gorillas might actually mean a dozen, or fifteen, or simply lots — too many for an anguished brain to count. People were dying. Memories blur. To say I saw them might mean exactly that, or possibly less. My friend saw them, he’s a close friend, I trust him like I trust my eyes. Or maybe I heard about it on pretty good authority. Thony’s testimony, it seemed to me, belonged in the first epistemological category: reliable, if not necessarily precise. I believed he saw these dead gorillas, roughly thirteen in a group if not a pile he may even have counted them. The image of thirteen gorilla carcasses strewn on the leaf litter was lurid but plausible. Subsequent evidence indicates that gorillas are highly susceptible to Ebola.

Scientific data are another matter, very different from anecdotal testimony. Scientific data don’t shimmer with poetic hyperbole and ambivalence. They are particulate, quantifiable, firm. Fastidiously gathered, rigorously sorted, they can reveal emergent meanings. That’s why Mike Fay was walking across Central Africa with his yellow notebooks: to search for big patterns that might emerge from small masses of data.

Dobbs: This passage speaks to the task we writers take on: We look for emergent patterns. But first we need the data. I want you to describe how that scene that you just read got from the field, where you observed it, back to your desk in Bozeman so you could use it in your book. First the nitty-gritty paper-and-pencil question: How do you take notes in the field?

Quammen: I am very, very old-fashioned and clumsy. I use those long reporter notebooks. This is what a troglodyte I am. The night before I go off on a trip, I take a scissors, I pull out about four of these things and I cut off the bottom inch and a half so this thing is only that long. You know why? Because it fits in a ziplock bag if I do that.

I do a lot of work from jungles, from tropical forests – and my sine qua non field equipment are a ballpoint pen and a chopped-off reporter’s notebook in a ziplock bag. If everything else is gone, if we are swimming across a black lake for our lives, or we are falling down a hillside in the mud, or whatever, I still have my ziplock bag with that one notebook and that ballpoint pen in there.

I know that a trip has been successful at the ten-day or the two- week or the three-week point traveling in Africa or whatever, I reach a point where my notebooks are more valuable to me than my passport. That’s the ideal point. And if you get near the end and you’re still a little bit more concerned about your passport than about your notebooks, it hasn’t been a very good trip…. The full interview has oodles more, so get on over to The Open Notebook for the rest. On Thursday, the site will post a video of the entire hour-long interview from which this text selection is drawn; next week, the second interview, on what happens back at the desk.