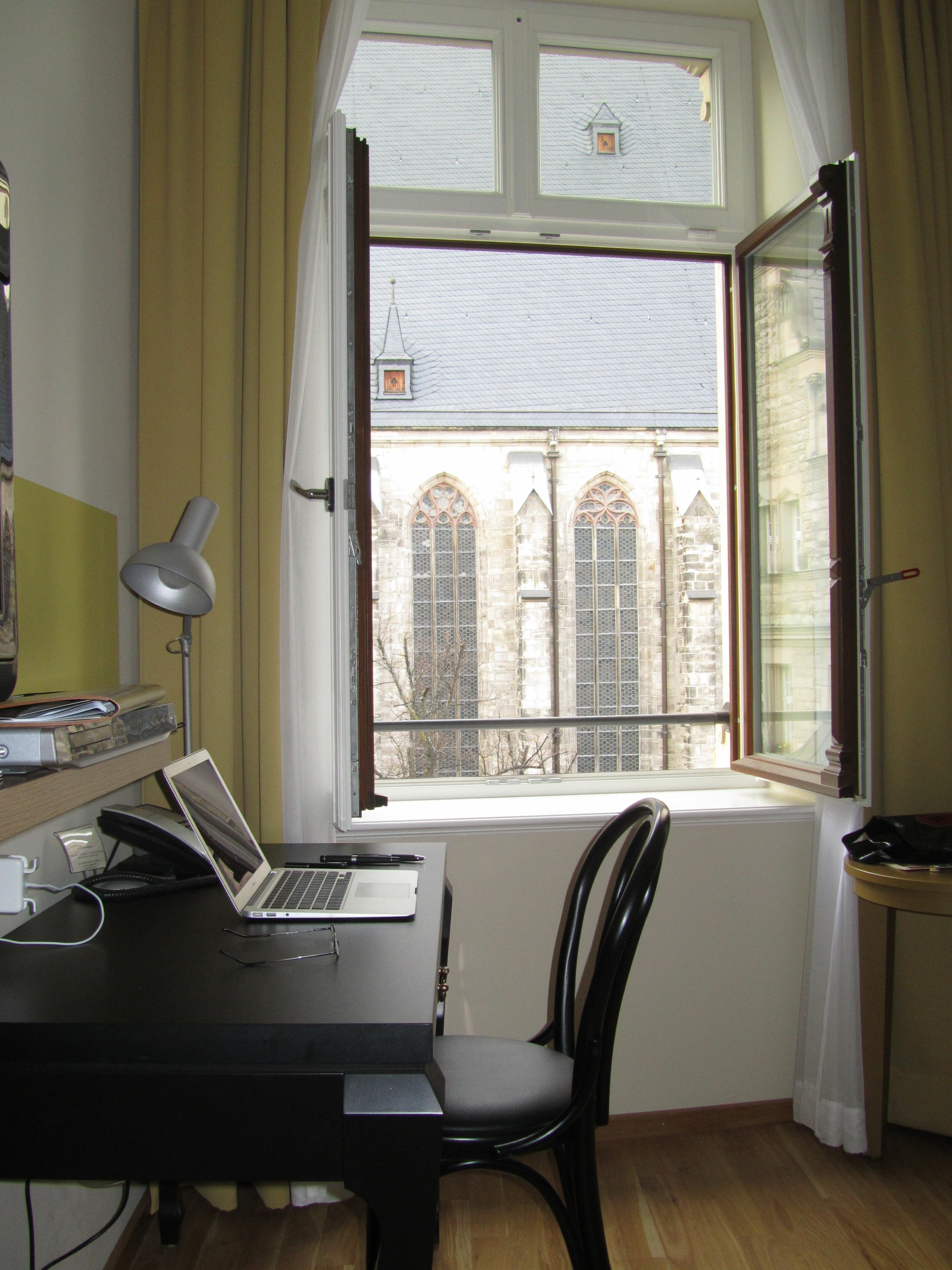 St. Thomas Church, of Leipzig, where Bach did most of his work. From a study in an inn across the square. By author.

The thin documentary trail left by J.S. Bach, this rich review of a new biography notes, means that biographies of this peerless composer, more so than of most of the other great composers of the classical and Romantic eras, have been very much works of their time, since “biographers have been forced to fend for themselves, frequently reimagining Bach through the prism of their own life and times.” This latest biography, Bach: Music in the Castle of Heaven, from the immensely talented conductor and musical historian John Eliot Gardiner, sees him as a sort of bad boy turned good.

Gardiner proposes yet another image of Bach. Moving beyond the hagiographies of the past, he presents a fallible Bach, a musical genius who on the one hand is deeply committed to illuminating and expanding Luther’s teachings through his sacred vocal works (and therefore comes close to Spitta’s Fifth Evangelist), but on the other hand is a rebellious and resentful musician, harboring a lifelong grudge against authority—a personality disorder stemming from a youth spent among ruffians and abusive teachers. Hiding behind Bach, creator of the Matthew Passion and B-Minor Mass, Gardiner suggests, is Bach “the reformed teenage thug.” In the preface we read: “Emphatically, Bach the man was not a bore.”

Gardiner apparently argues that Bach’s experiences gave him particular insight into how to convey  the pain of mortality — “to express the inexpressively, especially with regard to death.” Certainly his family history, like so many family histories in a time when so many died young, supplied plentiful such pain; he was orphaned by ten, lost a wife to sudden death, children too. But for him, perhaps, it started earlier; Gardiner suggests he had “lifelong problems with anger and authority [that] were incubated in the unsavoury atmosphere and environment of his early schooling and in childhood traumas,” including, perhaps, exposure to bullying, beating, and (in what may be a stretcher) rape.

Music in the Castle of Heaven … forces us to rethink Bach’s life and how adversity and faith affected his vocal compositions. And it takes us inside his world, allowing us to see the works from the standpoint of composer, performer, and listener. As Otto Bettmann once remarked, Bach’s “music sets in order what life cannot.”

Which last statement is inarguable.

If you want the shorter, video form, check out Gardiner’s 90-minute BBC program on Bach from a year ago. It’s lovely program. A nice note: Gardiner notes up front that one of the few things well-documented, via Bach’s contract, is how much beer he drank. He liked beer.

via Why Bach Moves Us by George B. Stauffer | The New York Review of Books.