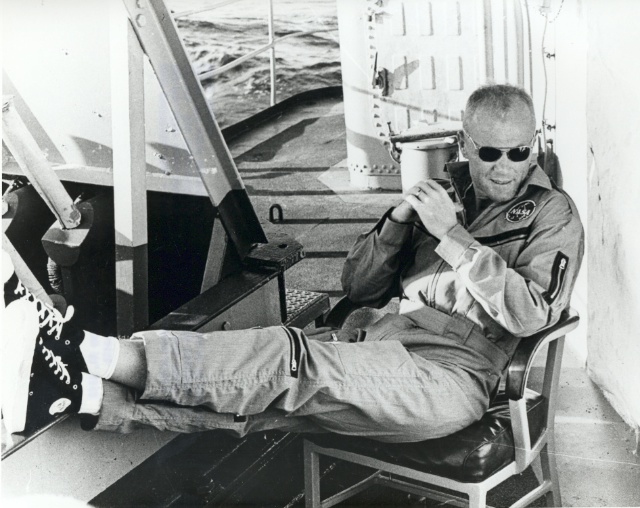 Vacation made me late getting to this, but here are Neuron Culture’s Top Five from February, plus a couple notables that didn’t make the cut.

“Rudolph’s condition gave her pause. He was a two-year-old, nicely grown since she had first trapped him, his red nose healed . . . but there was something on the edge of his right eye. A pink growth, no bigger than a caper. “Oh shit,” she said. Tumor? Or maybe it was just a little wound, puffy and raw. She looked closely. She peered into his mouth. She palpated lymph nodes at the base of his jaw. The volunteers and I waited in silence.”

No Contest: The Coolest Astronaut Photograph Ever

Pictured above: John Glenn, 50 years ago last month, taking his ease on the deck of USS Noa, which plucked him from the Atlantic after he rode a rocket into space and rode round Earth 4 times before plunging through fire back into the atmosphere and smashing into the ocean. A good morning’s work. Plus the shoes.

Is Sensitivity a Curse or a Blessing? My Latest on The Orchid-Dandelion Hypothesis

My latest on the orchid-dandelion hypothesis. Full version to come shortly.

The open-science revolt, catalyzed just a few weeks ago as a reaction to publisher Elsevier’s backing of a clumsy bill introduced to the U.S. .Congress, now has a champion in that Congress, Representative Mike Doyle, a Democrat of Pennsylvania, who has introduced legislation to encourage open access to government-sponsored science. It’s notable that this bill, the Federal Research Public Access Act, seems to have bipartisan support in both houses, including from some, such as Texas’s Republican Senator Kay Bailey Hutchinson, who aren’t exactly of the the radical left. From Doyle’s office

What An Autopsy Looks Like — And Why You Need One

As people milled and talked, the assistant sank a scalpel into the flesh behind the man’s ear and began cutting a high arc behind the rear crown of the skull. When he reached the other ear, he pulled the scalp’s flesh away from the skull a bit, crimped a towel over the front edge of the opening he had made and, using it for grip, pulled the scalp forward over the man’s head. When he was done, the man’s skull lay completely exposed and his inside-out scalp covered his face down to his mouth.

And a couple personal favorites that didn’t make the top 5:

Dissing the Disabled Without Data: A Biologist Mom Punches Back

I’m going to call this Emily’s Law. It’s the law that if your child has a developmental disorder and you’re middle class, eventually someone will accuse you of being in denial about the real nature of your child’s problem, which boils down to either your bad parenting or oppositional defiant disorder (ODD).

How can a decision to sack a city and destroy an entire region’s infrastructure be a sign of empathy? Sherman’s decision can seem sociopathic –  the work of a mind that understands others’ suffering only so he can exploit it. Yet it’s hard to square such a view of Sherman with the extraordinary letter that Ghaemi excerpts in his book.