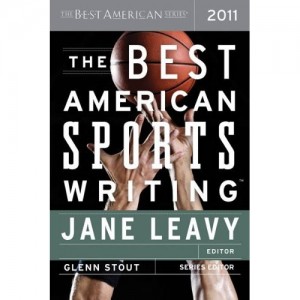 Today’s a good day:  The Tight Collar, my story about choking under pressure, is officially published in Houghton Mifflin Harcourt’s Best American Sports Writing 2011. I’m thrilled that it was selected by guest editor Jane Leavy, who wrote the incomparable bio Sandy Koufax. And I’m deeply honored that my story will run alongside The Patch, a devastatingly beautiful piece about fishing and grief by John McPhee, who has been a major inspiration and teacher-via-reading to me all my writing life. The volume also includes pieces by Sally Jenkins, Chris Jones, Selena Roberts, and P.J. O’Rourke.

Many thanks to Glenn Stout, series editor; Jane Leavy; the incomparable John McPhee; Dean Johnson, former editor at the NY Times magazine Play, who commissioned my story but could not run it because the Times folded the magazine  6 weeks before the story was to run; and to readers who helped make The Tight Collar a hit and spread the word when it was subsequently published here at Neuron Culture. For that’s another thrill: Along with Ed Yong’s story on sushi digestion and Deborah Blum’s beautiful post on her father, both of which are included in the Best American Science Writing 2011 curated by Rebecca Skloot and Floyd Skloot, The Tight Collar appears to be one of the first stories to originally appear self-published on blogs and then make one of these long-established “Best of” anthologies. Extra hat-tips and high-fives to Leavy, the Skloots, and the series editors for recognizing blog posts as writing.

I just ordered my copy. How can you go wrong? It’s a nice fat 384 pages, and “each of these selections transcends its athletic subject,” says Library Journal, which promises “a hit with both sports fans and those who are simply fans of good nonfiction.” Might just get us through the winter. You can can buy The Best American Sports Writing 2011 right here.  (If you use that link, you’ll send a wee welcome bit’o’cash my way as commission. Many thanks.)