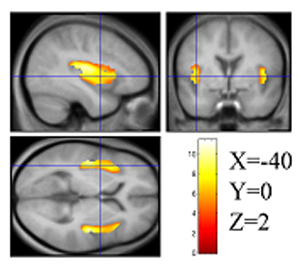 Not really my insula freaking out

The fMRI scan above shows my brain* reading a truly horrific NY Times Op-Ed piece. The piece, written by a man named Martin Lindstrom, who calls himself a “fan of the consumer” (meaning what? he blows on us?), is called You Love Your iPhone. Literally. Literally. Lindstrom claims to see actual love for iPhones declared by the insulas of the 16 people in a scan study he performed. Several people have already spankingly revealed this claim’s bare-assed absurdity, most notably academic researchers Russ Poldrack and Tal Yarkoni, who declare, respectively, that the piece is complete crap that (returning to fan theme) blows it big time. It came to my attention via a spirited take-down by the ever-watchful Neurocritic — a sort of master class in bullshit detection about fMRI studies that claim to see Specific Emotion X rooted in Area Y of the brain.

As Poldrack, Yarkoni, and Neurocritic note, Lindstrom’s big fail is that he claims to spot clear sign of a very specific emotion — not just love, but iPhone love — in an area that shows up active in about a third of all fMRI studies [PDF]. This is the insula. These insula studies include quite a few that find the insula fire up when people feel disgust; one is one of my favorite fMRI titles ever, “Both of Us Disgusted in My Insula.”

And it’s not just love and disgust that can stir your insula. As Neurocritic describes (quoting him- or herself, which really fires up my insula, in a good way):

[The insula]’s a pretty large area. Besides being crowned the “seat of emotional reactions” (whatever that means), portions of the insula have been associated with interoceptive awareness, visceral sensation, pain, autonomic control, and taste, among other things… a lot of other things. Do a search of the BrainMap database using just two of the many insular foci reported by the Caltech researchers [Hsu et al., 2008] and you’ll see activations related to action execution, speech, attention, language, explicit memory, working memory, and audition.

It’s a shame the Times ran such a thing on their Op-Ed page, which remains one of  the most prominent platforms in all of print media. It’s significant, methinks, that it did NOT run in the Times science section; would never have passed muster there. You Love Your iPhone. Literally. Really?

Among Lindstrom’s books is one called Buyology. Seriously. I’m not buying it. Not literally. Not no way, no how.

If you want something good to read, hit those three blogs I linked to above: Neurocritic; Russ Poldrack; and Tarkoni’s [citation needed]. They’re all splendid.

*Not really my brain. It is, however, an insula firing up. Image from University of Cambridge Center for Speech and Language.