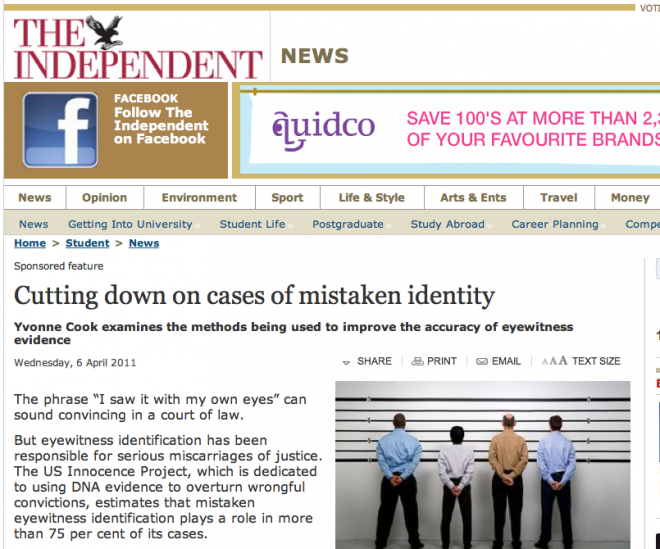 Last summer I and many others left ScienceBlogs, our blog host, because its publisher had sold to Pepsi a blog slot that looked in every essential like the a normal blog slot written by people who were there — and assumed to be there — to communicate rather than sell. This little but important tempest was inevitably labeled PepsiGate. The key issue, at least to me, was that the bought advertorial content (that is, bought by the company that was writing it) was presented in a way that invited readers to mistake it as editorial content (that is, content written by people hired and published because they brought an outside view to things they wrote about.) The incident sparked a lot of discussion about how to distinguish, as good publications always have, between material written from a roughly disinterested and critical editorial point of view and what are essentially ads or PR written by people tooting their own horns.

Yesterday’s Independent  ran a piece that violates those editorial principles. Apparently someone wasn’t paying attention. They ran a piece that the Open University  wrote about research done by Open University researchers. It’s actually an interesting piece, but it’s still a piece of publicity masquerading as news, and it sets a terrible precedent.

The only indication that it is not news written by reporter is a very small and easy to miss line that says Sponsored Content. It doesn’t exactly jump off the page at you (see below).

Does this fool people?  Yes. In fact, this came to my attention when a perfectly savvy media person, the editor of Research Diggest, published a tweet about the piece because he’d failed to notice it was sponsored content. I am sure it is fooling more readers right now. If it were April Fools Day, I would suspect we were being presented a joke drawing on puns about terms like Independent and Open University and reliability of information. But that’s not what were seeing. We’re seeing something much darker.

I hope this Independent reconsiders its policy and, where it runs advertising, makes it absolutely clear to readers that it is advertising. As it is, it has signaled that it is willing to violate its readers trust by presenting paid content for editorial. In this case the content  is about the reliability of eyewitness reports. In another case it might be about a new wonder drug that might or might not really work — and might in fact be bad for you — or a sketchy finding about vaccines that might or might not have any integrity.

Note: Below is a fuller image of the page. I’d wager the average reader stands little chance of noting the print that says “Sponsoered Feature.” I feel confident an eye-tracking study of naive subjects would show exactly that. And there’s nothing else to alert you. Everything about the page that says it’s editorial — all those many elements expressly designed to distinguish this as editorial content of an independent newspaper called The Independent — is there, with the sole exception of a single, small-font declaration squeezed between two more far more prominent chunks of type, one of them being the headline. The article itself speaks of the Open University as a third party, as if it’s reporting from outside. 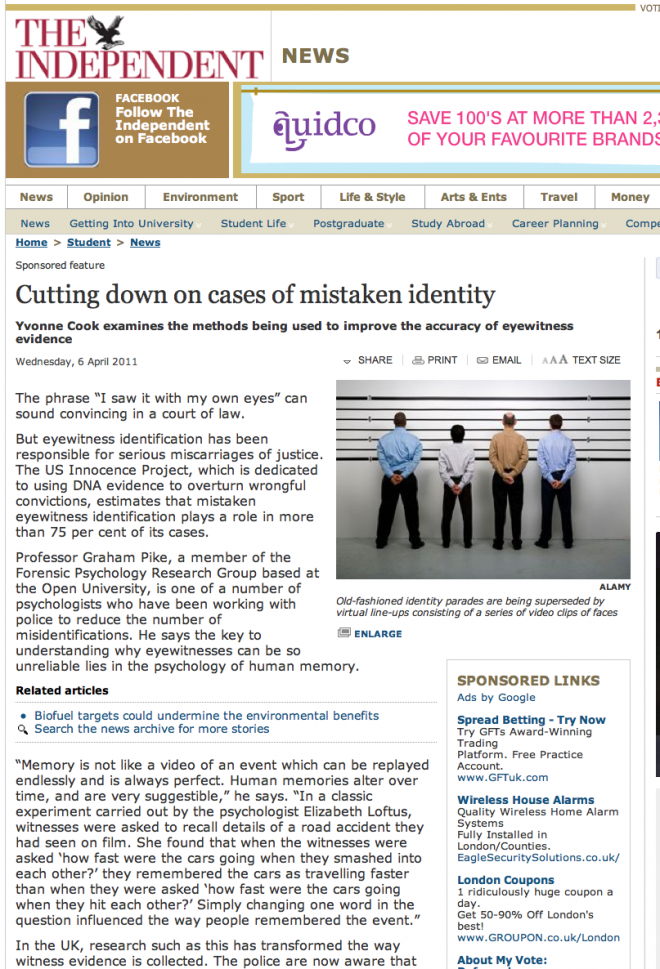