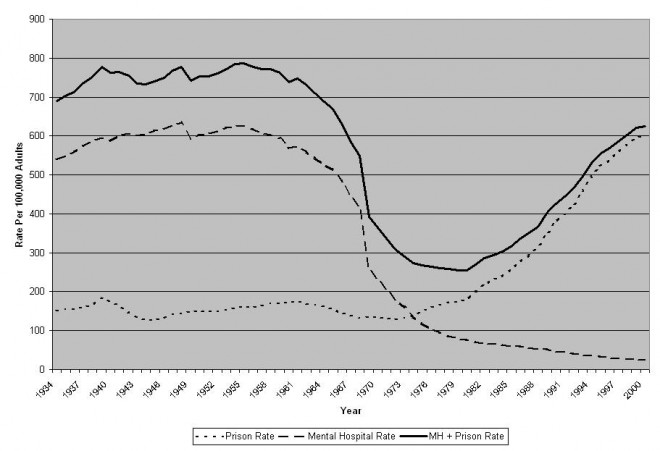 Closure of mental hospitals and rise in prison rates, 1934-2010, US. From Bernard Harcourt

The medical resident PetulantSkeptic drew my attention to the graph above, which he included in a short, sad post he wrote last fall:

I’m currently doing a psychiatry rotation at an outpatient behavioral health clinic which primarily serves the substantial indigent population here. I’ve tried to sit down and write about the experience but all that comes out is a structureless jeremiad about the tragedy of a shredded safety net and those with psychiatric problems.

Rather than subject you to that I’d rather just present this chart by Bernard Harcourt.

The graph comes from a paper that Harcourt, a criminologist, wrote after the Virginia Tech shootings in 2007, which he blogged about at the Volokh Conspiracy:

Was the tragic incident at Virginia Tech the result of a failure of Virginia’s mental health system? Slate recently posted Seung-Hui Cho’s commitment papers and they are revealing: the magistrate who heard Cho’s case determined that he was “an imminent danger to himself as a result of mental illness,” but determined that there were “alternatives to involuntary hospitalization.”

After the shooting, Sally Satel at AEI argued that Virginia needs to reexamine its involuntary treatment laws and adopt a lower threshold for commitment, more in line with states like Arkansas and Hawai’i. Others, like Brian Jenkins at RAND, contend that the tragedy probably could not have been prevented and might not have a solution.

It’s impossible to make sense of the debate, though, without understanding the extent to which we’ve dismantled our mental health system in this country. Brick-by-brick, cell-by-cell, we deconstructed what was once a massive mental hospital complex and built in its place a huge prison.

We should not be surprised that there are so many persons with mental illness behind bars today. We deal with perceived deviance differently than we did in the past: instead of getting treatment, persons who are viewed as deviant or dangerous are going to jail rather than mental hospitals.

The second is that we should not be surprised that our mental health systems are in crisis today. The infrastructure is simply not there. This is evident in states across the country where persons with mental illness are being housed in jails rather than treatment facilities.

He’s not arguing for more institutionalization — but for better treatment. See his post or the paper for more.

I agree too with the many who feel our gun culture — from easy ownership and defend-your-turf laws to a fetishization of violence — makes it far more likely that the violently inclined will express their fury in spectacular ways like the Aurora shooting. I don’t think you can separate the development of an obsessive psychotic fixation from the culture in which it develops; this is why we see these mass shootings so often here in the U.S. and so seldom elsewhere. The list of mass shootings in the U.S. since 2005 alone runs 62 pages. Is it coincidence that the alleged shooter dressed up in SWAT-team-like gear? I found it chilling and somehow utterly normal, almost expected, that (if this account is correct), after shooting 71 people in a theater amid a screenplay that reportedly made some at first think this strange live-action before the screen was part of the show, the shooter went outside to his car in the parking lot and there surrendered without trouble to police similarly clad and armed. I found it too easy to imagine that he felt a sort of fraternity with his new captors.

We’ve reached a point where it all feels quite scripted. Yet no one seems tired of this movie.