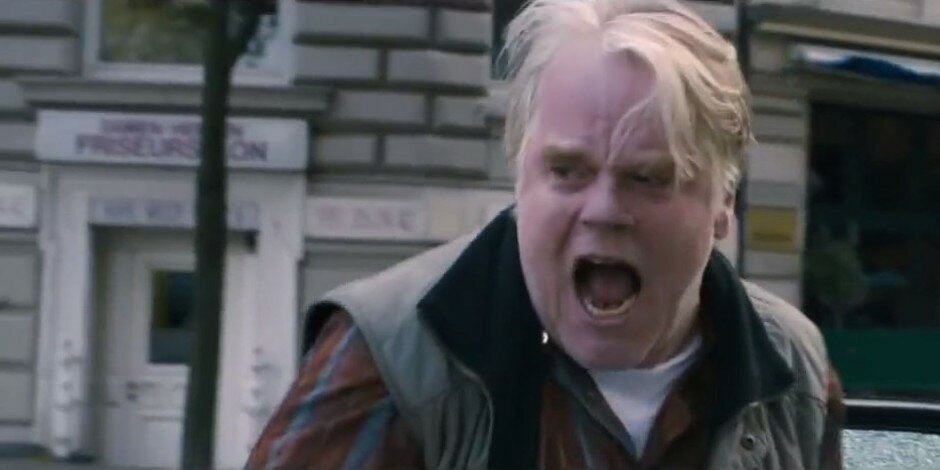 Philip Seymour Hoffman in “A Man Most Wanted”

As David Denby notes in a satisfying review, “A Most Wanted Man,” made from the John le Carre film of the same title, makes an apt goodbye from Philip Seymour Hoffman.

The movie, as if in homage to Smiley’s Cold War days, returns to the old-fashioned trappings of espionage: cigarette-pack drop-offs of intelligence, planted bugs and surveillance cameras, meetings in forlorn dives. Corbijn’s previous film, “The American,” which starred George Clooney as a hired assassin, was unconvincing and absurdly chic, but the director has sobered up. He stages several conversations between [Phlip Semour Hoffman’s] Bachmann and Martha Sullivan (Robin Wright), a charming C.I.A. official who understands Bachmann’s needs but may be playing him, and Corbijn and the actors skillfully bring out the sinister undertones in these exchanges. They’re the best thing in the movie, but a familiar problem arises: le Carré’s complicated plot and his thrillingly cryptic dialogue can’t be adequately conveyed in two hours. The finest dramatization of le Carré remains the BBC’s 1979 seven-part adaptation of “Tinker Tailor Soldier Spy,” directed by John Irvin, in which the elaborate mock-politeness of élite English manners garlands the arcane conspiracies at glorious length.

Bachmann’s nature seems to reflect Hoffman’s unsettled state in his final days. Bachmann smokes constantly and pours himself whiskey neat. Hoffman, his shirt hanging out, tears through rooms, growling at everyone in German-accented English. He almost never smiles, almost never looks at people until he turns threateningly toward them with a bulldog frown. The film gives le Carré’s bitterly intelligent man some streaks of tenderness, which bring him closer to a conventional movie hero. Yet the heroic quality in Hoffman doesn’t need softening. A great actor, he carried his despair and his outsized sense of responsibility with him to the end.

I saw the film last night and find Denby spot on regarding both film and Hoffman. The film’s shortcomings are minor, its strengths immensely rewarding.

I would only add this to amplify Denby’s take. At one point in the film, Hoffman’s character, Gunter Bachmann, who as Denby notes is a sullen dangerous bulldog through most of the film, experiences a brief moment of pleasure. It comes in one of those scenes with Robin Wright (who plays a CIA agent), when Bachmann/Hoffman manages to turn a jingoist phrase that Wright used earlier in the film back against her, winning a small but gratifying victory. (Alas, it will prove temporary.) We see him deliver this “gotcha” from a camera placed at Wright’s point-of-view, so that Hoffman is looking straight at us when he says it. And when he delivers his zinger, he gives her — and thus us — a splendid smile of intelligent joy. Actually he doesn’t give the smile; rather the smile unexpectedly amidst all his troubles, suddenly takes over his face, surprising even him with its unlikely appearance; to direct it at his rival only increases his delight. Next to this grin, the celebrated smiles of Tom Cruise are dun.

It is Bachmann’s only moment of joy. It is easily the film’s happiest moment — and with its reminder of what we lost when we lost Hoffman, the film’s saddest moment as well.