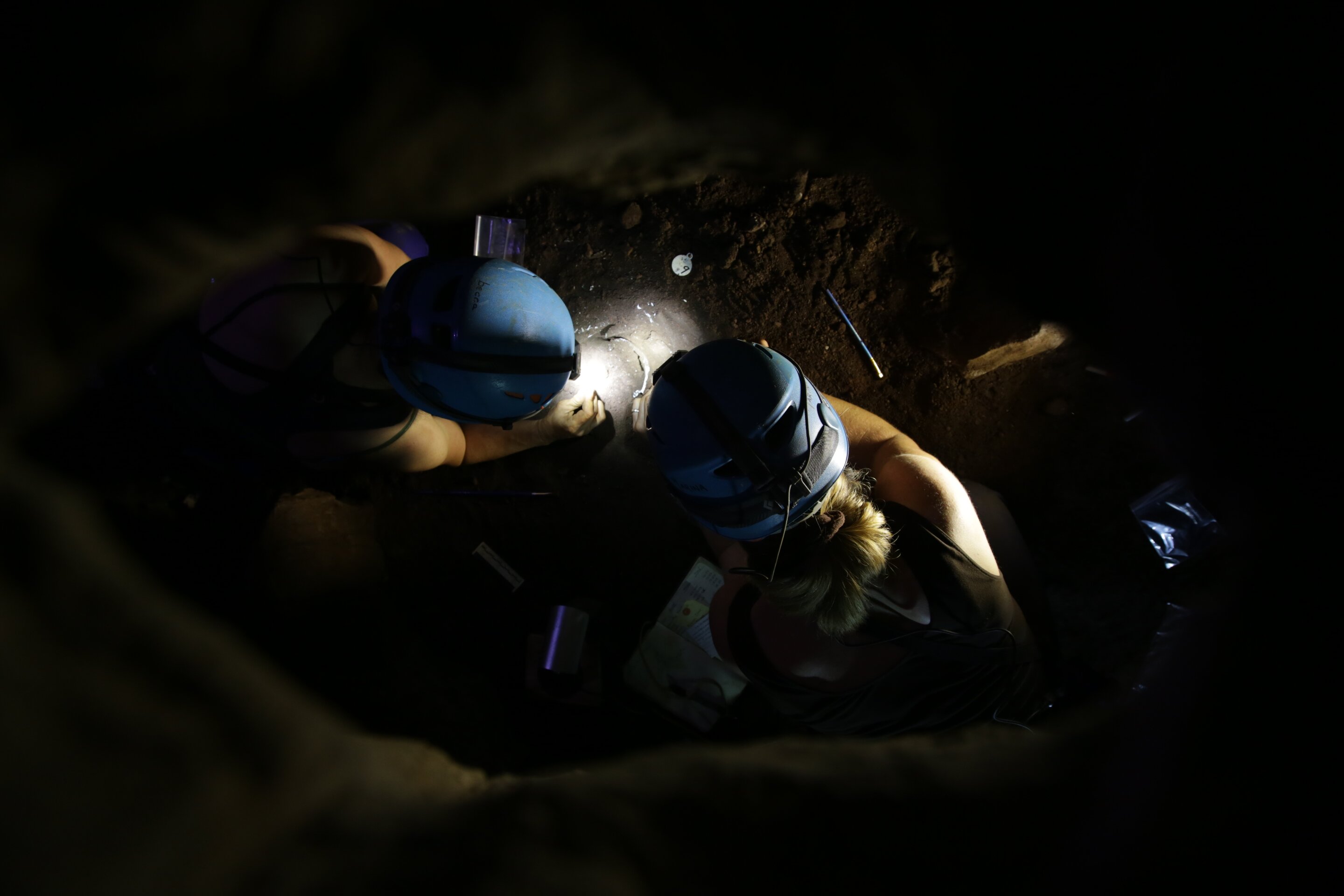 Scientists 100 feet underground at the Rising Star excavation carefully remove part of a hominid skull buried there for ages. Photo by Garrreth Bird, used with permission of National Geographic.

One of my favorite things this week: John Hawks on the magnificent open-science real-time-science excavation of a newly discovered human fossil dig going on right now in South Africa. Do read the whole thing; what they’re doing there is radical, disruptive, inspiring, and wonderful:

In my last post (“In the hot seat”), I explained how we are making this the most open paleoanthropological excavation ever. In this one, I’ll explain why we aren’t answering many of the questions people have been asking on Twitter, by Facebook, and email. “What species is it?” “How old are the fossils?” “How many individuals are there?”

It’s simple: We don’t know. Believe me, we wish we did!

The first publication answers those basic questions, “What species is it?” “How old are the fossils?” “How many individuals are there?” The millions of people who follow paleoanthropology usually find out about the research second- or third-hand, by press release.

That highly controlled approach creates the misconception that fossils come out of the ground with labels attached. Or worse, that discovery comes from cloaked geniuses instead of open discussion.

We’re hoping to combat these misconceptions by pursuing an open approach. This is today’s evolutionary science, not the science of fifty years ago.

It will take many months, even years, to make the careful comparisons needed to answer these elementary questions. This isn’t the kind of science that can be crowdsourced. Just as it takes training to go into that cave, it takes training to be able to carry out the kind of analyses we’ll be doing on these fossil remains. Our approach will bring in young scientists to work with the collection, building a collaborative team and documenting our work as we go.

That’s another way that our approach differs from legacy paleoanthropology. After the initial publication appears, the legacy model continues to keep many details quiet, as a small group of scientists assemble a fuller description of the fossils. During this twilight period, some teams allow outside scientists to examine their collections. Other teams bar outside scientists altogether, sometimes for many years.

That hasn’t happened with the Malapa Project, and it will not happen with Rising Star.

Hawks follows with a fascinating FAQ about what it’s like to work one of these sites. The answers to many of the FAQs — questions such as “What species do these fossils represent” and “Will there be DNA in the fossils?” — are variations on “We don’t know. We really don’t.”

Which sets up my favorite:

So if you don’t know any of the answers, what use is it to release anything?

Go check this out at  What We Know and Don’t Know So Far, explore the story further there, and follow Hawks on Twitter. This is just splendid stuff, a bold, all-in attempt to do open-science anthropology from the first touch of the first tool.