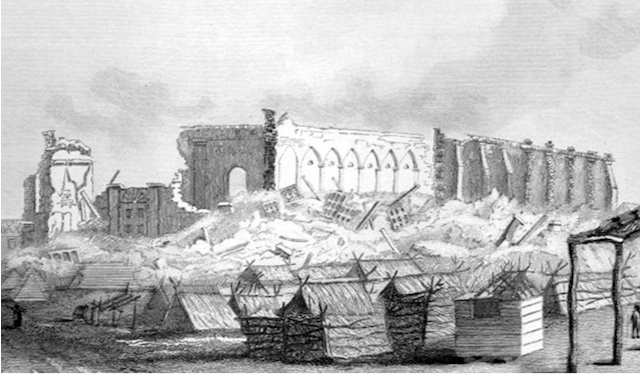 This is the 10th installment of an abridged version of my book Reef Madness: Alexander Agassiz, Charles Darwin, and the Meaning of Coral. (Earlier installments are listed at bottom.) Here a quake in Chile rearranges Darwin’s thinking about the earth — and lays the foundation for his coral reef theory.

Darwin found geology in the Andes so enthralling, he wrote his sister, that he “could hardly sleep at night for thinking over my days work.” Through much of 1834 and most of 1835 he took long horseback expeditions all over the still-rising Cordillera and its flanking ranges. Ignoring the ocean almost completely and leaving most zoological collecting to his assistant, he paused in his travels only when he had to reboard the Beagle to travel up the coast or, twice, when gastrointestinal torments laid him out. (Though these illnesses were apparently genuine, probably due to intestinal parasites, they seem to have laid the mental seed for the psychosomatic gastric distresses of his later life.)

Roaming the Andes in clear light, he found they beautifully demonstrated Lyell’s long, incremental view of the earth’s construction. “The stratification in all the mountains is beautifully distinct and from a variety in the colour can be seen at great distances,” he wrote Henslow; they lay like the page-edges of a book. “I cannot imagine any part of the world presenting a more extraordinary scene of the breaking up of the crust of the globe.”

He was not there long before witnessing this breaking up directly. On February 20, 1835, he was camping in the dense forest of southern Chile when a massive earthquake struck. Though Darwin was some twenty miles from the epicenter, the quake rearranged his visceral sense of the earth as thoroughly as Lyell had rearranged his theoretical conception of it.

An earthquake like this at once destroys the oldest associations; the world, the very emblem of all that is solid, moves beneath our feet like a crust over a fluid; a second of time conveys to the mind a strange idea of insecurity, which hours of reflection would never create.

He told Henslow that the sensation underfoot was “like that of skating over very thin ice; that is distinct undulations were perceptible.” The unsettling feeling was reinforced when he visited Concepcion, a port city of several thousand people that stood (briefly) at the quake’s focal point. He found the town “nothing more than piles and lines of bricks, tiles, and timbers,” he wrote his sister Caroline. “It is the most awful spectacle I ever beheld.”

The force of the shock must have been immense. The ground is traversed by rents, the solid rocks are shivered, [the cathedral’s] solid buttresses 6-10 feet thick are broken in to fragments like so much biscuit.

Seventy villages in the nearby countryside were similarly destroyed. Only the animals seemed to have sensed it coming. Gulls were seen heading inland two hours before the quake, and Concepcion’s dogs, which typically howled “as if hearing military music” during low-grade tremors common in the area, quietly left about an hour before the shock; they were standing on the surrounding hills when the quake hit and came slinking back afterwards. The earth’s undulations threw cattle and horses to the ground, from which they rose “exceedingly terrified, running about as if mad, with their tails in the air.” Cows on one steep slope rolled into the sea. Trees slammed against one another. Jets of lava burst from the water near the beach. After the earth stopped moving, huge swells appeared on the Pacific horizon; a quarter hour later, waves 25 feet tall slammed ashore and smashed their several hundred feet inland, dumping schooners onto the middle of town and carrying away anything that floated. Afterwards, “the coast was strewed over with timber and furniture as if a thousand great ships had been wrecked. Besides chairs, tables, bookshelves &c &c in great numbers, there were several roofs of cottages almost entire, Store houses had been burst open, and in all parts great bags of cotton, Yerba [maté], and other valuable merchandise were scattered about.” It was one of the most violent quakes ever to strike South America.

Though several hundred people died in Concepcion, the quake would have killed many more had it struck at night. Thousands survived because they were working outdoors and or, if indoors, had “the constant habit,” as Darwin noted, “… of running out of their houses instantly on perceiving the first trembling…. The inhabitants scarcely passed their thresholds before the houses fell in.” The English consul, for instance, scrambled outside at the first motion; he had just reached the courtyard

when one side of his house came thundering down; he retained presence of mind to remember that if he once got on the top of that part which had already fallen, he should be safe; not being able, from the motion of the ground, to stand on his legs he crawled up on his hands & knees; no sooner had he ascended this little eminence, than the other side of the house fell in; the great beams sweeping close in front of his head.

For the rest of his life, Darwin often called this earthquake the most fascinating spectacle he’d ever seen, and that he considered earthquakes “one of the greatest phenomena to which this world is subject.” Their possible cause intrigued him. Humboldt, in the six-volume work Darwin read so many times, had offered that quakes were caused by the same subterranean pressures that drove volcanoes and argued that they played a role in lifting the Andes. Lyell had expanded on this quake-volcano connection in the first volume of Principles, speculating that quakes were essentially repressed volcanoes — would-be eruptions that couldn’t escape and so lifted the earth instead.

Now Darwin, privileged to be on hand at a major quake, was thrilled to find that much of the land had indeed risen. The bay around Concepcion jumped two to three feet, as shown by the rim of mollusks, barnacles, and other sea-edge life now a yard up out of the water. The island of Santa Maria, thirty miles offshore, rumbled upwards eight feet out of the water. Other spots along the coast rose up to a dozen feet. Darwin was almost giddy at finding all this. Having come to ponder what built the Andes, he had seen them grow several feet. He also talked to locals who told of harbor shores that over the previous two decades had risen four feet in unnoticeable increments (as evidenced by the rise of dock anchors and other things they knew were formerly at the surface); it seemed that along with moving in jumps of a few feet, the earth also rose steadily and less violently, en masse, at rates almost too slow to measure.

In the weeks after the earthquake, wandering the barren heights and canyons of the Andes, Darwin found yet more evidence of such gradual elevation. Canyon walls showed layers tilted upward by some uprising force. The “strata of the highest pinnacles,” he wrote his sister Caroline, were “tossed about like the crust of a broken pie.” These upsurges had clearly occurred in stages, not the one-rip mountain-building spasms the catastrophists proposed. He found seashells and coral at numerous heights — at shoreline, at elevations of a few dozen, a few score, and a few hundred feet, at 1300 and 3000 feet, and finally, at 12,000 feet. Only a series of rises over time could explain this.

Consolidating bits from Lyell, Humboldt, and a few others, Darwin formed a theory of mountain building that saw volcanoes and earthquakes as part of a dynamic that could either slowly lift land, rend it, or suddenly lift it several feet. Driving these movements was a layer of molten rock, varying in thickness and pressure, that lay beneath the earth’s crust. Lyell, Humboldt, and many others had written of cavities of such molten or gaseous material underlying volcanic regions, but Darwin was one of the earliest to propose that a concentric layer of such material wrapped the entire globe, and that it was either more active or closer to the surface in some areas than in others. In a theory that anticipated plate tectonics, he proposed that most or all of South America floated atop this layer of molten rock and lava, the pressure from which gradually raised most of the continent through long periods and also occasionally caused volcanoes or earthquakes or pushed the range sharply up via “angular displacement” caused by the injection of lava beneath.

Finally, if he was to believe what he saw, the land did not merely rise; it often dropped. Amid the volcanically formed layers of the Andes he found layers of sedimentary rock — earth laid down through millennia of deposition and compression. Some of these layers held marine fossils, making it clear they had formed underwater. The most spectacular find, which he stumbled across at around 7000 feet, was a grove of large, pale, smooth, ancient trees preserved in sandstone that held seashells; clearly the trees had grown hundreds of years on land, then ridden a subsiding land mass down below sea level, where eons’ worth of sediment — now sandstone — accumulated around them before the Andes rose again to lift them high. This was only one of many arresting finds. By the time Darwin was done, he had found evidence of two or three cycles of uplift and subsidence that had carried South America several thousand feet above sea level and at least two thousand feet below.

The earth’s crust, then, bobbed up and down almost constantly. The relation any expanse of crust bore to sea level depended on timing, the pressures beneath it, and, no doubt, some factors that no one yet understood. Like Lyell before him, Darwin stressed that, given the difficulty of knowing what happened underground, any theory regarding earthquakes, elevation, or subsidence entailed considerable speculation. Still, some things seemed clear. It seemed clear, for instance, that some areas tended to move more up than down, or vice-versa, which is why the Andes’ up and down cycle left them ever higher. The same would apply to sunken areas. Lyell had speculated that falling land or sea floors subsided when underlying cavities collapsed after their pressurized lava, steam, or gas escaped or condensed. But Darwin, happily insomnious with his vision of South America rising on swelling magma, thought this notion of collapsed lakes small thinking. The crust’s movements might be slow, but they were large. And as Lyell had suggested, a rise in one place tended to be balanced by a drop somewhere else. If the molten layer beneath the crust could lift whole continents, then perhaps the floors of entire oceans were also dropping en masse.

Which invited the question: How did all these rising and subsiding forces operate in the huge bowl of water to his west? What did one make of the vast basin of the Pacific and its coralline archipelagos?

Reef Madness 2: The One Darwin Really DID Get Wrong: Rumble at Glen Roy | Wired Science | Wired.com

Buy Reef Madness at your favorite US independent bookstore

or at Amazon US, Amazon UK, Barnes and Noble, or Google eBook Store.