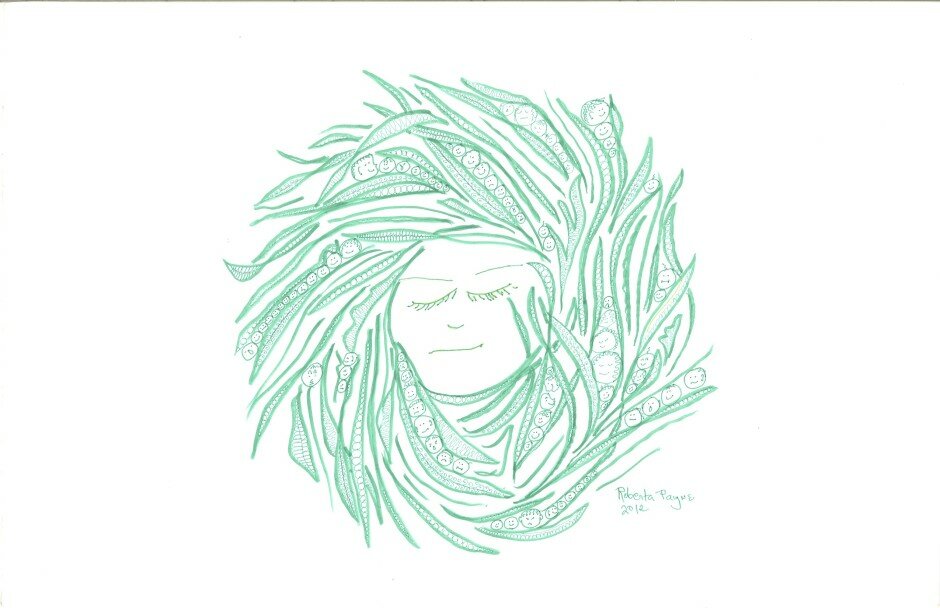 Roberta Payne, author of the superb memoir Speaking to My Madness, did the cover art on the current issue of Schizophrenia Bulletin. The issue also runs an essay she wrote about “schizophrenic art.”

I once drew on poster-size paper a gracefully diagonal, writhing black eel. So far, conventional structure that any artist might have planned. But the eel’s mouth was a circle of jagged teeth, out of which poured, in lovely calligraphy, words, phrases, and sentences about the nature of evil. (This was in response to the Aurora theater shootings.) I can’t imagine that this drawing would be anything but abnormally chilling to a consensus-reality viewer, chilling like the hallucinations of huge, neon, electric spiders slithering down walls struck me decades ago, when I experienced delirium tremens from alcohol withdrawal. The (usually anonymous) schizophrenic art I have viewed in books and on the Internet often has unique, otherworldly traits, especially aesthetics that remind the viewer of isolation, of a world made of metal, and bone-rattling electricity. It could be that the avoidance of aesthetic revulsion (a kind of fear) is a tactic that consensus reality uses to maintain its balance.

The most extreme example of creating repulsiveness takes place for me when I’ve been drawing while paranoid. I’m appalled by what I’ve drawn, just as I’m appalled by the paranoia itself, which feels like fear and anger experienced simultaneously. The figures I draw are nasty, sneering, in a world I want to run from: weird bats, black crows with huge wingspans, eerie owls uttering phrases in Latin. I’ve often hid those drawings, afraid of their power over me, and afraid of the startled reactions of others.

How is this different from, say, Diane Arbus’ photographs of the grotesque, of people malformed and the stuff of sideshows, subjects whom she admitted to hating? It would be easy to say that she chose of her own free will to take those particular photographs, that they were not in any way commanded by internal demons. My guess is that she was just as artistically driven to take them as a psychotic artist is to draw or paint her vision. But Arbus in her prime stood out nearly alone in her vision. Producing psychotic art, on the other hand, is quite common among schizophrenics; and I have heard both clinicians, researchers, schizophrenics themselves, as well as members of the general public refer to the rich, creative, artistic bent that seems at times to accompany the illness.

As I am currently writing an article about, among other things, how our culture reacts to schizophrenia by isolating the person suffering it — and how destructive that isolation is — I’m pleased to see that Roberta’s portrait of a happier state of mind and being shows other people, themselves in various states of mood, nestled into the persons’ hair like peas in pods.