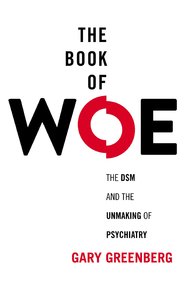 Note: This review first appeared in Nature, 2 May 2012. My thanks to Nature for the commission and fine editorial support.

When it is published later this month, the fifth edition of the American Psychiatric Association’s Diagnostic and Statistical Manual, DSM-5, will mark well over a century of formal guides to psychiatric diagnosis. The first two psychiatric taxonomies were produced by Emil Kraepelin in 1893 and Thomas Salmon in 1918. Kraepelin’s included not only schizophrenia and what we now as bipolar disorder, but also “masturbatory insanity” and (hopefully unrelated) “wedding night psychosis”, both of which soon fell out of favour. Salmon’s contained a mere 20 diagnoses. The DSM-5, intended to be the primary US guide to mental-health diagnoses, is expected to include some 300. These will reportedly include new entries aimed at hoarding and binge eating, and a relaxed depression diagnosis that allows therapists to classify someone grieving a loved one’s death for more than two weeks as depressed rather than, well, grieving.

Each such manual, DSM or outliers, has tried to improve on its predecessor. All have failed, says psychotherapist Gary Greenberg in his entertaining, biting and essential The Book of Woe. But none have failed so spectacularly as the DSM-5.

For the first quarter of this packed but swift-reading book, Greenberg reviews how these earlier manuals — including the 1952, 1968, 1980 and 1994 editions of the DSM — reflected and shaped psychiatry. The history nicely sets up his main subject, which is the long, tangled efforts of the book’s publisher, the American Psychiatric Association (APA), to create this fifth edition. Even as the APA started on the DSM-5 more than a decade ago, psychiatry was suffering deep and painful divisions over issues such as overdiagnosis, overtreatment and overmedication; its problematic ties to the pharmaceuticals industry; and a shortage of demonstrable biological pathways for most diagnoses. The APA, which depends heavily on revenue from the sale of the DSM-IV, responded to these controversies by vigorously defending the manual — while promising to create a fifth edition that would draw on new paradigms.

From the adventure in bookmaking-by-committee that followed, Greenberg builds a splendid and horrifying read. He digs up delicious dirt; extracts from the rivalrous main players a treasure chest of kvetching, backbiting, rebuttal, regret, sibling rivalry, Oedipal undercutting and just plain pithy talk; and relates gruesome sausage-making stories about the APA’s tortured attempts to refashion rusty diagnoses or forge shiny new ones. (The aetiology of that new temper-tantrum disorder? You’ll throw a fit.) He even managed to become a tester in one of the draft manual’s clinician field trials. The process proved so convoluted that Greenberg wanted to apologize to one patient for the “inadequacy, the pointlessness, the sheer idiocy of the exercise”. He never got the chance: she never called again.

The DSM, Greenberg concludes, is “a book that dresses up symptoms as diseases that are not real and then claims to have named and described the true varieties of our suffering”. Technically, the APA concurs, admitting sotto voce (for instance, in planning documents and public discussions for earlier versions of the DSM) that many psychiatric diagnoses are constructs of convenience rather than descriptions of biological ailments. This originates in an explicit decision the APA made, during the creation of DSM-III, to base diagnoses not on aetiology but on recognizable clusters of symptoms that seem problematic. The APA did so recognizing that this would mean stressing consistency among clinicians in recognizing symptom clusters rather than any other marker of a condition’s origins.

A slippery deal, but essential. For by formalizing this scheme, psychiatry can claim medical legitimacy (and accompanying insurance coverage and pay rates) so that it can help people. Unfortunately, writes Greenberg, this scheme has led everyone, psychiatrists included, to talk about and treat DSM’s conceptual constructs as if they are biological illnesses — a habit that has bred troubles ranging from overconfidence to incestuous liaisons with Big Pharma.

Greenberg is in rough harmony with not just many clinicians but longtime psychiatric leaders such as DSM-IV editor Allen Frances, whose own diatribe, Saving Normal (William Morrow), to be published this month, charges that the DSM-5 will “turn overdiagnosis into hyperdiagnosis”, and Thomas Insel, the psychiatrist who directs the US National Institute of Mental Health in Rockville, Maryland. Insel tells Greenberg that he hears constantly from psychiatrists who feel trapped by the DSM, and that perhaps it’s time to “just sort of start over”.

Or does the scheme work just well enough to stay afloat? As Greenberg notes, the DSM’s diagnoses sometimes work. For many people with Asperger’s syndrome, for instance — a diagnosis introduced only 19 years ago in the DSM-IV — the label helps them forge a coherent identity, perhaps because it lies outside the norm from which they already feel excluded. The differentiation centres rather than marginalizes them. Or, as one person with the condition tells Greenberg, “It meant I’m not an asshole. I’m just wired differently.”

To be diagnostically accurate, I should say that a former patient with the condition said that the DSM-5 has expunged Asperger’s, folding it into a tightened autism spectrum disorder diagnosis. Studies suggest that anywhere from one-third to three-quarters of those with Asperger’s will fail to secure one of these new autism diagnoses and the accompanying health-insurance coverage and other benefits. And for those who do secure one, few are likely to find in the autism diagnosis the same satisfying fit between workable description and recognizable self-identity.

The annihilation of Asperger’s suggests what may be a key part of psychiatry’s tension. As Greenberg writes, the DSM, and psychiatry with it, increasingly “casts its subjects into dry, data-driven stories, freed from the vagaries of hope and desire, of prejudice and ignorance and fear, and anchored instead in the laws of nature”. Yet when psychiatry works, it often works less essentially at a biological than at a humanistic, narrative level, by helping the sufferer to reframe the story of his life and of his place in the world into one that includes a sense of agency, strength and social connection. This is doubtless why drugs and talk therapy generally work better than just drugs. It also helps to explain why schizophrenia, as described in Ethan Watters’ fine Crazy Like Us: The Globalization of the American Psyche (Free Press, 2010) and in work by Tanya Luhrmann, is much less disabling in cultures — or even treatment — regimes that cast its eccentricities more as variations in human nature than as biological dysfunction.

For more than 100 years, psychiatry has been getting by on pseudo-scientific explanations and confident nods while it waited for the day, always just around the corner, in which psychiatry could be a strictly biological undertaking. Part of the DSM-5’s long delay occurred because, a decade ago, APA leaders actually thought that advances in neuroscience would allow them write a brain-based DSM. Yet, as former APA frontliner Michael First, a psychiatrist at Columbia University in New York, confirms on Greenfield’s last page, the discipline remains in its infancy.

Greenberg shows us vividly that psychiatry’s biggest problem may be a stubborn reluctance to admit its immaturity. And we all know how things go when you won’t admit your problems.