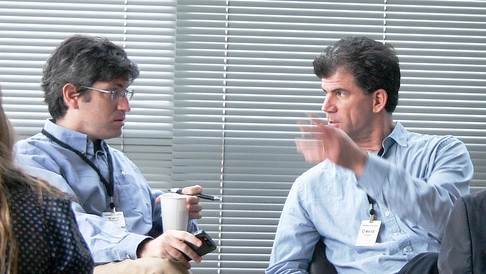 Me (right) hypnotizing Carl Zimmer just before the Rebooting Science Journalism session at ScienceOnline 2010. It worked. Carl had planned to use his 5 minutes to just say, “We are DOOOMED.” Instead he talked about duck sex.

I’ve been meaning for two weeks now to post on ScienceOnline 2010 and the Rebooting Science Journalism session, in which I joined Ed Yong, John Timmer, and Carl Zimmer as “unpanelists.” Lest another frenzied week delay me further, here’s my addition to the #scio10 #reboot corpus.
Journalists-v-bloggers is (almost) dead
Many at the conference, and pretty much everyone in the Reboot session, agreed that the distinction between journalist and blogger would continue to fade — and that “good science journalism” would increasingly be defined as well-informed, well-crafted, transparent writing about science. (Transparent as in clear, yes — but especially as to declaration of possible conflicts of interest.)
Two kinds of stories: “Wow” versus “This smells kinda funny”
In my own 5 minutes (see way below), I drew a distinction between “wow” stories (about cool/new findings, theories, etc) and “something smells funny here” stories (of more investigative or critical nature). The former are often easily and well done by bloggers with good BS detectors; Ed Yong’s many excellent explanations of new or replicated findings are a prime example. This poses obvious competition to writers and pubs who rely heavily on such pieces.
The “Smells Funny” stories, however, may be more threatened by decline of paying venues if writers can’t find supplemental funding to support the extensive reporting these require. I’m split on that prospect. On one hand, the MSM and traditional science press have bankrolled some great examples of this sort of story — the numerous great stories the Times has done on conflicts of interest in pharma/psych research, for instance, as were the stories on the horrid conditions at Walter Reed. My own story on PTSD took many, many weeks of time and thousands of dollars of travel. Yet there are Smells Funny stories the MSM won’t touch and others it botches badly; perhaps new models will do as well or better in funding these.

Yet I do wonder how such Dig the Dirt stories will reach readers if general interest MSM outlets die or quit running such stories altogether. Most people don’t want to hear about funny-smelling stories. If stories like Vioxx and Walter Reed don’t appear in the Times or the WaPo, will they get enough play to have public impact? I worry.
But how will more substantial work get paid for?