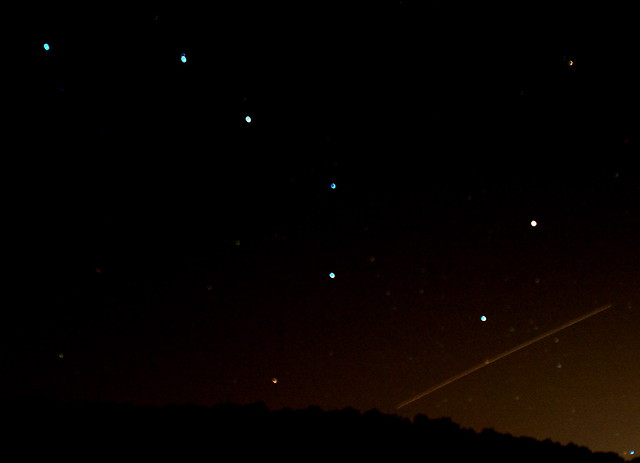 A recent conversation on Twitter between @TimCarmody and @RobinSloan alerted me to this brilliant post from Tim Carmody (who can also be found at Wired’s EpiCenter). It’s a lovely description of how we make sense of things, finding patterns in what’s presented to us, both in science and in everyday life.

The thing is, even the semi-random shapes, the so-called patterns, prior to seeing them as a constellation and then an element of mythology, are accidents. They’re not real.

BUT! That distortion, that accident, produces something extremely powerful — both imaginatively and practically.

Take “constellational thinking” and apply it to something besides stars in space. Let’s say — history.

Over here, you’ve got the Roman Republic, over there, the French Revolution. Distant in time, distant in geography, no kind of causal proximity let alone a relationship between them.

But bam! Slap them together. View them as a single event, a collapse of time.

Now you begin to see the French Revolution the way part of the Revolution saw itself, as an explosion of the continuum of history.

*Actually this ‘post’ is a comment in a thread started by Robin Sloan, Carmody’s blog buddy at SnarkMarket, but the comment became the heart of the post. In most places that’s not supposed to happen, a comment taking over a post. But in this case it reflects, among other things, the wonderful conversational chemistry that often holds at Snarkmarket, where Sloan and Carmody and Matt Thompson have weaving it like the old Celtics for some time now. Who hit that three-ponter? Carmody hit this one. But it was all the passes before, and the games before that, that set it up.

Astronomy, basketball, and the French Revolution. You don’t get that every day.

From Explosions in the sky « Snarkmarket.