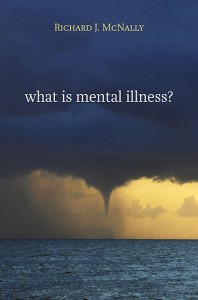 This guest post — a book review of Richard J. McNally’s What is Mental Illness — is by Jason Goldman, a University of Southern California graduate student in developmental psychology who blogs on behavior and psychology at The Thoughtful Animal. Goldman is also the psychology and neuroscience editor at ResearchBlogging.org and edited the science-writing anthology Open Lab 2010.

When most of us think about psychopathology, or abnormal psychology, we think of mental illness. We think of disability. We think of something perhaps maladaptive, at least in the everyday sense of psychosocial functioning, if not in the larger evolutionary sense. We tend to think that something is fundamentally broken. This seems reasonable, but if you dive deeper, the waters get murky.

The first criterion for calling something psychopathological is certainly disability. But what counts as disability? Who gets to decide what’s pathological and what’s just aberrant or eccentric? Where do we draw a line between the sick and the odd? If five symptoms are required to receive a diagnosis and get treatment, what happens to those individuals with only four symptoms?

The second criterion might be distress. Here we run into more problems: whose distress matters? Some psychopathological conditions, such as schizoid personality disorder, do not distress those who “suffer” from it. Individuals with these sorts of disorders “own” their diagnoses and find no motivation to change. Similarly, some compulsive behaviors can cause distress to others but not to the compulsive individual. Other sets of behaviors, of course, such as homosexuality, can cause distress to the self or to others but are certainly not pathological.

The next criterion usually offered is that psychopathologies reflect sets of behaviors that violate social norms. The problem with this should be evident: social norms are culture-dependent. The inclusion and subsequent removal of homosexuality from a list of potential diagnoses is an important example. Another problem is perhaps less obvious: some pathologies, such as anorexia, are actually fairly consistent with social norms.

Finally, psychopathology must be understood with the context of expected and unexpected responses. For example, grief looks a lot like depression, but can at times be a reasonable behavior, such as following the loss of a loved one.

So where does this leave us? The skeptic might argue that a mental illness is anything that doctors are willing to diagnose and treat (and get paid for). A more extreme skeptical view of clinical psychology and psychiatry compares mental healthcare to witch trials; it is simply an attempt by the powerful and elite to control behavior. While this may seem a bit too far-fetched, in Soviet Russia, being a political refusenik was considered a psychopathology.

If it is so complicated, why bother arguing about what is psychopathology in the first place? The answer is fairly straightforward: if we don’t define pathological behavior with science, then it will be defined by social and political forces.

In a book published this spring, Richard J. McNally, a professor of Psychology at Harvard, attempts to answer the question What Is Mental Illness?

He doesn’t waste any time getting to the point. The book begins:

Nearly 50 percent of Americans have been mentally ill at some point in their lives, and more than a quarter have suffered from mental illness in the past twelve months. Madness, it seems, is rampant in America.

These startling conclusions emerged from the National Comorbidity Survey Replication (NCSR), a study involving psychiatric interviews with a sample of more than nine thousand adults. Studies in other countries, for their part, seem to confirm the high level of mental illness in America. Consider two recent psychiatric surveys done in China and Nigeria. Both indicated that about 4-5 percent of the population had a mental disorder during the previous year, compared with 26 percent of people in the United States. Remarkably, Americans seem more vulnerable to breakdown than people in impoverished, often chaotic regions of the globe. Does affluence somehow breed mental disorder?

McNally’s book is essentially an extended critique of the DSM, for which he serves as an advisor. The DSM, often referred to as the “psychiatrist’s bible,” is the Diagnostic and Statistical Manual of Mental Disorders, and lays out a set of diagnoses that psychiatrists and psychologists use to determine mental disorders. Since 1980, when the third revision of the DSM was published (we are now using a version of the fourth revision from 2000; the fifth revision is slated to be published in May 2013), diagnoses in the DSM are based on a disease model. In other words, different diagnoses ought to reflect different disorders. Just as cancer is not the flu, depression should be distinct from anxiety. It also supposes biological causation for mental illness – even if the biological mechanisms underlying a given disorder remain unknown. Around these assumptions, and the ones mentioned above, McNally organizes his book.

Given the results of the NCSR, McNally begins by asking if we are pathologizing everyday life. He explains the main arguments leveled against the DSM by skeptics: for example, that inclusion in the DSM is based on consensus of experts rather than explicit scientific data, or that psychiatry is attempting to “extend its professional hegemony by either claiming authority over problems previously considered nonpsychiatric or pathologizing more and more of everyday life.” For example, the DSM-IV includes diagnostic criteria for things like mathematics disorder, caffeine intoxication, and a circadian-rhythm sleep disorder, jet-lag subtype. Critics also point out that the DSM-III, and all three revisions of DSM-IV, were worldwide bestsellers, resulting in considerable revenue for the American Psychiatric Association. DSM-5 is sure to follow in the footsteps of the third and fourth editions, at least in that respect. McNally then goes on to explain which criticisms have merit, which do not, and how the DSM-5 and future empirical research may begin to address the reasonable ones.

Next, McNally asks if evolutionary psychology can help make sense of mental disorders. He begins the chapter with the oft-used example of anorgasmia, or primary orgasmic dysfunction. The implication of this diagnosis is that something internal is defective. This so-called condition, however, is one of the most treatable conditions in the mental health field: quality sexual education paired with masturbation instruction can produce a “cure” in 92 to 100 percent of cases. Given that, McNally wonders, “did these women even have a disorder in the first place?” While anorgasmia is certainly not a psychopathology and is almost certainly driven by cultural and social factors, McNally describes how Jerome Wakefield’s critique of primary orgasmic dysfunction led to the formulation of his “harmful dysfunction analysis” of mental disorder. Wakefield argued that “a disorder exists when the failure of a person’s internal mechanisms to perform their functions as designed by nature impinges harmfully on the person’s well-being as defined by social values and meanings.” Wakefield’s harmful dysfunction analysis is important because is combines scientific fact with socially constructed values. The scientific facts specify the process that isn’t functioning as it should while the social values specify the harms that result from that dysfunction.

With Wakefield’s harmful dysfunction analysis laid out, McNally goes on to ask if psychopathology could be an adaptation. Contrary to Wakefield, who would argue that pathology represents the dysfunction of an adaptation, this model suggests that the pathology is itself an adaptation. The general argument goes like this. It is possible that some of the genes associated with a given mental disorder could have had neutral or positive effects on adaptive fitness earlier in human evolutionary history. McNally uses depression as a case study for the adaptation hypothesis. For example, could postpartum depression have once been an adaptive response?

How might this work? McNally explains it like this: investing resources in a new baby makes evolutionary sense only if it increases the parents’ own inclusive fitness. In other words, if a child is unlikely – for whatever reason – to survive to reproductive age, then all the time, effort, and resources spent by a parent on nurturing an infant may actually detract from their own inclusive fitness by draining resources away from their own health as well as that of their other children. McNally, citing anthropologist Edward Hagen, writes that certain empirical facts about postpartum depression are consistent with predictions derived from this hypothesis. For example, factors associated with reduced viability of the newborn such as low birth weight and prematurity predict postpartum depression, as do factors associated with reduced paternal investment, such as marital conflict. Hagen extends the argument, hypothesizing that depression in new mothers might function as a signal to spouses and other kin. Those individuals might be motivated to step in and help out with childcare, so that their own inclusive fitness is not impaired.

One thing that I particularly appreciated about this book is that McNally doesn’t take any sides when describing these and other hypotheses about the origins of mental illness, allowing the reader to draw his or her own conclusions. Those conclusions will probably be mixed and inconsistent, and that’s okay. You get the real sense that he is truly committed to the alleviation of mental suffering.

It has become fashionable to trash psychiatry and to bash its “bible,” the DSM. I am not a DSM-basher. I am a clinical psychologist and experimental psychopathologist who served on the PTSD and specific phobia committees of the DSM-IV. I currently serve as external advisor to the groups responsible for revisiting and revising the diagnostic criteria for panic disorder and for PTSD. I am often critical of trends in psychiatry, but I’m a friendly critic, one who’s keen to make constructive arguments about the direction of the field and how we understand and treat mental disorders.

He makes it clear that while approaches from neuroscience, genetics, and evolutionary psychology can serve as fruitful and informative empirical approaches to understanding the biological substrates of psychopathology, no scientific approach can clearly distinguish psychiatric disorders from everyday distress. ”Science,” he concludes “can tell us what has gone wrong with a person and which treatments will work best to fix it. But it cannot tell us whether we ought to treat a certain condition.” Indeed, we will all continue to struggle with these questions in the ongoing quest to alleviate human suffering.

In the meantime, perhaps a good thorough reading of “What Is Mental Illness?” can put things into perspective, in the months leading up to the publication of the DSM-5. It’s a clear, thorough, and lively accounting of the problems facing mental health and its practitioners today, and will prove a fascinating read to scientist and layperson alike.

Jason Goldman, a graduate student in developmental psychology at the University of Southern California, writes on behavior and psychology at The Thoughtful Animal. He is also the psychology and neuroscience editor at ResearchBlogging.org and was editor of Open Lab 2010, a collection of the best online science writing, which you can buy here.

This is the second guest post at Neuron Culture. In an earlier guest post, Eric Michael Johnson considered The Allure of Gay Cavemen.

What is Mental Illness, by Richard J. McNally (reviewed above)

Inside the Battle to Define Mental Illness | Magazine

The PTSD Trap (aka Soldier’s Stress), my 2009 Scientific American feature, which features McNally