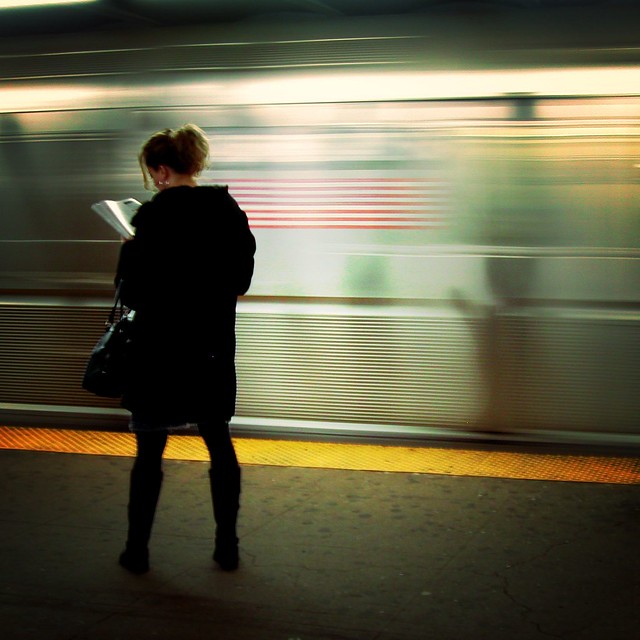 Over at Forbes, Lewis DVorkin, who once ran big bits of AOL, has written a fine smart post on the boom in longform stories on the web. The longform surge, both at magazine and newspaper sites and in new venues such as The Atavist, may seem surprising, but as DVorkin tells it, it’s surprising mainly in that it surprised editors, publishers, and pundits who misunderestimated what readers actually enjoy. The current move to longform is thus a correction of a mistake made from mispercption. And DVorkin, who now mashes reader-usage numbers for Forbes, says the correction is happening partly because the web makes it possible to more accurately and quickly see what readers actually read.

Reliable user data just didn’t exist in the medium’s early days. Now, the numbers illuminate everything all the time for journalists-turned-product-people like myself. You can track the digital news consumer’s first click, second and each one after that. You know how far down the screen they scroll. And most important, you learn what they think as the social conversation evolves. When we look at what’s produced, commented on and shared on Forbes.com and digest all the data, what lies behind news usage today becomes clear. Speed, perspective and analysis are certainly important — but in-depth reporting that often starts its life in longer FORBES magazine stories is fast becoming one of the news enthusiast’s most rewarding clicks.

DVorkin offers example after example of long stories topping the charts at Forbes. You’ll see the same thing if you look at the New York Times’ most-read and most-emailed lists: long, well-reported, well-written stories are consistently over-represented among the most popular stories. For several years, editors and publishers insisted that people wanted shorter stories, especially on the web, and some are still preaching and practicing that. But they were wrong. They operated on what they considered informed wisdom. The data is showing the wisdom to be bunk.

But wait — maybe readers are just reading the beginning of these long stories and then bailing? DVorkin says No: metrics on scrolling, time-on-page, clicks on “Next Page” links, and other page-use data shows people are reading to the end.

All of this is being accelerated or made easier by new tools and devices. Social media lets readers rather than editors and designers decide what’s important. Software tools such as Instapaper and Read It Later  make it simple to save long stories and read them later. And tablets and smart phones make it possible and even inviting to read those saved stories while in bed, commuting, at lunch, or walking in hazardous readerly immersion across the street. The chart below, for instance, taken from DVorkin’s story, shows reading habits of ReadItLater users for iPad versus non-pad computers. It shows that iPad users tend to read heavily at lunch, with smaller surges in the evening and the wee hours, while all nonpad readers seem to read midday and in the evening. Separate data not shown on that graph, says DVorkin, shows that iPhone users read most heavily “at 6am, 9am, 5pm to 6pm and 8pm-10pm (“the moments between tasks and locations”).” 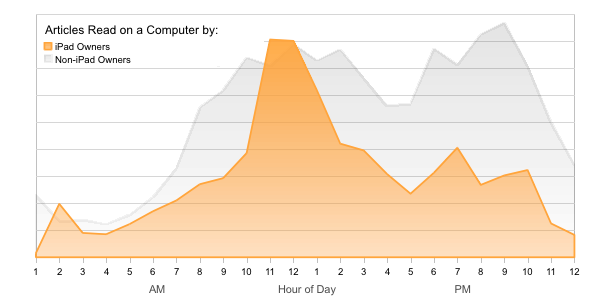 I suspect that it will be come increasingly apparent that the shrinkage of feature stories, such as that currently underway at the New York Times Magazine (where I sometimes write, and where 8,000-word features used to be common, but are now rare), is driven less by true reader preference than by shrinking print-ad space, which discourages fatter magazines;  budget worries, since longer stories tend to cost more, both in per-word writer fees and reporting expenses; and, in too many cases, sad misjudgments about readers’ tastes and appetites. As one commenter at Dvorkin’s post put it, “Long-form was once deemed an overload for web readers, but now the data is debunking that notion. The market never went away and publishers almost made it a self-fulfilling prophecy.”

The budget part will remain a work-in-progress. The long stories that do well tend to be the costly, heavily reported sort, and that money must come from somewhere. But the idea that publications should run fewer long stories because readers prefer short ones is poppycock. Readers like both kinds, and seem to especially value the longer ones — and the long ones, I’d bet (and do), are the stories that breed reader loyalty.

PS, which I pulled up from the comments, where I wrote it in response to Peter Edmonds:

I’d love to know better which publications pay and respond heavily to smart reader-use-data. As far as I can tell, some of the publications that are doing best in the current digital upheaval, such as The Atlantic (where I also sometimes write) and Forbes, are paying close attention and adjusting both online and print content accordingly — and in ways that enrich and deepen content even as they make it livelier. The Atlantic’s AtlanticTech channel, for instance, did something wholly original. When the team at The Atlantic decided to establish a new tech section, they made a point of hiring someone to run it — Alexis Madrigal, formerly of Wired Science — who came with a vision not of drawing hits the easy way, with short or even long gushy reviews of toys, geegaws, and other tech wonders, but by running posts of various lengths, including quite long ones, that look from many directions and perspectives at how technology shapes our lives, history, and thinking — and vice-versa. That channel, hugely successful, became a model for other successful channels at The Atlantic and helped make that venerable magazine profitable. Writing long wasn’t the only thing that made that transition successful. But embracing long pieces as one way of capturing readers’ supposedly fickle attention is a key element of the Tech channel and remains a firm commitment and prime distinction of the print magazine.

Also added a bit later: On the Twitter, David Biello, of Scientific American, happened to mention this very apt interview with Chris Keyes, the editor of Outside. Especially up front he talks about the value of long articles to Outside, and how they help unify the online and print brands and readerships. My favorite quote: “If you’re not excited right now, you should leave the business.”

See Inside Forbes: How Long-Form Journalism Is Finding Its Digital Audience

Image: by Moriza, some rights reserved.