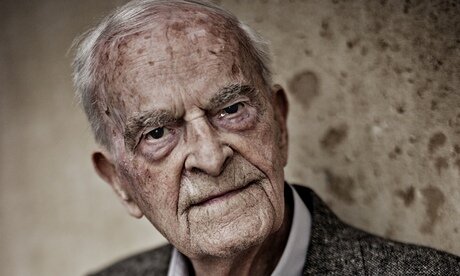 Harry Leslie Smith. Photo by Sarah Lee, for the Guardian

Harry Leslie Smith, who lost a sister to a world without public health care and then saw the National Health Service arise in the wake of World War II, laments the decimation of one of the finest products of Britain’s finest hour:

My sister’s body was committed to a pauper’s pit and interred in an unmarked grave along with a dozen other forgotten victims of penury. My parents didn’t even have a picture to remember their daughter’s life. To the outside world, it was as if she was never there, but for our family her life and her end profoundly affected us. My father never mentioned Marion’s name again. It wasn’t out of callousness or disrespect, but because her death festered in his soul like a wound that never healed. For the rest of his life my dad carried with him an unwarranted guilt that he was responsible for Marion’s tuberculosis, and it cut him deep. As for my mother, she often talked about Marion. As my family stumbled from misery to calamity, through the pitch dark of the Great Depression, my mother invoked my dead sister’s name as a warning that the workhouse awaited each of us, unless the world and our circumstances changed.

It would be almost 20 years before, in 1948, the NHS was formed, and for the first time in my civilian life I went to a doctor’s surgery and was treated for bronchitis with antibiotics that assured me a speedy and safe recovery. The cost to me was nothing, and I was grateful because I was skint, having just started back in the civilian working world.

via A eulogy to the NHS: What happened to the world my generation built? | Society | The Guardian.