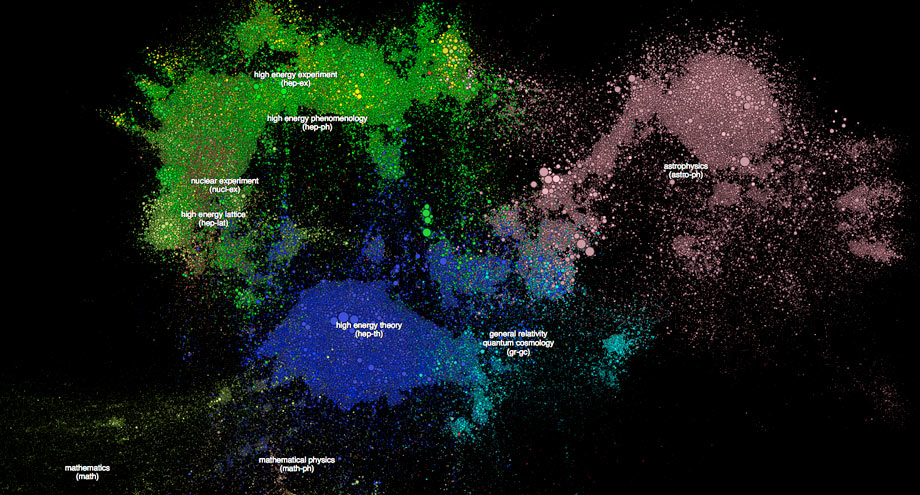 Don’t miss David Quammen’s gorgeous, moving review of George Johnson’s beautiful masterwork, Cancer Chronicles. I read some great stuff this week, but nothing that moved me more than this.

This Insect Has Gears In Its Legs by Ed Yong

Obviously. WAIT – whu? Some female squid can paint fake testes on themselves

“You touch the fecal bacteria of strangers ALL THE TIME.” Yes, you do. So does @verogreenwood, who’s big enough to admit it. Get the full scoop here.

How Chris McCandless Died.  John Krakauer on new evidence supporting his 20-year-old hypothesis of what killed the young (un?)hero of Krakauer’s bestseller Into the Wild.

Are your 9/11 memories really your own?  Quite possibly not.

‘Boys Have Deep Emotional Lives’  When we let them.

Looking Beyond the ‘Neuro’ Revolution in Psychological Science  Liz Phelps of NYU, a leader in neuropsych, weighs in.

Paperscape maps the dazzling universe of scientific research. The source of the lovely graphic at top of this post.

Grass-roots push to expand use of rapid-acting antidepressant.  Paul Raeburn on the push to make ketamine more widely available to fight depression.

This is a complete list of Wall Street CEOs prosecuted for their role in the financial crisis. It’s short.

One of the most chilling reads I’ve ever heard: F. Scott Fitzgerald reads John Keats’s “Ode to a Nightingale.” H/t to David Grann

Why a recent journalism school graduate spent her money on a drone  To do good work.

The fabricator who tarnished the reputation of This American Life apparently pays no price for his crime….