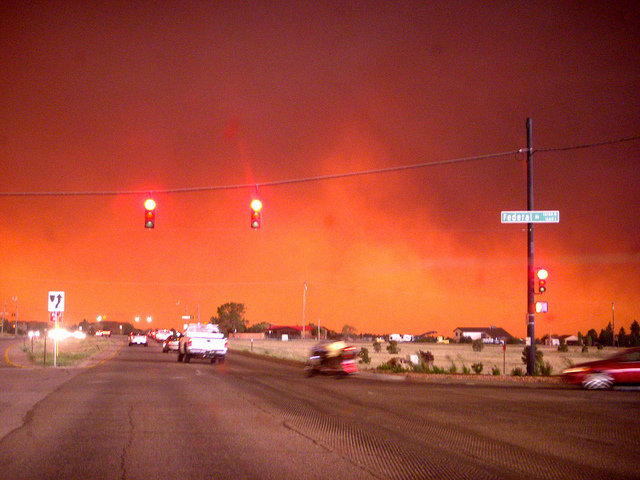 The Colorado Springs wildfire blows up.

If the pictures of those towering wildfires in Colorado haven’t convinced you, or the size of your AC bill this summer, here are some hard numbers about climate change: June broke or tied 3,215 high-temperature records across the United States. That followed the warmest May on record for the Northern Hemisphere – the 327th consecutive month in which the temperature of the entire globe exceeded the 20th-century average, the odds of which occurring by simple chance were 3.7 x 10-99, a number considerably larger than the number of stars in the universe.

Meteorologists reported that this spring was the warmest ever recorded for our nation – in fact, it crushed the old record by so much that it represented the “largest temperature departure from average of any season on record.” The same week, Saudi authorities reported that it had rained in Mecca despite a temperature of 109 degrees, the hottest downpour in the planet’s history.

Not that our leaders seemed to notice. Last month the world’s nations, meeting in Rio for the 20th-anniversary reprise of a massive 1992 environmental summit, accomplished nothing. Unlike George H.W. Bush, who flew in for the first conclave, Barack Obama didn’t even attend. It was “a ghost of the glad, confident meeting 20 years ago,” the British journalist George Monbiot wrote; no one paid it much attention, footsteps echoing through the halls “once thronged by multitudes.” Since I wrote one of the first books for a general audience about global warming way back in 1989, and since I’ve spent the intervening decades working ineffectively to slow that warming, I can say with some confidence that we’re losing the fight, badly and quickly – losing it because, most of all, we remain in denial about the peril that human civilization is in.

Get the rest at Rolling Stone.

Photo by daisyelaine, by permission.