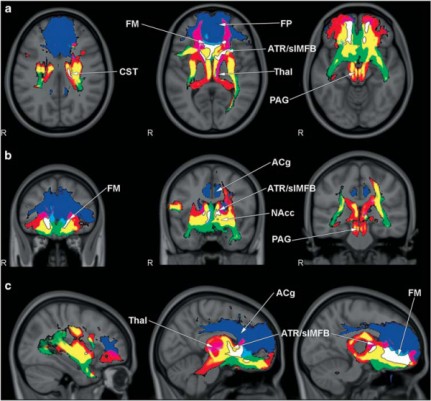 The ever-excellent Neurocritic has an interesting post looking at “lesion studies” of depression. As he notes, he was hoping for real lesions, from people who’d had actual psychosurgery, but had to settle for a simulation study that used MRIs. The study, (Schoene-Bake et al., 2010) looked at the different brain areas affected by four different areas targeted in psychosurgeries meant to treat depression. According to the study, these four approaches overlapped in spots. And as the study put it, the

convergence of these shared connectivities may derive from the superolateral branch of the medial forebrain bundle (MFB), a structure that connects these frontal areas to the origin of the mesolimbic dopaminergic ‘reward’ system in the midbrain ventral tegmental area [VTA]. Thus, all four surgical anti-depressant approaches may be promoting positive affect by converging influences onto the MFB.

As Neurocritic notes, this finding overlaps heavily with experimental work in which Emory neurologist Helen Mayberg is targeting one particular connection along the MFB — an area called Area 25. Since I wrote on Mayberg’s study at length in the Times Magazine a few years ago, and then more briefly in a followup at Scientific American, I find this quite intriguing: Mayberg’s rigorous approach, in which two decades of work converged on Area 25, led her to an area that had been part of broader, less specific targets in earlier, cruder efforts, but which seems to be a more successful target. As I wrote in the Times Magazine article:

Mayberg … increasingly homed in on Area 25, which seemed crucial in both its behavior and its position in this network [implicated in depression]. [She] found that Area 25 was smaller in most depressed patients; that it lighted up in every form of depression and also in nondepressed people who intentionally pondered sad things; that it dimmed when depression was successfully treated; and that it was heavily wired to brain areas modulating fear, learning, memory, sleep, libido, motivation, reward and other functions that went fritzy in the depressed. It seemed to be a sort of junction box, in short, whose malfunction might be “necessary and sufficient,” as Mayberg put it, to turn the world dim. Maybe it could provide a switch that would brighten the dark.

So she got a neurosurgeon to slide some tiny brain-stimulating electrodes into Area 25, turned them on at a steady 4 volts, and found that this gentle stimulation of Area 25 actually calmed that hyperactive region — and relieved extreme, intractable depression in roughly 2 of every 3 patients. This is a high high efficacy for depression, and the relief was sometimes immediate. (For the whole story, see the article.) 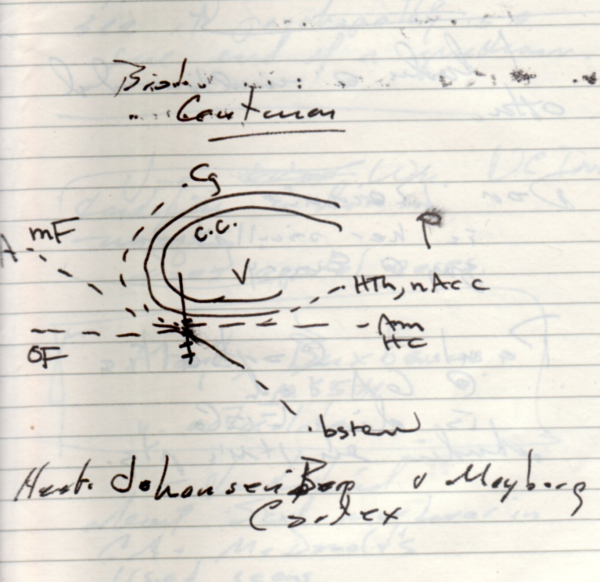 As I note in my comment at Neurocritic’s post, Mayberg and others are now working larger, double-blind placebo studies to test the treatment further.

In the comments at the Neurocritic post, Neuroskeptic (another ace neuroblogger, presumably slightly less critical than Neurocritic) wonders if Area 25 might be implicated in other mood disorders. If I remember correctly, Mayberg’s long analysis did not find so — and other efforts to treat OCD, depression, and other mood disorders by sending deep-brain stimulators elsewhere have not fared as well. (Though Mayberg is getting promising results in some early trials targeting Area 25 for bipolar disorder.) Perhaps more historical lesion studies like that done by Schoene-Bake and colleagues, and explored in Neurocritic’s cool post, might suggest additional targets. Then again, it might be that other disorders don’t have a single node as approachable and effective as Area 25 appears to be.