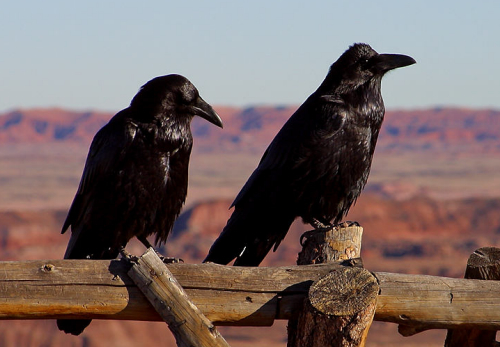 Ravens show that consoling one another is also for the birds, Yet another finding that other species have qualities previously thought uniquely human. Our greatest distinction is that we’re highly social. Yet in that we’ve got a lot of company.  ﻿

Human brains excel at detecting cheaters. FMRI’s, not so much, says Vaughan Bell at Mind Hacks– though in yet another court case, the fMRI lie detection industry pushes another story.

Bell also has a nice write-up of of scintillating RadioLab program on how early dementia shows up in use of language. A stellar program, and short. You’d be demented not to listen to it.

At n+1, Kent Russell offers Eight Playoff Truisms. He’s talking hockey, but most of it would go for basketball. I care zero for hockey but found this a fun read.

Backreaction: The Future of the Conference wonders whether we’ll quit all this traveling and just conference in cyberspace. I don’t see it. No substitute for meatspace, which we manage and mine far more skillfully than anyone does the web. Don’t get me wrong, I love the web. But it can’t replace meatspace any more than meatscape can it.

You can now order Here Is a Human Being: At the Dawn of Personal Genomics, by Misha Angrist, a writer who talked his way into being one of the first ten people to have his entire genome sequenced. Haven’t read it myself yet, but after meeting Misha and hearing him talk — and spar with Jim Watson (Angrist is not just a cheerleader for all things genomic) — I believe this will be a good read.