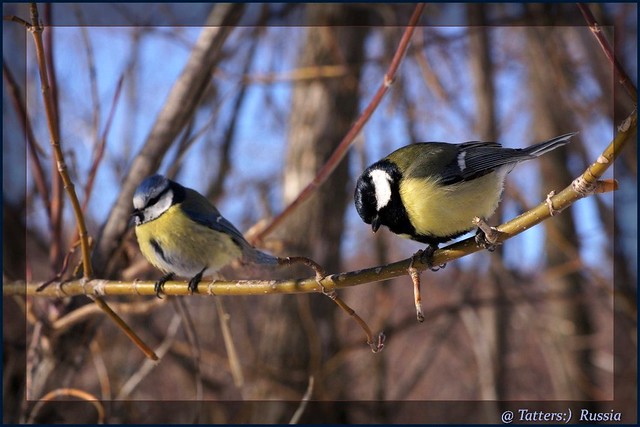 An especially nice pair. Image by @Tatters, some rights reserved.

ScienceOnline, more than most conferences, seems to add immense energy and new perspectives to discussions long percolated. Often this rises in an unexpected way, and often from the blog posts re-examining the conference and its sessions. Behold: In the past couple days, two blog posts have energized the often dead-tired but ever-relevant issue of sexism in the science and writing worlds. Yesterday I crossposted a post by Kate Clancy, of Context and Variation, that examined with particular nuance the internal battles and obstacles that many women feel in presenting their work to the public. Today brings a much different but equally special post, “I’ve never been very good at hiding,” in which Christie Wilcox, of Observations of a Nerd, declares war on titty talk.

A few weeks ago, I received a facebook message. It was from a male admirer of my blog (and his fiancée, coincidentally). In it, he said “You are GORGEOUS, and your tits look absolutely incredible.” I froze. I know it was meant as a compliment, but it made me really uncomfortable. It was a sentiment that was much more muted in other comments I’d gotten. You know, ones like “wow, you’re an amazing writer AND you’re hot?” or “who would have thought a pretty girl could be so good at science?”

Of course, if you point out to any of these people that their comments are sexist, they instantly defend themselves and say that’s not what they meant. They weren’t trying to imply women should be less good at science or writing, they just wanted to say that it’s cool that I’m pretty and nerdy. They think women in science are great.

But what they fail to realize is the fact that my looks are important enough to comment on is what makes their comments sexist.

Then, after some explaining, some pondering, and a reminder that the science blogosphere has some work to do, this smart, tough young woman makes up her mind, right there before us, stands up and draws her sword:

I don’t have the same risk-aversion that other female scientists or science writers might because I haven’t been beaten down or held back. Nor am I timid. Trust me, no one has ever accused me of being too quiet. Call me ambitious, driven, or even a bitch – those words are all compliments in my book – but be certain that I will not allow my gender to prevent me from achieving success.

Clearly, we need to make a change in the science blogging community. I won’t stand up and say I have all the answers. I don’t know how to better encourage other female science bloggers other than to say I’ve got your back. I can’t assuage the fears of those who think if they put their name and face on a blog, they’ll lose credibility or get attacked, other than to lead by example. But maybe I don’t have to do more than that. Perhaps all it will take to tip the scales is a woman who is willing to say “bring it” and is still standing a year later.

Well, then. Bring it.

I find this both wonderful and horrible. I’ve met Wilcox a couple times, and I don’t know her well, but she is ever so pleasant, and my impression is that while she now stands tall before us having drawn her sword, that’s not her favorite stance or persona. Rather she has taken up sword because she sees a battle that must be fought and won. It’s a shame she must do so. She has less frustrating work that she loves. Yet clearly she must take up this battle, and I admire her for taking it up so boldly. She brings to mind my favorite novelistic hero, Lucky Jack Aubrey; when Lucky Jack decides to engage, he engages. My late mother had to do likewise. So do my sisters. So, it appears, must my daughter. Thus horror and wonder: Horror this thing must still be fought; wonder that Wilcox so energetically the battle.

Whose battle is it? Everyone’s I’d say. Wilcox’s post has already inspired a rich conversation in the comments, one taking alongside and entwined in many ways with the comments-conversation in Clancy’s post. About halfway down, my dear friend Steve Silberman lodged a quick comment but kept it brief, he said, because he didn’t want it to become too much a male conversation. I know what he means. Yet as I said in my own hurried (but long; I didn’t have time to write shorter) comments there, I think we men should engage here, if for nothing else than to tell their fellow men, when they are being titty idiots (titjiots? something), to STFU. Even if we don’t elaborate on STFU — maybe especially if we don’t elaborate on STFU — it might inspire some self-reflection. Or at least get them to STFU.

So for those men who don’t already understand, I offer this brief STFU guide:

What are you thinking? Hear this: Telling anyone but your sweetheart that you like her breasts is like giving a stranger a squeeze. You may be drooling inside, it happens, but for God’s sake, man, YOU DO NOT HAVE A SEXUAL RELATIONSHIP WITH THIS PERSON. That’s your fantasy. Keep it in your pants. It was nothing to do with public life and conversation

Part of this comes down to manners. As my mom said, Some things you just don’t talk about it in public. So men: However short is your personal list of Things You Don’t Talk About in Public, Add to it a woman’s physical appearance. If you truly just can’t resist some reference to anatomy, tell her what Cornell West told my English prof sister — tall, good-looking redhead vying for a job  — after her presentation at Harvard: “Sister, you kicked some ass.” Trust me, that goes over much better than “Nice tits!”

I know that to some women this may seem slightly patronizing (though I hope not), but: Men, if this is what it takes to give a crap, think about how you’d feel if someone said something similar to your mom or your sister. I PRAY that thought disturbs you.

I care about this because it’s disgusting and idiotic and demeans both public conversation and over half of humanity. I care about it more immediately because my late mom — an absolute kickass doctor who went through med school in Texas in the 1950s as a highly attractive single mother, a stunner and a hotshit, way-smarter-and-tougher-than-you, cowboy, who took no guff from anyone — had to deal with this crap nearly all her professional career. Well into her fifties. She bore it well, for she was tough as hell. She was so hard you could rollerskate on her. But she didn’t enjoy it, and there’s no reason she should have had to deal with it.

My kickass sisters the lawyer and the English prof have to deal with it too. One, while in college, was straightout offered an A — an A she was already EARNING, thank you — in return for sex. I wanted to drive down, from New York to Texas, and pound the guy’s face against his desk. There! You want some Dobbs on your desk! Here it is! My sister said, No, that’s okay. I’ve got it covered. She did. God save that guy if he encounters her now, when the table is level. Yet despite two generations of tough battlers before her, clearly my daughter, now 6, will have to deal with this crap as well. This anger me.

Men: A woman at work — blogging, doing science, lecturing, whatnot; they’re in the working world, for god’s sake — SHOULD feel an insult when they get titty compliments. You should learn this, and realize that no matter what your intentions, this will be the effect of your inappropriate “compliments.” Why? Because a statement about their anatomy or sexual appearance gives notice that this woman, presently operating in a realm of work and public discourse, must please and impress not just with her work or intellectual contributions, but with an available sexuality, free for inspection, comment, and all but direct physical fondling by the observers. WTF is that? As to the “Well, it could happen to men, too, so it’s really equal”:  That it happens to men only with extreme rarity should tell us something: It happens rarely to men, and frequently to women, because some men feel they gain an advantage by introducing sexuality into the conversation. So cowboy up. Be man enough to fight fair. Leave the tits out of it. If you must mutter about them, talk aloud to yourself later, when you’re all manly and alone.

I harbor no doubt that Christie’s BRING IT attitude can deliver what we might call an educational effect. I was once walking down a Brooklyn street with two friends, a man and a woman, soon after we graduated college — Oberlin, where harassing and sexist language and leering was (rightly) looked at harshly and not often heard — when one of a trio of large, tough-looking construction workers, who were sitting alongside the sidewalk having lunch, gave a wolf whistle in response to the sight of my friend Jane. (Such charm.) I felt shocked, bothered, disgusted, and flummoxed as to what to do. Should I be chivalrous and said STFU (and maybe get thumped)

I didn’t have to decide. Jane took matters into her own hands. She stopped and turned and faced these three big men dead on and said, “Thanks! Thanks for fucking NOTHING!” Doug and I stood slack-jawed, amazed. The construction workers sat dumbstruck. They stayed dumbstruck as Jane stared them down for several seconds. They said nothing as she turned and we walked off

I like to think their behavior and possibly even their thinking was changed afterwards. I know my own thinking about such comments were.

Finally: Men, if the above seems complicated, use this simple rule: If you’ve a vague feeling that what you’re getting ready to say might be inappropriate, pay heed. Say something safer, or just STFU. If that rule is too complicated, just STFU.

So readers, that’s my two cents. For the heavy  coins, head to NotSoNerdyChristie’s blog, read her post, and engage. Mind your manners.

And to Christie Wilcox: Sister, you kicked some ass.