Zebra finches tweaking each others’ genes., Zebra finches, like other social species, respond to social interaction with amazingly fast changes in gene expression in the brain and elsewhere. It appears we humans do as well. Photo by Jon Bendon; some rights reserved

I’ve a new feature, “The Social Life of Genes,” in Pacific Standard. It involves bees, birds, monkeys, and how our social life and our genes constantly converse, reshaping us (and our social life) as they go.

One of the main characters is a young UCLA psychoneuroimmunologist named Steve Cole, who in the 1990s, reviewing the  health records and interviews of 80 gay men who’d had HIV for 9 years, confronted a mortal puzzle: the closeted men among these 80 were getting sick and dying faster than were the openly gay. Being discrete about one’s sexuality would seem to be a strictly social issue — a decision about privacy and politics presumed to lack medical implications. Yet in a sense it could kill you.

Cole, perusing other records, then found that closeting aside, HIV-positive men who simply felt lonely also got sicker faster. He showed that even among gay men who didn’t have HIV, the closeted got and fell to various diseases, including cancer, at higher rates than did the out. Meanwhile, psychologists at Carnegie Mellon finished a well-controlled study showing that people with richer social ties got fewer common colds. Something about feeling stressed or alone, it seemed, was gumming up the immune system—sometimes fatally.

“Now what is that?” Cole said to me not long ago. “You’re besieged by a virus that’s going to kill you, but the fact that you’re socially stressed and isolated seems to shut down your viral defenses. What’s going on there?”

“A cell,” as Cole put it to me, “is a machine for translating experience into biology.” And down at the level of the DNA in their nuclei, our cells appear to pay particularly keen attention to our social lives. 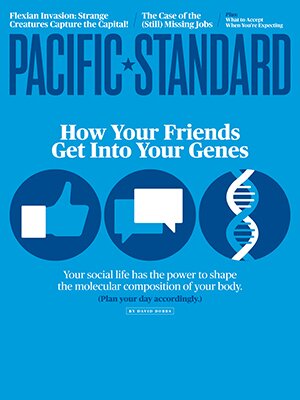 In “The Social Life of Genes,” the cover story in the September/October 2013 Pacific Standard, published today online, I look at this line of work and what it suggests about us, about evolution, about the nature and meaning of gene expression, and about the primacy of social experience. I hope you enjoy the story. It has not just the juicy stuff above but killer bees, finches fliring and fighting, and a wee dull fish smaller than your hand who can be convinced in very short order that he’s a total stud.