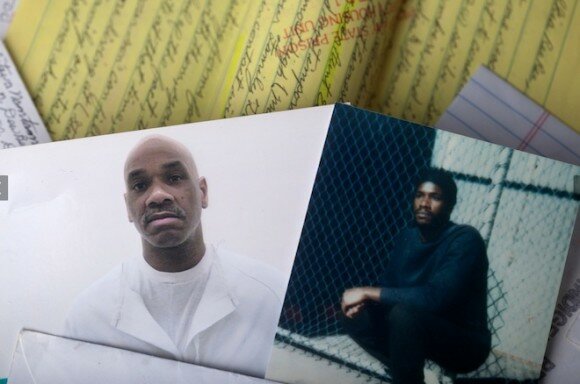 At left, a photograph of Ronnie Dewberry, a prisoner in solitary confinement at California’s Pelican Bay State Prison. The photo was received by his sister Marie Levin in 2012, after a rule change allowed prisoners in solitary to be photographed for the first time in more than 20 years. At right is Dewberry’s next-most-recent photo, taken in 1988. Image: Adithya Sambamurthy/The Center for Investigative Reporting

Humans are deeply social organisms; they need company almost as badly as they need food and water.

I confess I thought this was obvious enough that, though I knew the U.S. puts some people in solitary confinement, I figured it was at most a few hundred. It’s 80,000. Brandon Keim brings the story:

In the largest prison protest in California’s history, nearly 30,000 inmates have gone on hunger strike. Their main grievance: the state’s use of solitary confinement, in which prisoners are held for years or decades with almost no social contact and the barest of sensory stimuli.

The human brain is ill-adapted to such conditions, and activists and some psychologists equate it to torture. Solitary confinement isn’t merely uncomfortable, they say, but such an anathema to human needs that it often drives prisoners mad.

In isolation, people become anxious and angry, prone to hallucinations and wild mood swings, and unable to control their impulses. The problems are even worse in people predisposed to mental illness, and can wreak long-lasting changes in prisoners’ minds.

“What we’ve found is that a series of symptoms occur almost universally. They are so common that it’s something of a syndrome,” said psychiatrist Terry Kupers of the Wright Institute, a prominent critic of solitary confinement. “I’m afraid we’re talking about permanent damage.”

California holds some 4,500 inmates in solitary confinement, making it emblematic of the United States as a whole: More than 80,000 U.S. prisoners are housed this way, more than in any other democratic nation.

The effects are a horror no one decent society should condone, but we have more people in solitary than ever. Neuroscientists are trying to document the effects well enough to roll back this practice, as we have before. Keim tells the rest of the story at Wired.