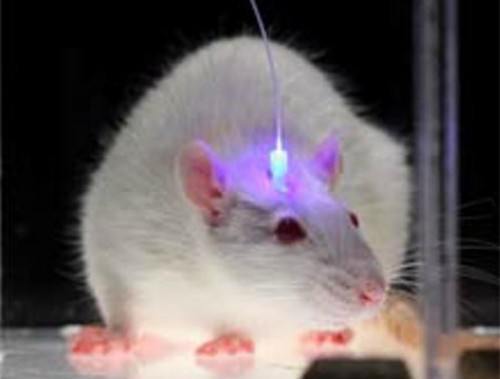 Two or three years ago, Emory neurologist Helen Mayberg, whose experiments using deep-brain stimulation for depression I check in on now and then, told me that Karl Deisseroth’s work using light to fiddle with brain circuits had huge potential both as a replacement for DBS and for much else. As Lizzie Buchen ably reports in Nature, that potential is now being realized.

This is a very slick tool that seems almost too far out to actually work. It lets you use light to turn brain circuits on and off at will, and with great precision. It’s not simple to construct. But once constructed, it works simply. And because it can isolate tightly defined circuits and turn them on and off, it has huge potential both as a research tool (Hm; what does this circuit do?) and as what amounts to a reversible ablation tool. DBS is reversible — a huge asset if things go awry, and a great way to test for placebo effect — but you can’t target it as precisely as you can optogenetics and it inflicts a greater intrusion into skull and brain.﻿

Using a hybrid of genetics, virology and optics, the techniques involved enable researchers to instantaneously activate or silence specific groups of neurons within circuits with a precision that electrophysiology and other standard methods do not allow. Systems neuroscientists have longed for such an advance, which allows them their first real opportunity to pick apart the labyrinthine jumble of cell types in a circuit and test what each one does. “It has revolutionized my approach to science,” says Antonello Bonci, a neurophysiologist at the UCSF Ernest Gallo Clinic and Research Center in Emeryville who began using the technique in 2007. “It can clarify unequivocally the role of specific classes of cells, and solve controversies that have been going on for many, many years.” Among the clarifications sought is the precise function of ‘place’ cells, hippocampal neurons that fire only when an animal finds itself in a specific location; another is the function of complex activity patterns observed when an animal is paying attention or executing a movement.﻿

“God’s gift to neurophysiologists,” MIT’s Robert Desimone calls it. You can get the rest at Nature, where they’ve recently made all news items, and news features like this one, open access.