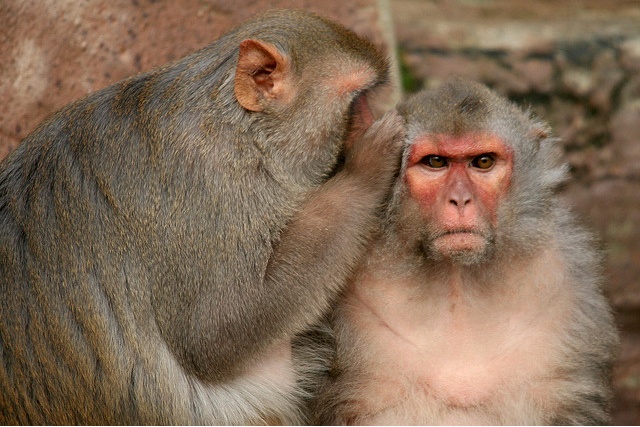 Lots of news has broken lately about Marc Hauser, the Harvard psychology professor famous first for studies of morality and cognition in nonhuman primates, and then, starting last summer, for being found guilty of scientific misconduct by Harvard. No one seems quite sure what to make of all these subtle movements and shifts, and whether they amount to a settlement or pre-event tremors. Here’s my read.

First, let’s recall that “scientific misconduct” in this case does not mean sloppy work; it means, by the NIH definitions Harvard uses in such investigations, either plagiarism (not on the table here) or the manipulation or fabrication of data. Extremely serious charges. I covered this heavily last year here at Neuron Culture and in a wrap-up at Slate.

Given the seriousness of those findings from Harvard, many wondered if Hauser would be fired. Harvard has kept its cards close, however, probably for a mix of legal and strategic reasons, and probably too because a federal investigation is apparently underway, as sometimes happens if a researcher is accused of particularly egregious misconduct in research using federal funds. As a result, the Hauser news feed stayed quiet for a while. But it livened up over the last two weeks. We’ve heard that

So what to make of all this? I’ve done a bit of fresh reporting in the wake of these late developments, but not anything comprehensive, and — as has often been the case throughout this affair — no one wanted to go on the record. But with those caveats, here’s my take.

First, the replication. The data that Science published last week replicates part of a 2007 study that Hauser’s team did with wild rhesus macaques on an island in Puerto Rico. A researcher would show a monkey some food; slip the food behind a visual block and into one of two hidden containers; then expose the containers, move them apart, and make one of two hand gestures toward one of the containers. The idea was to see whether the gesture would lead the monkey to look at the touched container first. (You can see videos of the replication here.) The monkeys’ responses, the original study argued,  suggested that they understood “goal-directed action” — an ability that some feel argues for ttheory of mind. The data from the replication closely matched that from the original study.

The Boston Globe, continuing Carolyn Johnson’s strong coverage of the whole affair, reported this well, emphasizing that the replication removed one nagging question about this one paper but left many other issues outstanding. The Times’s report went much further, with extensive quotes painting this replication as a signficant win for Hauser.

One thing that went unreported in any of the several reports I read (perhaps properly, since it’s hard to know what to make of it; yet it is odd, and one does indeed wonder what to make of it) is that the researchers did this replication not after the scandal broke, but way back in January 2008 (as stated in the data replication). This was before any investigation was made public, and possibly but not necessarily before Hauser knew he was under investigation. (When the news broke last summer, the investigation was reported to have been three years in the making — but unless I missed something, we’ve not been told exactly when Hauser learned of it. If you know otherwise, .) So the replication might have been done simply because someone in the lab noticed the raw data was missing and decided it should be replaced or replications. Or possibly the investigation sharpened attentions and inspired the replication.

In any case, soon after the study was published in September 2007, someone in the lab found or was told that the raw data for the rhesus trails were missing, and someone (presumably Hauser or former lab member Justin Wood, now at University of Southern California, the other author on the replication) decided, rightly, to repeat the experiment. They did so in early 2008. It appears they did not at that point submit it to Science or tell Science about the missing data. Soon after the scandal broke last summer, however, Wood did tell Science about the missing data. Over the months that followed, Wood and Hauser prepared the data and submitted it, along with the videos of the experiment being done, to Science. Science says it vetted the data heavily.

I’m frankly not quite sure what to make of this — except that, as intriguing as some of these details are, I think it’s easy to make too much of what the replication means for Hauser’s overall guilt, innocence, or fate. It fills a blank but raises other questions. For example, one researcher I heard from (not associated with the Hauser lab) , who communicated only on condition of anonymity, expressed dismay at what Wood’s 2010 letter to Science revealed about the research and data collection:

“Professor Hauser [Wood wrote] states that ‘most of the rhesus monkey observations were written by [lab member] Glynn on a piece of paper and then the daily resulted tallied and reported to Wood over e-mail or by phone,’ and then the raw data were discarded.”

The researcher I corresponded with opined that “this was about as unacceptable a method as there could be.”  Regardless of that, a lab’s replication of its own work certainly has value — but it’s a fraction of the value that would be brought by replication rigorously done by another lab.

So overall, in terms of its impact on Hauser’s larger issues, I think this replication is a wash. Some will see partial redemption here, others more sin. I suspect those will cancel out and leave Hauser to stand or fall on the rest of the record, which appears to remain pretty damning. (I say appears because while we  know Harvard’s conclusions, we aren’t privy to all the evidence.)

But will Harvard fire him? The Harvard Crimson certainly thinks it should. After noting that Harvard’s psychology department banned Hauser from teaching next year, the Crimson (the student newspaper at Harvard) calls for his head:

In light of the unambiguous results of the Faculty of Arts and Sciences’s internal investigation, the psychology department should have gone further in its decision. Simply put, Hauser should be fired. If the University truly values its policies on academic integrity in practice rather than name, it should dismiss all community members who fail to uphold those standards, from undergraduates to tenured professors.

In any case*, as the Crimson notes, Harvard doesn’t seem quick to fire, at least not for misconduct:

For a bizarre and unjustifiable set of reasons, Harvard seems to have a historical aversion to dismissing tenured faculty in any circumstance. In fact—as FAS spokesman Jeff Neal told The Crimson last fall—FAS has never begun dismissal proceedings against a faculty member because of research misconduct. However, several incidents from the past two decades show that in such situations, junior Harvard faculty have resigned from their positions when tenured faculty have somehow managed to keep their jobs.

The editorial then contrasts two damning examples of senior Harvard faculty members who kept their jobs despite significant scandal (an economics professor who defrauded the U.S. government while leading a Harvard economic reform program in Russia; a psychiatrist with four instances of plagiarism) with the fates of several junior faculty members who had to resign after charges of academic dishonesty. Enough of this, says the Crimson:

The University should use the Hauser case to declare an end to the treatment of tenure as tantamount to faculty immunity. After all, peer institutions like Yale and Columbia have fired tenured faculty members for academic misconduct, and, as the Education School’s Cathy A. Trower told The Crimson during the eruption of the Hauser scandal this past fall, a 1994 study found that between 50 and 75 tenured professors are dismissed annually nationwide.

Like many, I figured we’d get to this point eventually: An argument over just what the consequences should be. Harvard could dodge this question while everyone waited until some action was taken. But now that the psych department has smacked their colleague by banning him from their classrooms for a year (and the larger faculty extended that to all other departments), the question rises anew.

The school needs to take definitive action and explain it. It was at first destructively silent about the whole scandal when the news broke last summer; I was glad when the school finally got more explicit, partly because they made it clear that the investigation’s findings focused solely on Hauser and not on the many lab associates whose reputations were until then implicitly called into question. But unless I’ve missed something, Harvard has remained largely close-mouthed and inconclusive since then about what price Hauser would pay. It’s unclear, for instance, whether the psych department’s ban on teaching is a) a holding action while they wait for the administration to take action and/or consider stronger action themselves, b) a stall to hope the whole thing blows over, c) the only consequence Hauser will face. It’s also unclear whether the psych department’s action is the strongest possible action it could take from a practical point of view, the weakest, or somewhere in between — any of which seem possible to me. Worst of all, it remains unclear what options the university itself is considering and when it will take them.

If the Harvard administration thinks it can avoid this issue, I hope they’ll think again. Doing otherwise feeds the impression that the university grants stars like Hauser the sort of exemption the Crimson complains of. Whatever Harvard decides about Hauser — and not deciding is the worst decision of all — it needs to make the standards and the process far more transparent than it has so far.

*It’s not clear to me that the psychology department can fire Hauser; it may be prevented by either explicit or implicit legal contraints. My best guess, in lieu of reporting I lack time to put in on this right now, is that any firing would need to be done not by the psych department but by either the administration or the larger faculty — though possibly either the psych faculty alone or the larger faculty could do so. I would hope a department isn’t the only body that can fire a professor, for one shouldn’t rely on a group so close to be the only enforcer of university standards. If any reader knows how this works at Harvard, please let me know in the comments or by .

Corrections: May 3, a few typos fixed, a few phrases tweaked for greater readability. No substantive changes.

Marc Hauser, monkey business, and the sine waves of science

In Marc Hauser’s rush to judgment, what was he missing? (my wrap-up last fall)