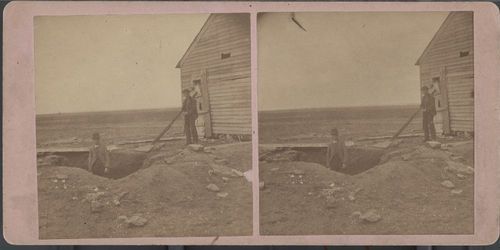 One of many victims of a family of Kansas serial killers who were brought to quick justice in 1873. Photo credit below.

Someone just directed me to Maggie Koerth-Baker’s examination of a riveting example of the differences between a life lived and a life recalled — in this case, the life memorialized, fictively, in Laura Ingalls Wilder’s splendid Little House on the Prairie. Koerth-Baker, a Little House fan (like much of my household), writes of coming across a transcript of a speech Wilder gave in 1937, when she’d become famous for the book series. For reasons apparent, that series did not include this well-told tale:

There were Kate Bender and two men, her brothers, in the family and their tavern was the only place for travelers to stop on the road south from Independence. People disappeared on that road. Leaving Independence and going south they were never heard of again. It was thought they were killed by Indians but no bodies were ever found.

Then it was noticed that the Benders’ garden was always freshly plowed but never planted. People wondered. And then a man came from the east looking for his brother, who was missing.

… In the cellar underneath was the body of a man whose head had been crushed by the hammer. It appeared that he had been seated at the table back to the curtain and had been struck from behind it. A grave was partly dug in the garden with a shovel close by. The posse searched the garden and dug up human bones and bodies. One body was that of a little girl who had been buried alive with her murdered parents. The garden was truly a grave-yard kept plowed so it would show no signs. The night of the day the bodies were found a neighbor rode up to our house and talked earnestly with Pa. Pa took his rifle down from its place over the door and said to Ma, “The vigilantes are called out.” Then he saddled a horse and rode away with the neighbor. It was late the next day when he came back and he never told us where he had been. For several years there was more or less a hunt for the Benders and reports that they had been seen here or there. At such times Pa always said in a strange tone of finality, “They will never be found.”

But was even that the true goods? Well, no, Maggie KB explains, because while the Benders were serial killers who were themselves brought to sudden justice by vigalantes, Pa wasn’t among the latter: The Wilders left Kansas two years before the Benders were exposed.

So why tell people that you left a story out of your memoir, when that story is not true?

Koerth-Baker has the answer — a speculative one, which is the only kind possible — in the remainder of Little House on the Prairie, serial killers, and the nature of memoir. Don’t miss it, or the rest of her splendid stuff.

IMAGE: The excavated grave of one of the Bender’s victims. From the Kansas Memory site.

H/t the crew at DTU.