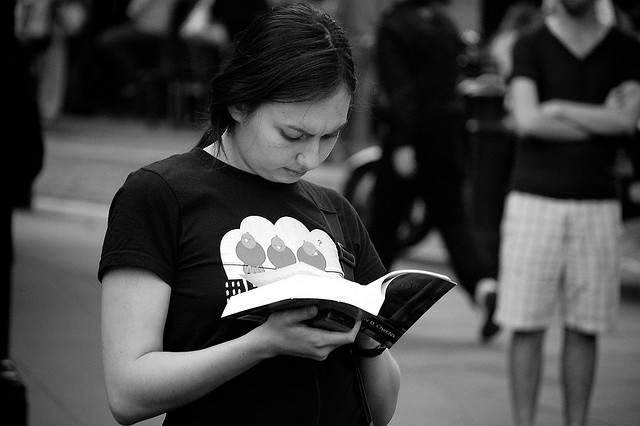 Reading, by Cristiano Betta. See his excellent caption in the full photo credit at bottom.

I got the honors of being guest editor this past Saturday at The Browser, one of my favorite aggregators of good reading. My assignment: Pick a half-dozen of my favorite online pieces from the last month or so. I narrowed this brutal task by focusing on pieces that would add to the great picks the Browser had already made; most of these weren’t on there before. I was also constrained, as I note below, by a reluctance to feature pieces from any of  the several science writers I’ve been lucky enough to work closely with and/or become close friends with; that eliminated some others that I’ve included beneath my half-dozen Browser picks below.

My picks for the Browser, more or less as they appeared there:

Something Wicked This Way Comes, by Atul Gawande. Gawande’s rumination on the SCOTUS healthcare decision makes vivid the human costs of our failed system — and the determination of profiteers and ideologues to obscure this clarity.

Is Autism an “Epidemic” or Are We Just Noticing More People Who Have It?, by Emily Willingham. Autism is like a pool muddied by murky streams. Willingham clears these up. You’ll see the whole business — surface,, depths, contours — far better.

What is the Higgs Boson? by Ian Sample and Laurence Topham Sugar, ping-pong balls, and Sample’s gorgeous accent: This sweet, bouncy 4-minute video on the Higgs discovery may be the simplest and clearest particle-physics explainer ever.

When Lois Pearson Started Fighting Back, by Michael J. Mooney Mooney relates a horrific story — a 62-year-old virgin held captive by a neighbor and repeatedly raped over 12 days — with such empathy and restart that it approaches redemption. I had to stop reading this a couple times, but I’m glad I continued. An astounding tale told with perfect modulation and, always, immense respect for the steely woman who suffered it.

Wiring the Brain: The genetics of stupidity by Kevin Mitchell. To understand intelligence, maybe we should look not about for what creates it, but for what destroys it. Fresh thinking and a great example of why scientists should blog.

Left on my shortlist were another rough half-dozen that I liked as well but which did not make the half-dozen Browser entries either because of mix reasons or because the people who wrote them are close enough friends that I felt I might be accused of favoritism. (In every case, by the way, I was drawn to these friends because I admired their writing, not the other way around.) Consider this then, the rest of my Browser Picks, Long Version:

The Data Detective, by Ed Yong  Yong had three contenders, but I recused him because a) he’s a friend and b) he keeps winning contests I enter, so I’m not about to puff him up any extra. That said, he’s a force, and my bookmarks of favorite reads over the last month included several of his, three of which made my short list. One is the piece links above — his scoop interviewing Uri Simonsohn, who, as Yong described in another fascinating post, developed a data-analysis tool that exposed data fabrication in the works of social psychologist Dirk Smeesters. In addition, i was tempted to list his I’ve got your missing links right here (07 July 2012), but since it is itself a round-up, it didn’t qualify. No link round-up better filters each week’s science writing; it’s indispensable. And Yong, rather frighteningly, keeps getting better even as he keeps up a seemingly impossible pace.

The Good Fight by Eric Michael Johnson. A sharp fresh take on the Altruism Wars by a writer who was strong when he emerged two years ago and gets better by the month.

Global Warming’s Terrifying New Math, by Bill McKibben. An almost furious exploration of how we manage to ignore climate change even as the world literally ignites around us.

Tiny Fireworks, by Deborah Blum. Blum too has become a friend over the past couple years, due to the combination of warmth, insight, amd intelligence that grace this piece on family fireworks.

The Lure of the Fairy Tale, by Joan Acocella. Acocella, reading and harvesting Grimm and otherswith genius. “In sum, the Grimm tales contain almost no psychology…. They come in, clobber you over the head, and then go away.” And a great quote from A.S. Byatt: “‘It doesn’t feel like a warning to naughty infants. It feels like a glimpse of the dreadful side of the nature of things.'” It’s both. And this piece is an example of how The New Yorker’s particular culture still produces some of the smartest, liveliest, jolting literary criticism.

9-Year-Old Who Changed School Lunches Silenced By Politicians by Maryn McKenna. McKenna blogs here at Wired, and I don’t think I’m revealing too much inside info by saying she blew the hits ceiling right off the place with this post; the thing just went crazy, as the post’s post-scripts relate. McKenna likes food and smart writing and has a particular affinity for the point of view of young children. When school officials muzzled a young student whose blog and been delighting McKenna and changing school lunch culture, at least at her school, McKenna responded with a post of quiet but almost frightening fierceness.

The only good abortion is my abortion. BoingBoing’s Maggie Koerth-Baker is another writer who had several contenders. She’s just killing it at Boing Boing, and is on my very shortest list of must-follows. This piece stands out for its extraordinary courage and openness about an enormously painful experience.

Aurora shootings: These two came too late to make Saturday’s list, but are among the most helpful things I’ve read on the Aurora shootings, precisely because they seek to give context rather than read the all-too-spare tea leaves available at this point:

Colorado shooting: how James Holmes fits into the history of rampage killers | Harry J Enten  Very nicely done. And James Holmes’ Brain: Some Initial Speculations, by neuroscientist David Eagleman, worried me with its title but turned out to be restrained and very useful, particularly its distinction between psychosis and psychopathy.

I’ll stop there, though I know I’m missing a ton of good stuff. Please chip in below. I may try to find a way to do this more often.

Photo of woman reading  by Cristiano Betta, by permission, some rights reserved. I love Betta’s caption at Flickr: “I think Melinda can read literally anywhere, anytime. Quite often I’m bored and playing with my iPhone, she will be playing with her toy: books. It doesn’t matter if we are in a crowded tube, on the beach, of outside in the middle of London.”