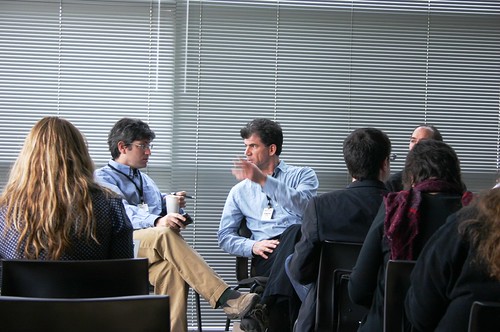 Waking up Carl Zimmer in a panel at last year's ScienceOnline

I’ll be on three panels at ScienceOnline this weekend — one on ebooks, one on open science, and one on “Keeping the Bullshit Filter” (i.e., watchdogging science and science journalism). The ScienceOnline program describes all these (go there and search for the title). For those attending, considering following the streamed sessions, or curious about the topics, I wanted to suggest some reading links.

I welcome more suggestions in the comments and will add them to the post as time allows. Also, if you have questions you’d like us to consider, add those to the comments or email them to me (link at top of page here). And if you follow the programs on twitter (see hashtags below), you can ask questions via twitter as long as you use the hashtag: We’ll be monitoring the twitter feeds as we go along and will try to respond to any incoming.

What’s keeping us from Open Science? Is it the powers the be, or is it … us?

This session explores why we’re not doing more of it (obstacles) and what people can do to make science more open given current tools, structures, and institutions. Some suggested reading:

My Guardian article on Publishing your science paper is only half the job lays out part of my perspective.

Science in the Open is Cameron Neylon’s extremely helpful page on open science. Prime reading there includes PLoS (and NPG) redefine the scholarly publishing landscape and a conversationNeylon had with another sharp open-science thinker, Michael Nielsen.

See too the efforts underway at Mendeley, whose Jan Reichalt is on the panel; VIVO, whose Kristi Holmes will be with us; and ORCID, an effort to create a unique-contributor-id system that will make it easier to credit researchers for doing things other than just publish papers.

This is about watchdogging both science and science journalism, including one’s fellow watchdogs.

How to Set the Bullshit Filter When the Bullshit is Thick My own post on how to calibrate your BSF to account for the uncertainty in science.

In On cheerleaders and watchdogs – the role of science journalism …, and Cool/nifty versus funny-smelling/fishy stories: Why we need both …, Ed Yong and I, respectively, consider how to attend to two kinds of science stories.

And what better case study than the arsenic mess? (We’ll talk about others, but this is a concise, heavily covered case for this sort of linkage.) See posts and round-ups on the Science paper on allegedly arsenicophilic life from biologist Rosie Redfield, me, Ed Yong, Carl Zimmer, and the NY Times. The blogosphere reacted far more quickly than the MSM did — though some of those reacting earliest and most strongly and sharply also write for the MSM.

The rough sequences was a scientist blogging (Redfield) > blogs (Ed, me, many others) > online MSM (Carl’s Slate piece), and finally  >  MSM (the Times). Twitter helped drive things from one stage to another. Each stage was critical, providing more filtering. The most robust filtering, I’d have to say, occurred in the blogosphere and online. And the combined power of Zimmer’s Slate piece and then blog post on What the critics said was simply devastating.

This is a highly instructive case, and it shows the power of blogging’s quickness to drive a correction into the necessarily slower pages of the MSM.

Alison Bass, your Mayberg facts are wrong, wrong, wrong, in which I fact-check some accusations about failure to disclose interests and data. Long, because it had to be. In a way, the key point is at the end: “If we journalists are to have credibility when we call out conflicts of interest, we need to check our facts, and if we get them wrong, we need to acknowledge that when corrected.”

eBooks and the science community

We’ll discuss ebooks and the promises and perils they bring.

eBooks we’ll specifically discuss include Carl Zimmer’s anthology Brain Cuttings (see Steve Silberman’s interview of Carl about that);  the iPad book The Elements, which most people love; some other eBooks we’re not so hot on; and my own embryonic plans for a killer ebook/app version of my The Orchid and the Dandelion when it comes out in two years.

My fellow panelist John Dupuis, a librarian, has put together a bunch of links that explore the implications of ebooks for libraries. Most expect that ebooks may hurt libraries pretty badly, perhaps even killing the small ones, especially since the publishing industry seems to be trying to figure out how to prevent libraries from sharing ebooks. A very tricky situation.

Scott Rosenberg, who will also be at the conference (and at this session, I hope), has been compiling links to eBook-related posts and articles for a while. Some good ones there, with quite a few posts about the Big Drawback: You can’t really share ebooks too well.