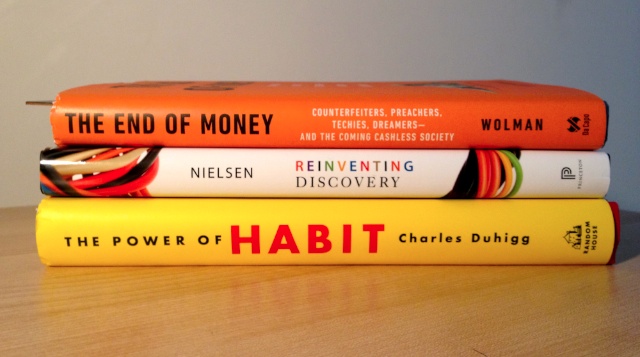 I’m going to give this a run: A post every week or so on what I’m reading , have recently read, or have poked through enough to get a decent sense of.

The End of Money: Counterfeiters, Preachers, Techies, Dreamers — and the Coming Cashless Society, by David Wolman

This is quite a romp, half digerotica, half travelogue. Wolman, a writer for WIRED and other magazines, looks at the possibility that a digital currency and other alternatives will soon render us cashless. He starts by going cashless himself for a year — not without funds, but without any paper or coin currency, using just credit cards, ATMs, and other forms of digital currency. This goes fairly well, which didn’t surprise me terribly; I performed a less committed form of this experiment when living in London last year; I kept a few pounds in paper currency in my wallet but found I rarely needed to use it. Only now and then would nothing else would do. Wolman’s visit to anti-cash crusader Dave Birch, who lived in London, produces a similar moment when Birch, amid rants about currency, digs a one-pound coin out of his pocket to toss into a busker’s guitar case. That London trip is part of a sort of world tour that Wolman leads us on to examine alt-currency experiments and rebellions ranging from digital currency, bartering, and local swap-based exchanges to tax-dodging and counterfeiting.

So how will we pay for stuff tomorrow? “My money is on cellphones,” write Wolman, but “I could be wrong, of course, and in some ways I hope I am, because that will mean incredible innovations are coming.” I for one welcome the change, or lack of; I’m not fond of messing with the stuff, and we’re long past the point where we can walk into a bank and walk out with a few ammo boxes with our fortunes in them. You may feel differently. Whatever your take, reading this book will both entertain you and give your argument more currency.

The Power of Habit, by Charles Duhigg

This mix of neuroscience, marketing, and dogged reporting worthy of The New York Times front page (where Times staffer Duhigg’s stuff usually runs) promises to rise like a rocket; as I write this, it’s 11 days before pub date, and this thing is  #88 on the Amazon bestseller list. Here’s my take on it from a post I ran the other day along with  an excerpt from this week’s New York Times Magazine:

Both feature and book explore a startling and sometimes dismaying collision between the increasingly sophisticated scientific understanding of habits — how they’re formed, how they can be disrupted and changed — and, among other things, companies’ efforts to use that knowledge to steer your habits and money their way. (You can also learn how not to eat too many chocolate chip cookies, if that’s knowledge you actually want.)

Really juicy, fascinating, sometimes confounding stuff here, including a look at Ann Graybiel’s work on habits at MIT; Graybiel described that work at the Society of Neuroscience meeting last November, and it’s one of the most intriguing lines of neuroscience research I’ve seen in a while. The examples Duhigg offers of how those habits are gauged and manipulated by industry are simultaneously splendid and creepy. Are we really this easy to move? Yes. Yes we are.

Reinventing Discovery: The Era of Networked Science, by Michael Nielsen

As I’ve noted before here, Nielsen is one of the sharpest observers of the move toward open science, and in this book he brings all his lucidity and deep knowledge to bear, showing both how the move toward open, networked science rises from traditions of the past and stands to speed science into the future. It shows not just an entire area of human endeavor under change but also brings alive some startling work that open, collaborative models of science is producing. I know of no better or more entertaining guide to the allure and challenge of making science an open collaboration rather than a race for private knowledge.