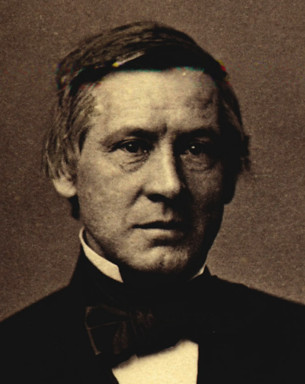 Greg Laden, trying to toss a line between the “New Atheists” and ‘Accommodationists” who are currently squabbling about a dust-up featuring PZ Myers v Chris Mooney & Sheril Kirshenbaum (who apparently rough Myers up a bit in their book Unscientific America), writes:

Now, I just want to make this point: I learned early on (when I was still an altar boy) that where religion and life conflict — where the religion was not doing a good job at explaining the bits and pieces of life that were not making sense — it was OK to drop the details of the religion part and chalk it up to mystery.

I’ve never understood why so many people reject this approach. And I think a bit of historical background helps here. You could ask yourself, for instance, What Would Asa Gray Do?

If you name the important figures in the acceptance of Darwin’s theory of evolution through natural selection in the U.S. in the 1860s, near or at the top of your list should be Asa Gray*, pictured above. Gray was a Harvard botanist who took the fight for Darwin’s theory straight at its greatest obstacle in the U.S.: his Harvard colleague and one-time friend Louis Agassiz. Agassiz was a staunch and eloquent advocate of intelligent design. Gray was a devout Protestant who figured that when he was doing botany, he was tracing God’s work. “The unity we perceive in nature,” he wrote, is one to which “sound science has ever delighted to point, as the proof that all is the direct handiwork of a single omniscient Creator.” As yet, Gray wrote, those arguing that species arise any other way “are bound to show that natural agencies are competent to produce such results …. The burden of proof rests upon them.” This could easily have been Louis talking.
In the 1850s, Darwin, through a long and remarkable series of letters to Gray (some of which are here), led him down a breadcrumb trail to slowly embrace the theory of evolution by natural selection. The breadcrumbs were the botany samples on Gray’s own lab tables. I tell this story in Reef Madness: Charles Darwin, Alexander Agassiz, and the Meaning of Coral. Darwin’s seduction of Gray was a key event in the spread of his ideas. Here’s a much-elided version:

As early as the 1840s, Gray had noted that eastern North America and eastern Asia, especially Japan, both hosted many plants found nowhere else. Identical or closely similar species were growing a world apart. Forty plant genera existed only in these two areas. He noted this oddity in print several times but lacked time to examine it closely.
In 1855, however, …. Charles Darwin … wrote Gray asking for help in solving some plant-species distribution problems he was struggling with. As always, Darwin was humble, solicitous — and subversively Socratic, even while fishing for information he genuinely needed.

As I am no Botanist, it will seem so absurd to you my asking botanical questions, that I may premise that I have for several years been collecting facts on “variation,” and when I find that any general remark seems to hold amongst animals, I try to test it in Plants.

Though Darwin in this particular letter asked about differences among North American alpine plants, his confession to testing ideas on “variation” against Gray’s plant data sums up the course of their ensuing correspondence. Their exchanges would greatly strengthen Darwin’s theories even as he sold them to Gray. …
For two years, then, Darwin plied Gray with questions about plant distribution problems in North America, and particularly about the eastern U.S.-East Asia puzzle, that led Gray to consider more deeply the possible links between species distribution and “variation,” or species change. It was a brilliant strategy, convincing Gray not by rhetoric but by enticing him to reconsider the evidence on his own lab tables….
Finally, in July 1857, Darwin fessed up. With a short letter followed by an abstract, he made Gray the third confidante to know of his theory of evolution, including his ideas on natural selection…. Gray was at first cautiously receptive about Darwin’s theory, then increasingly convinced. The logic seemed sound. Even if Darwin himself worried aloud to Gray that this theory was “grievously hypothetical,” it nevertheless made an empirical argument based on a natural process rather than a supernatural one. It thus appealed to Gray’s empiricism. But what truly sold Gray, in those months between Darwin’s private confession of the theory and his publication of it more fully in the Linnean Society papers and then Origin, was the light the theory shed on the Japan-North America pattern Gray had long been pondering.

This exchange led to a monograph by Gray, On the Botany of Japan
and its Relations to that of North America and of other Parts of the
Northern Temperate Zone, (described nicely here, beginning at pages 9-10) that was one of the first scientific papers to apply Darwin’s theory in the way it would so often be used later — to explain anomalies of species distribution. The experience turned him with finality against the use of creationist arguments in science — and made him an advocate for applying Darwin’s views instead. He soon became the most effective advocate of Darwin’s theory, defeating Louis Agassiz in a prominent series of debates and defending The Origin of Species in The Atlantic, which until then had run one Louis Agassiz essay after another.
But accepting Darwin’s theory, including its mechanistic process of natural selection, didn’t make Gray an atheist. He still believed that God played a role somewhere, somehow — but that he had created life, and perhaps the rules by which it worked, in some manner “lost in the mists of time,” and that his hand worked in an arena beyond the knowable. That was faith. Science was what could be seen. And it was no fair — it wasn’t science — to assert as fact something that you could not observe.
It was a perfectly workable separation for Gray, and has been for many scientists since then. I suppose you can argue that believing in God somehow corrupts you as a scientist. But though I’m an atheist, I haven’t heard that argument phrased in a way that’s convincing — and it flies in the face (ahem) of an awful lot of evidence, in the form of good scientists who’ve done great work while believing in God.
The turf between science and religion is — well, it’s a gray area. And it seems perfectly fine to me to treat it the way Gray did: as a region not to tread in your day job. Science was empirical, and if it wasn’t empirical, it wasn’t science. Religion was belief — a domain beyond proof. That’s why they call it faith.
•Gray’s Wikipedia entry desperately needs some revision to reflect all this.
UPDATE: Jonah Lehrer’s short review of Richard Dawkins’ upcoming book raises an issue that Greg addressed and that runs either under or right atop the surface of these discussions: Does a harsh insistence on atheism really do much to advance the cause of belief in empircal science?