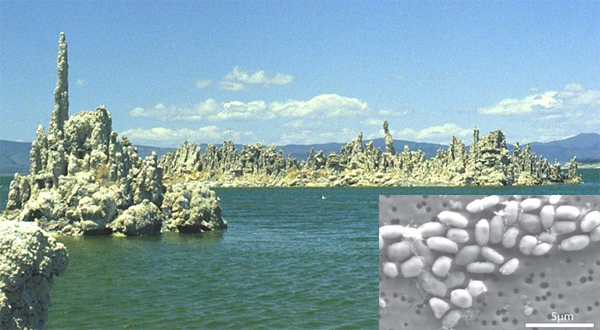 Alert readers will remember the scuffle that broke out last December over the “arsenic-is-life” paper by Felisa Wolfe-Simon and colleagues that claimed to have found that a bacterium from Mono Lake had been coaxed into substituting arsenic for phosphorous in its DNA. Many, including me, criticized both the paper and its presentation: the paper for making claims that seemed to be beyond the evidence; the presentation — particularly the high-profile press conference followed by a refusal to engage critics and journalists — for hype and a refusal to answer legitimate critiques. I chimed in several times; Carl Zimmer rounded up some withering critiques and then some more; the Guardian ably tracked it, as did the Knight Science Journalism Tracker; and in probably the best single round-up, Ed Yong wrapped up his own and other coverage. And @BoraZ assembled a wonderful rabbit hole of a link list.

It’s quite a package, and I’ve not read it in full. But the accompanying post at Science Insider sums up the differences nicely, in a way that matches my quick read:

Several of the Technical Comments question whether contamination or background levels of phosphorus in the cultures could have fueled this growth. Another researcher worries that the DNA that was described as likely having arsenic incorporated in its structure might have been contaminated. Others suggest that arsenic compounds are too unstable to replace phosphorus compounds and be functional. “Their hypothesis that this microorganism contains DNA and other standard biomolecules in which arsenate atoms replace phosphorus atoms would, if true, set aside nearly a century of chemical data concerning arsenate and phosphate molecules,” writes Steven Benner, an astrobiologist at the Foundation for Applied Molecular Evolution in Gainesville, Florida, in one of the Technical Comments

Wolfe-Simon’s team has acknowledged that there were indeed trace amounts of phosphorus in the media used, contributed by mineral salts—they even noted this in their paper. But Wolfe-Simons maintains there was not enough background phosphorus to drive the bacterial growth.

University of British Columbia microbiologist Rosie Redfield, the blogger most critical of Wolfe-Simon both personally and professionally, asserts in one of the Technical Comments that Wolfe-Simon did not go far enough in purifying DNA from GFAJ-1 before testing it for its arsenic components.

The issue of whether arsenic-containing molecules would be stable in a cell is the subject of three of the Technical Comments. In the cytoplasm, arsenate would be reduced to arsenite, which would not be able to substitute for phosphate, Barbara Schoepp-Cothenet, from the Bioénergétique et Ingénierie des Protéines in Marseilles, France, and colleagues, claim in one comment. Moreover, phosphates are incorporated into DNA early in a multistep process, and an arsenic substitute would be unlikely to survive that process intact, notes Benner.

In a response accompanying the Technical Comments, Wolfe-Simon and her co-authors point to work by others that suggests that these arsenic compounds would last longer when part of large biomolecules. Her group has proposed that the bacterium might sequester the arsenic compounds to protect them from breaking down. “In the comments, there were lots of good points that were raised,” says Wolfe-Simon’s co-author Samuel Webb, a biogeochemist at the Stanford Synchrotron Radiation Lightsource in Menlo Park, California. “With anything this intriguing or controversial, there will always be multiple sides.”

If you count it up, it’s nays to 1 yea — but that’s before the rejoinder from Wolfe-Simon and her 11 co-authors, which makes it (sort of) 11-12. This sort of biochemistry is not my forté, so I’m ill-qualified to pass judgment on the more technical aspects of this rather technical debate. Wolfe-Simon et alia appear to address some of the criticisms, but I’ll leave it to others to judge whether they do accurately. (For instance, to the widely held objection that the experiment may have been contaminated by signficant levels of phosphorous in the goo in which they lived — drawing phosphorous there, rather than living on the arsenic, in essence — FWS et alia claim a control experiment safely eliminates that possibility. Beyond me to say whether that’s convincing to their peers. I imagine we’ll hear soon.)

Suffice to say that rather than being decisively settled, this battle has merely rejoined, this time with more substance on the table. As I’ve only just downloaded these, I’m far from making up my mind on whether the Wolfe-Simon case now looks stronger or weaker — and I’m not really qualified to make that call anyway. I’ll try to keep track here, but as I’m going on vacation next week, I won’t track this story then. But I imagine that some of those who tracked this earlier, such as Carl Zimmer and Ed Yong, will do some tracking. And you can probably follow this productively by tracking the #arseniclife tag on Twitter, where Yong’s stream will also likely keep tabs on it. Get comfortable before starting. Tracking this thing is practically a full-time job.

Added May 28: Rosie Redfield lodges three substantive follow-ups late yesterday, here, here, and here.  She makes some technical counter-arguments to the Wolfe-Simon etal defense and suggests some ways to further test their hypothesis. But her sharpest rebuttal is probably this:

Most of their responses take the form of ‘our interpretation could be correct on this point if…’.  In many cases there is indeed a small possibility that it could, but there are so many of these points of interpretation, each with only a very small probability of being correct, that I don’t think anyone will find the arguments convincing.

H/t to Lucas Brouwers for the heads-up.

*NB: These were peer-reviewed responses, and we don’t know the details of the peer-review process, which is quite opaque, and came under heavy fire. (Rightly, I think; I’m among those who feel Science should have asked for move evidence for claims this extraordinary, and, given the outcry, should have explained how it reviewed the paper.) We don’t know much more about how this round went either. I would suspect and hope that Science would lean toward publishing critiques, given the prior outcry. On the other hand, there’s a strong history in scientific publishing of NOT publishing harsh critiques, even sometimes sound ones, and — the real bugbears — there’s no way to know how they went about things or how many supportive or critical responses they did not publish.

Redfield, Rosemary J. Comment on “ A Bacterium That Can Grow by Using Arsenic Instead of Phosphorus .” Science, no. 1: 1-1.