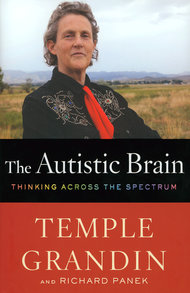 Temple Grandin has a new book out, and over at the Times, I’ve a review of it — rather mixed, I’m afraid:

For a quarter century, Dr. Grandin — the brainy, straight-speaking, cowboy-shirt-wearing animal scientist and slaughterhouse designer who at 62 is perhaps the world’s most famous autistic person — has been helping people break through the barriers separating autistic from nonautistic…. Dr. Grandin has helped us understand autism not just as a phenomenon, but as a different but coherent mode of existence that otherwise confounds us. In her own books and public appearances, she excels at finding concrete examples that reveal the perceptual and social limitations of autistic and “neurotypical” people alike.

As I note, when these strengths

burst upon the scene in her 1995 book “Thinking in Pictures,” they amazed people, as they continue to do in many of her YouTube and TED talks (not to mention the 2010 biopic “Temple Grandin,” in which she was played by Claire Danes). Alas, in “The Autistic Brain,” her fourth book, she largely abandons these strengths, setting out instead to examine autism via its roots in the brain. It does not lead to rich ground.

The problem? In this book, which I suspect was conceived at the height of the brain-book bubble, before various disasters slowed it down, Grandin moves to explain autism via the brain. The results, I fear, make a sparse repast.

Get the rest at  ‘The Autistic Brain’ Review — Temple Grandin Traces Roots of a Disorder – NYTimes.com.