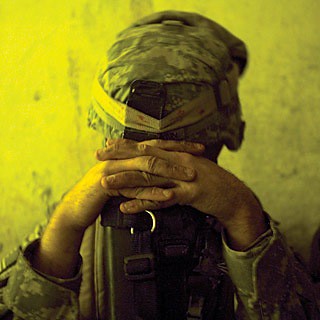 A few days ago the Times ran a story wondering why antipsychotics aren’t helping American combat vets with PTSD. The Times calls this finding ‘surprising.’ Yet it should surprise no one. For one thing, antipsychotics haven’t worked very well for off-label treatments in general. But the real problem is that almost nothing the US Veterans Administration (VA) tries works for American vets with PTSD.

Drugs widely prescribed to treat severe post-traumatic stress symptoms for veterans are no more effective than placebos and come with serious side effects, including weight gain and fatigue, researchers reported on Tuesday.

The surprising finding, from the largest study of its kind in veterans, challenges current treatment standards so directly that it could alter practice soon, some experts said.

Ten percent to 20 percent of those who see heavy combat develop lasting symptoms of post-traumatic stress disorder, and about a fifth of those who get treatment receive a prescription for a so-called antipsychotic medication, according to government numbers.

I haven’t seen the paper yet, for this study, though done with taxpayer money on tax-funded soldiers who are treated with taxpayer dollars, is not open to public view. However, I’m not at all surprised with these results, for a) antipsychotics are a weird choice for PTSD to start with, since they’re aimed at psychoses, not mood disorders, and, more especially, b) almost nothing the VA aims at PTSD works, because their absurd treatment regime includes paying veterans to get sick but not to get better. This is why few VA programs work — and why PTSD rates in US vets are 2 to 5 times that of rates in UK and other veterans of the same conflicts.

If you want to know why these treatments aren’t working, you can get much of it from a feature I wrote three years ago, but which remains painfully relevant because of the resistance of both the VA and wider US society to questioning the VA’s unproductive approach to PTSD. [Note: I added this excerpt on Aug 19, 2011]: Here’s the passage about how the VA’s benefits package undermines its treatment efforts:

[W]hat does a veteran gain with a PTSD diagnosis? One would hope, of course, that it grants access to effective treatment and support. This is not happening. In civilian populations, two thirds of PTSD patients respond to treatment. But as psychologist Christopher Frueh, who researched and treated PTSD for the VA from the early 1990s until 2006, notes, “In the two largest VA studies of combat veterans, neither showed a treatment effect. Vets getting PTSD treatment from the VA are no more likely to get better than they would on their own.”

The reason, Frueh says, is the collision of the PTSD construct’s vagaries with the VA’s disability system, in which every benefit seems structured to discourage recovery.

The first benefit is health care. PTSD is by far the easiest mental health diagnosis to have declared “service-connected,” a designation that often means the difference between little or no care and broad, lasting health coverage. Service connection also makes a vet eligible for monthly disability payments of up to $3,000. That link may explain why most veterans getting PTSD treatment from the VA report worsening symptoms until they are designated 100 percent disabled—at which point their use of VA mental health services drops by 82 percent. It may also help explain why, although the risk of PTSD from a traumatic event drops as time passes, the number of Vietnam veterans applying for PTSD disability almost doubled between 1999 and 2004, driving total PTSD disability payments to more than $4 billion annually.

Perhaps most disastrously, these payments continue only if you are sick. For unlike a vet who has lost a leg, a vet with PTSD loses disabil- ity benefits as soon as he recovers or starts work- ing. The entire system seems designed to encour- age chronic disability. “In the several years I spent in VA PTSD clinics,” Frueh says, “I can’t think of a single PTSD patient who left treatment because he got better. But the problem is not the veterans. The problem is that the VA’s disability system, which is 60 years old now, ig- nores all the intervening research we have on re- silience, on the power of expectancy, and on the effects of incentives and disincentives. Som times I think they should just blow it up and start over.” But with what?

Richard A. Bryant, an Australian PTSD re- searcher and clinician, suggests a disability system more like that in place Down Under. An Australian soldier injured in combat receives a lifelong “noneconomic” disability payment of $300 to $1,200 monthly. If the injury keeps him from working, he also gets an “incapacity” payment, as well as job training and help finding work. Finally—a crucial feature—he retains all these benefits for two years once he goes back to work. After that, incapacity payments taper to zero over five years. But noneconomic payments—a kind of financial Purple Heart—continue forever. And like all Australians, the soldier gets free lifetime health care. Australian vets come home to an utterly different support system from ours: Theirs is a scaffold they can climb. Ours is a low-hanging “safety net” liable to trap anyone who falls in.

Someone will accuse me of questioning the honesty of veterans. I’m not. Pay any group of people to stay sick, and you’ll have a hard time making them better. I’m questioning the way the VA diagnoses and treats PTSD. It’s one of the great fails in psychiatry of the last 40 years — and that’s saying a lot.