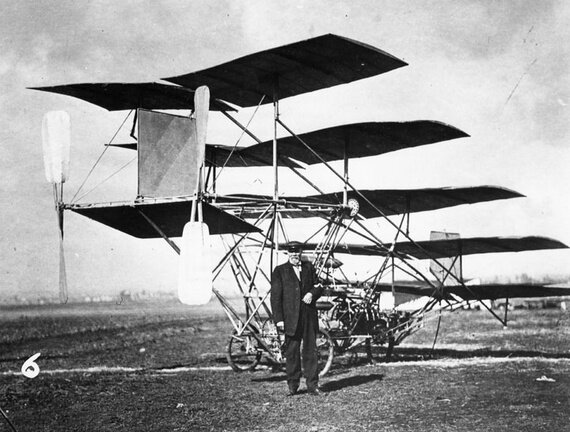 J.S. Zerbe’s ‘multi-plane’ in 1910, when, Thompson tells us, ‘aircraft’ was one of the most common words in patents. (Wikimedia Commons)

From Derek Thompson at The Atlantic:

In a series of papers studying the history of American innovation, Packalen and Bhattacharya indexed every one-word, two-word, and three-word phrase that appeared in more than 4 million patent texts in the last 175 years. To focus their search on truly new concepts, they recorded the year those phrases first appeared in a patent. Finally, they ranked each concept’s popularity based on how many times it reappeared in later patents. Essentially, they trawled the billion-word literature of patents to document the birth-year and the lifespan of American concepts, from “plastic” to “world wide web” and “instant messaging.”

The overall story, Bhattacharya told me, follows the shift from “atoms to bits”—from the loud world of trains and cars in the 19th century to the invisible life of software. But within that meta-narrative (and this is where the colors come in handy), you can see moments where one industry dominated the patent literature—like chemistry (black) in the 1930s, medicine (red) in the 1980s, and computers (green) in the last few decades.

And the serious winners are medicine and computers, which, Thompson says, “have reigned over patents like no two categories have dominated any previous period of invention in U.S. history.

This is a fun read and a good reminder (we can’t get them too often) that not just patents but science tends to reflect the cultural obsessions of an age.