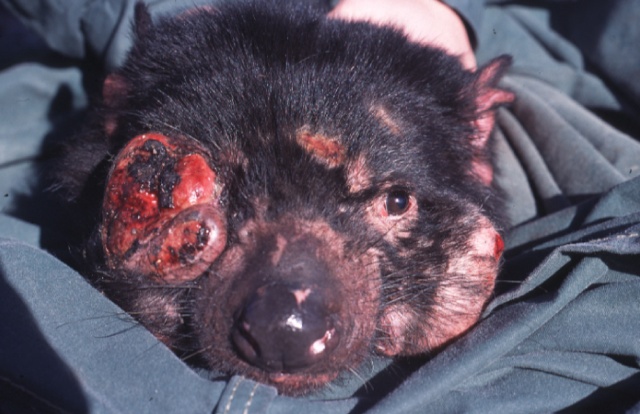 In the wilds of Tasmania and in labs in England, researchers are making some encouraging advances in their attempt to decode what may be a ticking bomb: an ugly, lethal cancer — a contagious one, a potential nightmare — that has been spreading among Tasmanian devils. As Ewen Callaway reports  today at Nature:

The first cases of devil facial tumour disease (DFTD) were detected in the mid-1990s, when people noticed the disfigured faces of devils in northeast Tasmania. These tumour cells pass from devil to devil when the aggressive marsupials mate and fight for food.

Once seeded, the cancer cells divide swiftly to form large malignant growths, and most infected devils die from starvation or metastases to vital organs within months. DFTD has marched steadily across Tasmania, and now a pocket in the northwest part of the island is the only place home to whole populations of uninfected devils. In the hardest-hit areas, more than half of devils are infected and many die as they hit their reproductive prime.

Four years ago, in Harper’s, David Quammen examined this plague in one of the most riveting pieces of science writing I’ve ever read. As he explains there, the Tasmanian devil outbreak raises the frightening possibility that other cancers could develop the capacity to spread much as colds or skin infections do. The key to how they do so would presumably be found in the DNA of the ugly tumors the devils develop on their faces. The cancer seems to spread when the devils, which bite each other on the face while fighting or mating, get a bit of tumor in their teeth. Somehow, it seemed, DNA or other material from those cancerous tumors caused the cancer to spread — a highly alarming possibility.

Now Callaway reports that a team led Elizabeth Murchison at the Wellcome Trust Sanger Institute in Cambridge, England, working on DNA from tumors in two different devils at opposite ends of Tasmania, seems to be narrowing the search for mutational culprits.   By sequencing the genes in tumors in the two devils and comparing those with one another as well as with two healthy devils, they have filtered out a short list of about 1000 genes that seem unique to the tumors, and on these genes they and others will focus in research to come.

Murchison plans to sequence the genomes of more devils and tumours to get a better handle on the mutations responsible for the disease’s spread. With luck, the tumours will be caused by mutations that can be treated by the growing number of targeted drugs being developed to treat human cancers, she says. But it is more likely that genome sequencing could identify genes that are expressed by the tumour but not by healthy cells. A vaccine composed of the products of such genes could spur the devil’s immune system to go after the tumour.

Belov hopes to learn how the devil tumour slips under the immune system’s radar. One of the genes found missing from the tumour resembles genes that control T cells, which do not ordinarily enter the malignancies. “There is still so much that needs to be done to understand this dreadful disease. But the tumour genome will hopefully help us to get there faster,” she says.

In the meantime, the devils are fighting to stick around long enough to avoid decimation — and field workers are trapping devils in the wild to check their health and track the spread of the disease. As Quammen reported, this isn’t always an easy call. Here a biologist named Chrissy Pukk examines a devil, nicknamed Rudolph, to see how he fares:

Chrissy Pukk knew each devil at a glance.

Rudolph’s condition gave her pause. He was a two-year-old, nicely grown since she had first trapped him, his red nose healed . . . but there was something on the edge of his right eye. A pink growth, no bigger than a caper. “Oh shit,” she said. Tumor? Or maybe it was just a little wound, puffy and raw. She looked closely. She peered into his mouth. She palpated lymph nodes at the base of his jaw. The volunteers and I waited in silence. Evolution had shaped Rudolph for survival, and evolution might take him away. It was all evolution: the yin of struggle and death, the yang of adaptation, DFTD versus Sarcophilus harrisii. The leaping tumor, well adapted for fast replication and transmissibility, has its own formidable impulse to survive. And no one could know at this point, not even Chrissy, whether it had already leapt into Rudolph.

“Okay,” she said, sounding almost sure of her judgment, “I’m gonna give him the all clear.” She released him and he ran.

For the news, see Ewen Callaway (twitter), “Field Narrows in Hunt for Devil Tumour Genes,” Nature, 16 Feb 2012. Thanks to Callaway for corrections (above, struckthrough) to my original version.

For the deep background and one of the best and creepiest science stories you’ll ever read, see the peerless David Quammen,  “Contagious Cancer: The evolution of a killer,” Harper’s, April 2008. His book on the cancer, Spillover, should be out soon. You can also catch Quammen talking about the cancer on this very fine RadioLab segment, Devil Tumors.