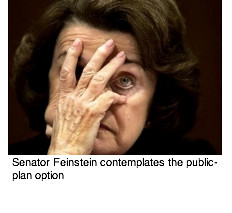 I can’t claim to be ‘objective’ or neutral on health-care reform — but who can? Everybody needs health care, some more than others. I need it less than most, as my family and I are, knock on wood, generally blessed with good health. Even so, we laid out $18K last year for health care, still owe money — and no one in the family ever entered an ER, got a scan, received a prescription costing more than $100, or got admitted to a hospital. And we’re among the lucky ones who can (supposedly) afford insurance. (We pay $10K for a plan with a $5K deductible.) This is one of several reasons I’m profoundly dissatisfied with the health-care system we have and recognize what should be obvious: We need major health-care reform in this country.
So why, as a country, do we seem so determined NOT to get it? Or rather, why does Congress seem so determined to not fix something so clearly broken? If a foreign government were causing 45 million Americans to go without health care while driving tens of thousands of others into bankruptcy, we’d be on this thing. Apparently it’s okay, however, if we do this to ourselves. And as of this week, the buzz is that Obama’s efforts to reform health-care are in serious trouble because of a lack of Congressional support. (Never mind htat polls show the public overwhelmingly supports his efforts.) Why is Congress falling down?
Nate Silver at FiveThirtyEight, the site that rose to prominence handicapping the 2008 presidential race, has a very illuminating piece on suggesting at least part of the answer. He breaks down how different health-care special interest money appears to affect the support given the public-plan options by different types of politicians (i.e., liberal dems v mainline dems v ‘centrist’ dems v centrist GOPers). Bottom line: the money seems to have the most sway over ‘centrist’ or ‘mainline’ Democrats who are from regions with high per-capita levels of health-care spending.

Lobbying contributions appear to have the largest marginal impact on middle-of-the-road Democrats. Liberal Democrats are likely to hold firm to the public option unless they receive a lot of remuneration from health care PACs. Conservative Democrats may not support the public option in the first place for ideological reasons, although money can certainly push them more firmly against it. But the impact on mainline Democrats appears to be quite large: if a mainline Democrat has received $60,000 from insurance PACs over the past six years, his likelihood of supporting the public option is cut roughly in half from 80 percent to 40 percent.
(One caution: It’s possible that we’re confusing cause and effect: perhaps senators receive a lot of money from the insurance industry because they hold conservative positions on health care, rather than the other way around. Although I believe that accounting for ideology should correct for most of this, I’m open to suggestions on an alternative model design that would better be able to disentangle these effects.)
Note that PAC money spent on Republicans is completely wasted insofar as the public option goes. Someone like Jim DeMint is almost certainly not going to support the public option to begin with; you don’t need to give him any further incentive to oppose it! Of course, the insurance industry may get its money’s worth in other ways, such as by generating more vigorous opposition from these Republicans to more “bipartisan” versions of health care reform.

What happens if we set the lobbying variable to zero for all senators? That is, suppose that the health care insurance industry were prohibited from making political contributions? In that case, the model predicts, 47 senators would currently support the public option, as opposed to the 38 who actually do. In other words, the insurance industry’s influence appears to swing about 9 votes against the public option. Whatever number of senators wind up supporting the public option, add 9 to it, and you’ll have a decent ballpark estimate for what the level of support might be if not for insurance industry contributions. Note, however, that we haven’t attempted to model the impact of contributions from other interest groups, including both pro-health reform organizations such as labor unions or other stakeholders like pharmaceutical companies.
We can also estimate which particular senators are most likely to have been influenced by lobbying money. The following chart presents the model’s estimates of the net decrease in a senator’s probability of supporting the public option based on the quantity of insurance PAC money that he has received:

He then includes a chart showing those whose votes have likely been most swayed. Here’s where to look if you want to understand the wavering of people like Dianne Feinstein, who has not publicly come out against the public plan but who said on the Sunday talk shows that she doubted Obama’s full plan could go through … because it lacked support of, presumably, Democrats like herself. And, she added with rather stunning candor, because cutting back excess health-care spending in HER state would simply cost her state too much money:

FEINSTEIN: Ergo, you have enormous problems in my state. California’s bigger than the populations of 21 states and the District of Columbia put together. We have an enormous health care industry, 350 hospitals. University of California alone has 34,000 health care workers, has health care worth $4 billion a year. So it’s complicated. Additionally, the state is in a state of financial catastrophe. I think that’s clear. So, if you change the Medicaid rate, for example, it has an impact on California between $1 billion and $5 billion a year. Now, how could I support that? Because it would take down the state.

As Crooks and Liars points out, Feinstein’s argument here ignores the fact that both consumers and employers would have billions of dollars freed up every year in savings in what they paid out for insurance and health care. This would improve California’s economy, not harm it.
Other key players such as Harry Reid and Kent Conrad are also high on this list.
This is nauseating to contemplate. I’ve yet to hear a convincing argument — one based on realities rather than ideological fears of a single-payer Trojan horse or “unfair” competition a public plan would pose to the ludicrously inefficient private insurance system — as to why we shouldn’t have a public plan option. So why aren’t Democrats supporting it? Or rather, why are Democrats killing the public-plan option?
Boy, I’d hate to think it’s the money. But the thinness of the arguments make me think I’d be stupid to think otherwise. As Nate Silver put it,

“I’m generally not one to carp about special interest money — seeing politics through that lens is often an overly reductive formulation that serves as a catch-all excuse any time Congress does something you don’t like. But on something like the public option, which has broad public support and which would probably reduce — not increase — the long-run bill to the taxpayers, it is just about the only way to explain what’s going on in Washington.”