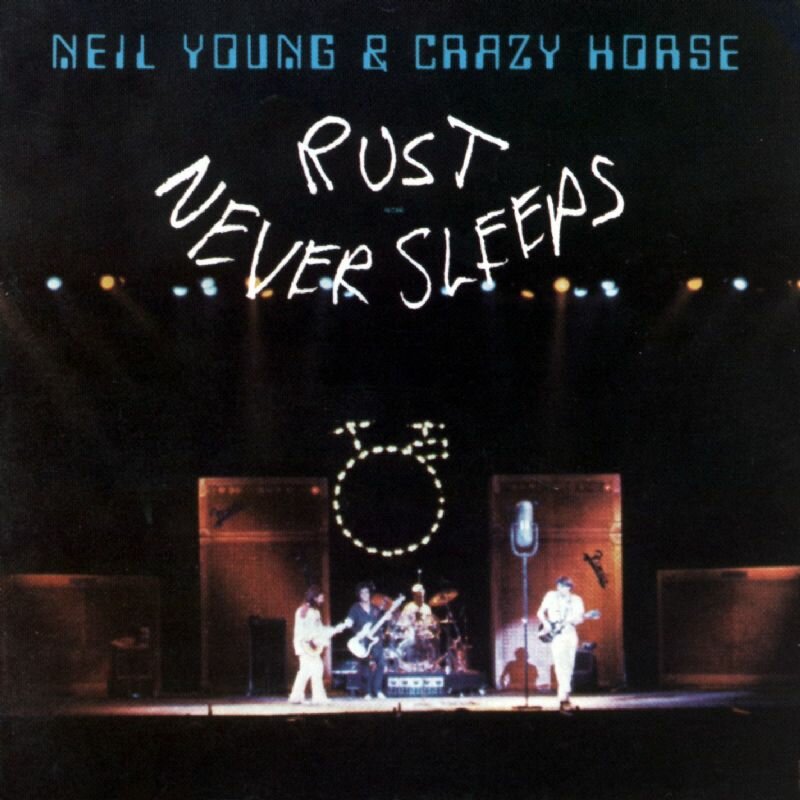 A couple weeks ago I found myself staring at an undersized image on my iPhone: the wee tiny cover of Neil Young’s 1979 album Rust Never Sleeps, which I was listening to yet again. Rust deepens nicely over time, because time is its subject. The title track* is about remaining rustless as you age. In “Powderfinger,” another particularly strong track, a youth faces death, which is the moment, as I think it was Dylan supposedly said, in which you’re as old as anyone can get. This young man, “just turned twenty-two,” has mixed feelings about this. There’s a beautiful anger in Young’s voice as he resumes singing after the second of the song’s raggedly lyrical guitar solos. But this youth accepts his end both grudgingly and gracefully (“Remember me to my love / I know I’ll miss her…”: a counter to the title track’s insistence on constant regeneration. 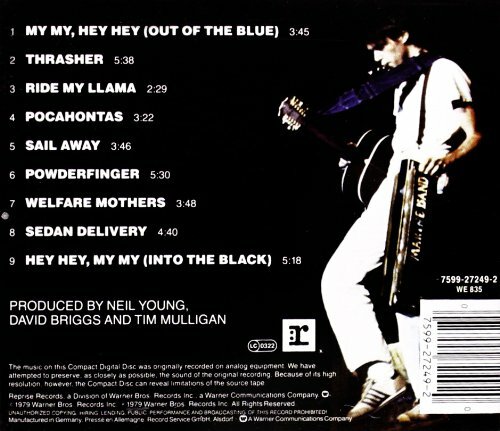 I first bought Rust in 1987, and for years the album cover often leaned on the wall behind my turntable as the LP was spun, flipped, and spun again: Neil’s one-man version of “Hey Hey, My My” to open the acoustic, A side, followed by “Ride My Llama” (“I’d like to take a walk, not around the block…”), “Pocahontas,” and “Sail Away”; flip the disc to get “Powderfinger” lyrically lighting up the album’s electric side, and the title track’s furious, grungy, amplified version closing it. Time, loss, escape, death, rebirth. Flip it again: repeat.

I rarely saw the album cover once digital came. I’m not quite sure why last month I kept gazing at the tiny iPhone-size version. But I was entranced in a different way with this image of Neil: with his lean easy tallness and his hair black and his smooth skin, weaving, I imagined, the Powderfinger solo I was listening to at that moment. He looks so young. He was in his thirties. Many a morning he probably looked in the mirror and thought to himself, as one does starting about then, The years are starting to show. But just look at this man: So beautiful. So young.

Yet, as I think anyone who has followed Neil since then would agree, he was then a lesser man than he would become. Magnificent — yet a younger version of himself. Whole, but not complete.

A few days after gazing at tiny Neil, somehow diverted by Twitter to YouTube, I encountered another time-tinted stage presence: Bruce Springsteen singing “Thunder Road” in Perth just 10 days earlier, on February 7 of this year. Bruce, at the end of another epic evening, sixty-something and soaked in sweat, came out for an encore. (May we all look so good at that age, or ever, in tight wet tee-shirts.) Instead of bringing the band out for this wall-of-sound hit, he sang it solo acoustic. He was out there not to recreate a younger version of himself, but to look back at it.

“Thunder Road” is from Born to Run, an album that threw Springsteen into a fame-making machine he hated. Hated. Next to the title track, “Thunder” is arguably the album’s most adolescent composition. It’s a paean to the idea that in youth you can remake the world simply by driving away from your past with enough horsepower. As if your history would not ride in the trunk.

Born to Run followed Bruce around a long time. A dozen years later (the same year I bought Rust Never Sleeps, by chance), Bruce released Tunnel of Love, which he once called his first album for grown-ups. I would discover Tunnel only a few years later, at a timely time. No illusions here, mister, about leaving your past behind. Tunnel is all about living with ghosts and mistakes and baggage and limitations. He sneers at the kinds of hopes he once held and fueled:

Some girls they want Handsome Dan
or some good-looking Joe.
On their arms some girls like
a sweet-talking Romeo.

Well ’round here, baby,
I learned you get what you can get.
So if you’re rough enough for love,
Honey, I’m tougher than the rest.

The title track, “Tunnel of Love,” is a work of stealth. It opens like a tinkly teenage carnival ride and sucks you into a dark tour of middle age. You must embrace even new love with the stench of the old still upon you:

‘Well the house gets haunted and the
ride gets rough.
You got to ride down, baby,
into that tunnel of love.”

On the other hand, those rough enough and ready can find moments of contentment, as in “All That Heaven Will Allow”:

Which is all a pit stop, along Bruce’s never-ending drive, on the way to a night in Perth, 27 years later and 39 years after Born to Run, where he takes “Thunder Road” and reshapes an adolescent anthem into an homage to age. It’s not just that he plays it solo and slow. He reforges all the crucial phrasings and melodic turns and dynamics to turn them downward. Where once they rose in defiance, now they fall.

He has replaced his love song to youth with two other songs.

One is a love song to his fans, many of whom, of course, have been aging with him for years. When early on he pauses to let them sing a line on their own (“Show a little faith, there’s magic in the night…”; it’s just after the 1:00 mark in the video above, best viewed if you take in the 60 seconds before as well), it’s as if all these people signing with him go inside him to get the lines and bring out new energy. The sense of connection is astounding. Listen to them sing; look at his face when with closed eyes he hears them. What a happiness this man has made.

He’s also delivering another love song: a Tunnel of Love-level love song sung to the young Jersey musician who, writing this tune 40 years before, let himself think that you could outdrive your troubles — or at least use that proposal to seduce a girl and yourself and a planet full of fans. This 2014 rendering gently taps that earlier Bruce on the shoulder to warn and console him. The Bruce in Perth, singing to the old (young) Bruce in Jersey, has accepted his age, and he has never been more beautiful. When he lets the audience sing, “Maybe we’re not that young anymore,” it’s one of the song’s few rising lines. It blooms as a statement not of loss but of gain, and it seems to fill his heart.

Aging brings a thousand cruelties. Perhaps the most bizarre is the intermittent realization that we so fiercely resist the fact that we are always younger versions of ourselves — rough drafts of the people we will become. Try to entertain that notion for a second. It’s hard. It stays hard. I am now closer to Bruce’s age now than I am to Bruce’s age back then, and I still can’t do it. If you’d asked me to try when I was in my 20s or 30s, I’d have inwardly scoffed, even though I was paying ruinous interest rates on my early bad bets; that junk in the trunk was quite a load. No wonder we flinch. Even if part of you knows that at some level you’re mostly at sea, your operating assumption is that you have this thing down; you’re older now; you got this. A useful delusion. It’s too dispiriting to confront how incomplete we are, to contemplate how much we lack because we haven’t lived longer. And no one’s in a hurry to reach the end.

Yet somehow life gets better anyway.

My 12-year-old reads everything and seems to remember every word. Two weeks ago, as we were riding a ski lift up into a bright icy sky, he asked me about something he’d read recently, probably in Muse. He said, Dad, Dad — Did you know there’s this theory about time? It’s that time doesn’t really exist. It’s that time is really just a human invention, a conceptual trick we created to keep ourselves from going crazy because we can’t deal with everything happening at once.

I said I didn’t know that, but it made sense.

*The title track’s title is “Hey Hey, My My,” but the album’s title, Rust Never Sleeps, is from the song’s take-away line.