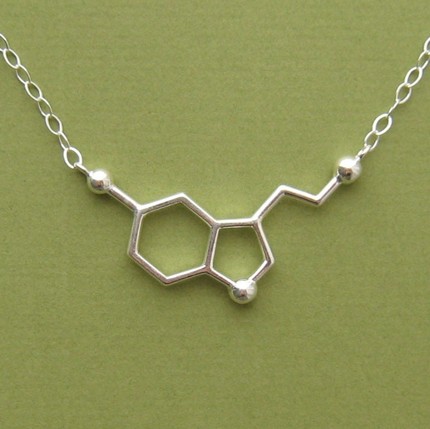 Serotonin can also be used for necklaces. Photo credit below.

They’re versatile enough, in fact, to get hijacked by parasitic worms who use them to enslave perfectly innocent shrimplike creatures called gammarids. As Carl Zimmer relates, in Parasites Use Sophisticated Biochemistry to Take Over Their Hosts , posted last week at the TImes:

Other parasites manipulate their hosts by altering the neurotransmitters in their brains. This kind of psychopharmacology is how thorny-headed worms send their hosts to their doom.

Their host is a shrimplike crustacean called a gammarid. Gammarids, which live in ponds, typically respond to disturbances by diving down into the mud. An infected gammarid, by contrast, races up to the surface of the pond. It then scoots across the water until it finds a stem, a rock or some other object it can cling to.

The gammarid’s odd swimming behavior allows the parasite to take the next step in its life cycle. Unlike baculoviruses, which go from caterpillar to caterpillar, thorny-headed worms need to live in two species: a gammarid and then a bird. Hiding in the pond mud keeps a gammarid safe from predators. By forcing it to swim to the surface, the thorny-headed worm makes it an easy target.

Simone Helluy of Wellesley College studies this suicidal reversal. Her research indicates that the parasites manipulate the gammarid’s brain through its immune system.

The invader provokes a strong response from the gammarid’s immune cells, which unleash chemicals to kill the parasite. But the parasite fends off these attacks, and the host’s immune system instead produces an inflammation that infiltrates its own brain. There, it disrupts the brain’s chemistry — in particular, causing it to produce copious amounts of the neurotransmitter serotonin.

Serotonin influences how neurons transmit signals. Dr. Helluy proposes that the rush of serotonin triggered by the thorny-headed worms corrupts the signals traveling from the eyes to the brain. Normally, an escape reflex causes the gammarid to be attracted to the darkness at the bottom of its pond. Thorny-headed worms may cause their host to perceive sunlight as darkness, and thus swim up instead of down.

Whether humans are susceptible to this sort of zombie invasion is less clear. It is challenging enough to figure out how parasites manipulate invertebrates, which have a few hundred thousand neurons in their nervous systems. Vertebrates, including humans, have millions or billions of neurons, and so scientists have made fewer advances in studying their zombification.

That’s not even the weirdest thing in the story. Get the goods at  Parasites Use Sophisticated Biochemistry to Take Over Their Hosts – NYTimes.com.