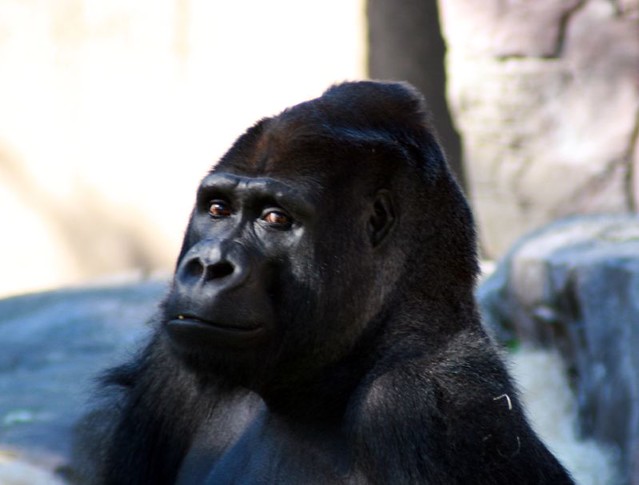 Evolutionary anthropologist John Hawks, eagle-eyed as ever, calls out a common mistake made by one expert in a response to findings in the gorilla genome:

The Nature News story on the gorilla genome includes this section relevant to the evolution of hearing in gorillas and humans:

[from the Nature story:] Some of these rapid changes are puzzling: the gene LOXHD1 is involved in hearing in humans and was therefore thought to be involved in speech, but the gene shows just as much accelerated evolution in the gorilla. “But we know gorillas don’t talk to each other — if they do they’re managing to keep it secret,” says Scally.

“This weakens the connection between the gene and language,” says [Wolfgang] Enard. “If you find this in the gorilla, this option is out of the window.”

This is one of the genes that I have been working on with reference to its acceleration on the human lineage. It is a mistake to view the evolution of hearing to be directed specifically to language; instead human and gorilla lineages are both adapting to a aural environment different from ancestral hominoids. In both these lineages, there was an increase in body size and reduction in the mean frequency of vocalizations, enough to prompt adaptive changes. In humans, we have had additionally the addition of language as a communication system, which has its own auditory requirements. The connection with language is only indirect, in that human-specific changes to this and other genes provide evidence of adaptive change in the auditory system.

Hawks addresses what strikes me as a common error in thinking about genes, traits, and evolution: The assumption that when we talk of a gene or a trait and its role in evolution, it’s tempting to think that because that gene or trait helped create an outcome, then it more or less codes FOR that outcome. Thus a gene that seems necessary for understanding speech, Hawks argues here, has been mistaken as essentially coding specifically for that ability,r ather than creating sub-abilities, as it were, that underlie the “final” trait  that we happen to focus on, which in this case is comprehending speech. An equivalent might be mistaking, say, a LIMBO2 gene, which helps build limbs, as necessary to wings, when in fact it simply helps create limbs — legs or arms in some species, wings in birds.

Implicit here is another mistake: overlooking the multigenic nature of complex traits and abilities. How might the LOXHD1 gene be crucial to both gorillas and humans but (help) generate different auditory traits in each? Because it works with different sets of other genes in the two species, and, of course, vastly different physical and social environments.

This isn’t a dumb mistake. In fact it’s quite understandable and thus easy to make. All the more reason to be aware of it.

Also Kerri Smith’s sharp write-up of the gorilla genome findings at Nature, and another by Alok Jha at the Guardian, which along with being quite sharp, wins the cute-photo award for the day.