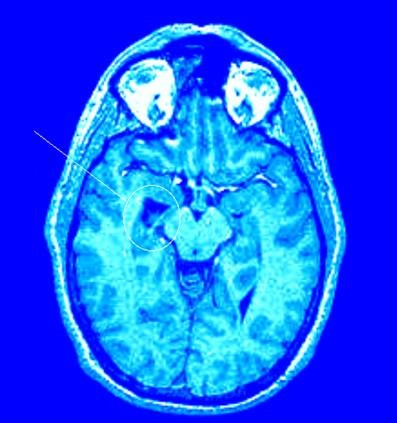 The hole in my hippo (circled, just NW of center).

What happens when you can’t remember the maps in your head? How many ways can you get lost — and what’s the best way to get found again?

Last week, as part of the second anniversary celebration of Story Collider, the science storytelling show based in New York, I told of how a transient episode of spatial amnesia  — as in, I couldn’t remember the way to my kids’ preschool — forced me to explore these questions. The quest sent me chasing both the science of memory and the connections between space, memory, depression, love, and happiness. The theme of the show was “I Am Science” — that is, the various paths that people take to lives in or near to science. In my case, my amnesia event didn’t really make me science. But as I describe, it sure quickened my interest.

You can listen by clicking here or by clicking the play button below (it won’t show up on mobile devices, though). If neither of those works, go direct at the Story Collider page, where you can also pull it onto iTunes and such. For more Story Collider stories about science, including find material from writers such as Carl Zimmer, Amy Harmon, Bora Zivkovic, John Rennie, and Tom Levenson and scientists such as Daniella Schiller, Nancy Parmalee, Doug Fields, and Naomi Azar. Many thanks to Ben Lillie, Brian Wecht, and Erin Barker, who make Story Collider happen, and to fellow storytellers that night Joy Hirsch, Joe LeDoux, and Darlene Cavalier.

David Dobbs: Lost in your brain by The Story Collider