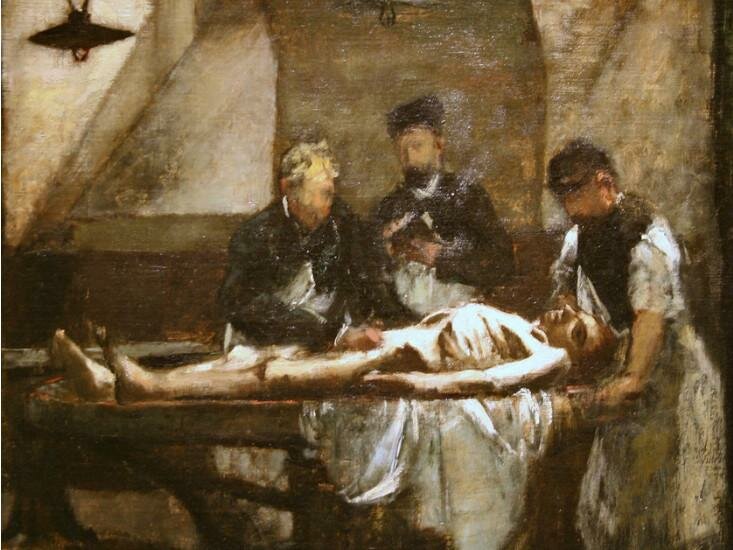 Henri Gervex, Study for ‘Autopsy at the Hotel-Dieu,” 1876. Courtesy National Gallery of Art

The good folk at Nautilus, the luscious new(ish) online science magazine, asked me to write something for their issue on uncertainty. The vague mystification over the call for an autopsy of James Gandolfini, may he RIP, gave me my cue:

When Italian authorities confirmed Wednesday that James Gandolfini had just died in Rome of an apparent heart attack, many of the US reports fronted the fact that Gandolfini’s body would be autopsied, “as required by Italian law.” They fronted this news for understandable reasons—an autopsy on someone who died in medical care seemed unusual. In the United States, we usually don’t autopsy people unless the cause of death is mysterious or foul play is suspected. In fact, we autopsy less than 5 percent of all deaths.

So why would you want to do an autopsy on someone when the cause of death seemed pretty clear? Heart attacks are obvious, right?

You would do so because while death and taxes may be the only sure things in life, the actual why and how of any given is often uncertain, even when doctors think otherwise. The sad fact is that despite medicine’s many modern wonders—the tests, the drugs, the scans that show fibers the size of a hair—the cause of death that American doctors provide for death certificates are dead wrong about a fifth of the time.

How do we know they’re wrong? Because of so-called autopsy studies. In an autopsy study, researchers perform or collect data from post-mortem dissections of large numbers of dead people; determine definitively why they died; and then compare those findings to the causes of death listed on those people’s medical or death records. These studies reliably find something rather shocking: about 15 to 30 percent of the time, the diagnoses at time of death are wrong—and 5 to 10 percent of the time, that diagnostic error probably helped kill the patient.

This is why Italy required Gandolfini’s autopsy: So the doctors and family would know with certainty why and how he died. As it happens, heart attacks and pulmonary embolisms—clots in a lung—present very similarly: Both cause chest pain, shortness of breath, panic, and can kill you within an hour. Doctors thus often think someone died of a heart attack when they actually died of a pulmonary embolism—so often, in fact, that most pulmonary embolisms are not diagnosed unless an autopsy is done. (We know this, of course, only because autopsy studies showed us it was so.)

Get the rest at  Why Autopsy Gandolfini? Death Is Certain; Its Cause Is Not – Facts So Romantic – Nautilus. Includes my father cursing.

For more on how the death of the autopsy is deadly, see my Buried Answers, from the New York Times Magazine.