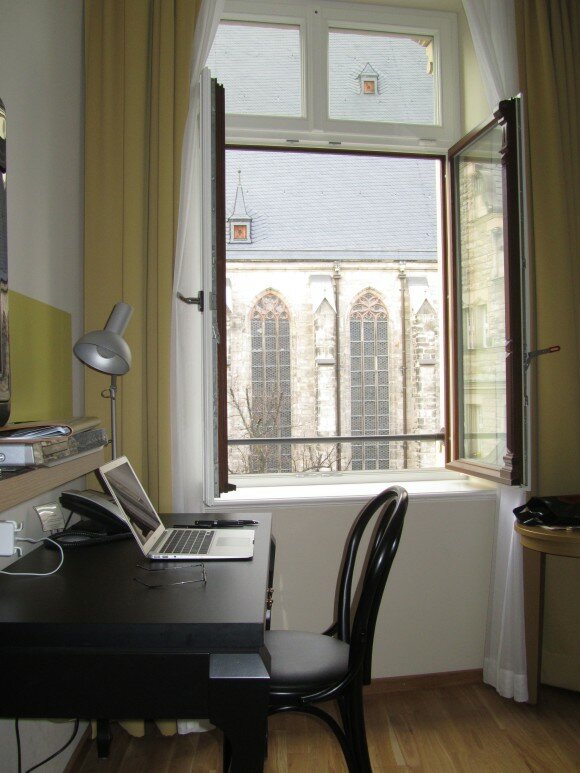 The best place I ever worked — a room in Leipzig.

Apologia: This is a bit inside-baseball, but as quite a few people have asked me what’s the full skinny on why I moved my blog from WIRED, I thought it best to leave a post particularly about that. No dirt here, in case you’re wondering; if you were looking for a whack at WIRED, adjust your expectations.

The reasons, more innocent, boil down to two: Changes in my own work priorities; and changes in the media and blogging ecosystem.

The prime reason I’m moving is so I can focus more steadily for a time on finishing my book, which I’ve mentioned often here, tentatively titled The Orchid and the Dandelion (Crown). I know some people manage it, but I’ve found it hard to reconcile the demands of blogging at a venue like Wired and of writing a serious book that requires deep immersion: a matter of not just the time each  requires, but of what you might call the focal length of one’s mental lens. A venue like Wired requires, methinks, either an unrelenting focus on a particular beat or fairly steady and regular surveys of many fields; I can’t seem to mesh either with the sort of time and focus needed for a book. The move also frees me to experiment a bit more at the blog. I hope to see what sort of more Tumblr-like approach I can take at Neuron Culture now that it’s in a self-hosted venue.

The economics of blogging have also changed. When I joined the WIRED team, people who blogged mostly about science had few venues in which they could place one-off posts. Those few — places like Slate or Salon — were valuable, but few enough that it was hard to place many pieces there. Now, however, at least for established writers, we have not only Slate and Salon, but new venues such as The New Yorker’s Elements blog, Nautilus, Aeon, Medium, and, almost certainly, a couple I’m forgetting at the moment. Despite the value of a platform like WIRED, the cost of leaving it — as I believe I’d have to do now anyway to write my book — is reduced by the breadth of opportunity to place pieces in other places that also have high profile, but which don’t require the singular devotion in the way a regular hosted blog like WIRED does.

I had a great run at WIRED, and give  thanks to Betsy Mason and Evan Hansen for bringing me on at the beginning, and to thank my colleagues Brandon Keim, Dave Mosher, Adam Rogers, Nadia Drake, and the rest of the WIRED team, some present and some past, for giving me a productive blogging platform and great companionships there since September 2010; my fellow bloggers for their support, good cheer, and many fabulous posts; Maryn McKenna, Deborah Blum, and the departed Daniel MacArthur for being not just great blogging colleagues but fine friends; and, most especially, my readers, whom I hope will come along and follow me here. And you can always follow me at The Twitter, as well.