Even the greatest athletes sometimes choke. Take Derek Jeter. Jeter’s hitting generally holds steady or even improves under pressure; he bats as well or better as strikes, outs, and base runners accrue, and his .309 batting average in postseason games is impressively close to his lifetime .317. Yet during the epic 2004 American League Championship Series, as his Yankees won the first three games and then dropped four in a row to allow the Red Sox to reach the World Series, Jeter hit barely .200. 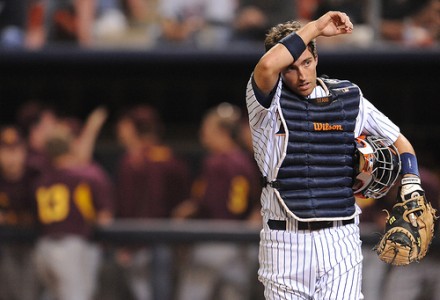 Or consider Ben Hogan, one of golf’s steadiest great players. On the final hole of the 1946 Masters, Hogan needed only to sink a 2-foot putt to win. He completely missed the cup. In another notorious golf gaffe, Arnold Palmer, known for playing well in tight spots and being untouchable once ahead, choked the 1966 U.S. Open twice: He blew a 5-stroke lead in the last four holes of regulation, and in the playoff the next day, he blew 6 strokes in the final eight holes, losing the tournament.

Collapses like these — classic chokes — appear to rise from the process known colloquially as “thinking too much” or “paralysis through analysis,” and among cognitive scientists as “explicit monitoring.” Explicit monitoring, says Beilock, is “conscious attention to normally automatized physical operations that destroys the athlete’s normal fluidity.”

This is the micromanaged putt, the aimed pitch, the overdirected free throw. This is the screwup your brother is trying to induce when he asks you, as you tee up, “Do you inhale or exhale on your backswing?” By consciously trying to direct a physical action that you’ve practiced until it’s automatic, you botch it.

Bounteous research has confirmed that for polished athletes, the explicit monitoring of destroys performance. Beilock, for instance, demonstrated this by asking expert college soccer players to keep track of which side of which foot was contacting the ball as they dribbled through a series of pylons. When they did, they moved through the pylons more slowly and made more mistakes than they did normally. She regularly gets similar results when she asks good golfers to monitor, say, how far back they take their backswings.

“You need to monitor these mechanics while you’re learning an action,” Beilock notes. “But once you’ve learned it, you’ve got to leave it alone.”

The classic advice for avoiding thinking too much is to “not think about it.” But this is not easily done. You’re better off, says Beilock, if you find something else to think about — a useful distraction, some simple mental task that occupies the mind enough to keep it from meddling.

Rob Gray, a professor of psychology at Arizona State University, demonstrated this a few years ago with an elegant two-stage experiment he conducted with high-level college baseball players in a batting cage. In the first part of the experiment, he asked the batters (whom he had already watched hit in order to establish a baseline performance) to listen for a tone while hitting so they could report where their bat was in the swing when the tone sounded. Unsurprisingly, this explicit monitoring made them hit worse. They missed more often, and their swings got measurably slower and more choppy.

Yet it was not the listening that messed them up; it was their attention to the swing. For when Gray asked the hitters to listen for a tone while batting and report merely whether the tone was high or low in frequency, the hitters swung as fluidly and hit as well as usual. Their bodies knew the hitting process well enough to do it with a distracted brain. But explicitly monitoring the process gummed it up.

Since then, Gray, Beilock, and others working such “dual-task” or “healthy distraction” experiments have shown that attending a modestly demanding outside mental operation can reduce explicit monitoring and alleviate choking. Beilock has found, for example, that golfers under competitive pressure can prevent decrement by counting backwards to themselves while they putt.

“It’s what I was doing when I sang during face-offs,” says Beilock. “The simple mental task lets your body do what it already knows how to do.”