Such findings have made explicit monitoring the blanket explanation of choking in sports. It’s as if everyone agreed that while a bit of smarts can serve well at times — mostly for catchers, point guards, and quarterbacks — jocks generally best leave their thinking brains in the locker. 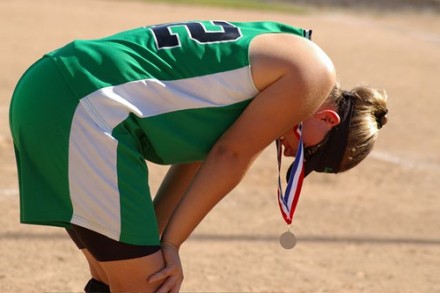 Perhaps because she is both brain and jock, Beilock received this wisdom skeptically. As a grad student looking at choking research, it struck her that the prevailing model of performance under pressure rose from experiments that look almost exclusively at physical actions.

“Yet choking,” as she points out, “is so clearly mental.

“If you study golf and study only the strokes, you’ll have only one idea about how skills fail. But there are crucial skills in sports that rest on processes less physical. Part of sports is thinking.” And there are chokes, she asserts, that rise not from overthinking but from poor thinking.

She offers evidence both anecdotal and experimental. For anecdote, consider golfer Colin Montgomerie in the 2006 U.S. Open. Montgomerie, 42 at the time and burdened with the unofficial title Best Golfer Never to Win a Major, began the tournament’s last hole having just taken the lead with a gorgeous 50-foot putt.

To take the trophy he simply had to par the 18th. He put his drive in the middle of the fairway, leaving himself a straightforward 170-yard approach shot to the green. But after pulling a 6-iron from his bag — his usual club for a 170-yard shot — he suddenly worried about hitting too long.

He put back the six and pulled out the shorter 7-iron — and hit short. The ball landed in deep rough. His chip landed 30 feet from the hole, and he three-putted to lose by a stroke.

An even clearer example comes from the 1993 NCAA championship basketball game. University of Michigan star Chris Webber gained possession of the ball with 11 seconds left and called a time-out — only to discover that his team had no more time-outs. The resulting technical foul helped seal Michigan’s elimination.

Beilock contends that such failures come not from unwelcome attention, as explicit monitoring does, but from a deficit of needed attention. “Sports aren’t cognitively static,” says Beilock. “Situations change, and you need to track things and make decisions. You can’t just not think. There’s a whole skill involved in knowing not just what not to think about, but when to attend things that need tending. You’ve got to be able to control what you’re attending to.”

At the Sox-Indians game I saw with her, this made perfect sense. A typical at-bat requires coming to the plate with a plan of attack based on the hitter’s skills and the pitcher’s strengths and proclivities. Most batters focus on a hittable area of strike zone they suspect the pitcher will find at least once with a particular pitch: fastball outside, perhaps, or slider in tight. As the at-bat progresses and the hitter gains or loses advantage by getting ahead or behind in the count, he must shrink or expand his swing zone.

When hitters step out of the box between pitches, it’s usually to perform this recalibration: they zoom out from their deep focus to check the count, regauge their swing zone, then step in and zoom in again. If they don’t do this or they think poorly or second-guess, they’re more likely to get surprised — and to swing at pitches they should take or take pitches they should swing at.

Beilock holds that such faulty thinking amounts to a different sort of choke: a disruption of quick but vital data-checks, calculations, and recalibrations that the athlete must perform to play at optimum level. It’s a failure of cognition. Call it a cognichoke.

Is that what was going on with Konerko? And how did it work?