How did hitters handle this dual track? I wanted to ask Paul Konerko. So late that season of 2008, on August 29th, I went to another White Sox game, the opener of a vital three-game series against the Red Sox in Boston. For pressure, this one easily beat the May game I’d watched with Beilock. Both teams were in drum-tight pennant races; the Red Sox were 4.5 games out of first in the American League East and the White Sox up a game and a half in the AL Central. Both teams needed wins. Both knew they might meet a month later, in the postseason. 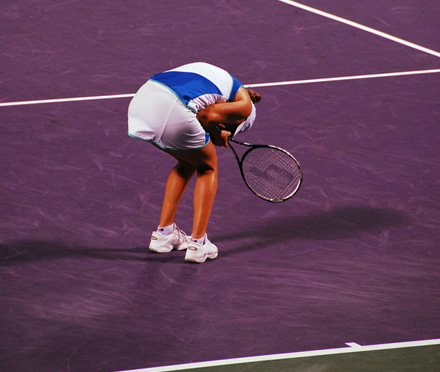 Despite the stakes, however, the White Sox clubhouse seemed a remarkably calm place three hours before game time. Several players sat watching a Cubs-Phillies game that ran quietly on a television. Another cluster studied laptops showing films of Boston pitcher Daisuke “Dice-K” Matsuzaka, whom they would face that evening. I found Konerko in a chair in front of his locker doing a crossword puzzle.

Konerko in person projects a warmth and quickness of expression that doesn’t come across in photos or even video. He is a smart but modest man, and articulate and open in a way that had long made him a favorite interview target among Chicago sportswriters. He sat alone today, however.

His season had not gone well since I’d seen him strike out in May. After hitting .222 in April and .191 in May, he’d gone .250 in June and .209 in July, and so entered August hitting .214 with just 9 homers, half his normal pace. The White Sox, desperate to produce more runs, dropped him two spots in the order, from the hallowed cleanup spot, fourth, to sixth; the Chicago press, meanwhile, was calling for his head.

On July 31 the team acquired slugger Ken Griffey Jr., and Konerko started seeing his name replaced on the lineup every few days by Nick Swisher, a 27-year-old outfielder-first baseman who until then had played the center field spot now occupied by Griffey.

Whether it was the Griffey trade, the days off, or improving health, however, Konerko had started to heat up the first week of August. He got a hit almost every game that week, including three in one game in Detroit. The following week he went 6-for-20. He entered this crucial Boston series hitting .339 for the month.

In four weeks he’d become a different hitter. Surely, I figured, he would be able to describe some difference in how he felt now versus a month before, some mental or mechanical adjustment that explained his cleaner engagement with the baseball.

“It’s kind of strange, actually,” he told me. “Fact is, I don’t feel any different. I mean, I feel happier when it’s going well and I’m helping the team. But I don’t really understand what goes on when I’m doing well versus when I’m doing badly. I’ve had whole years where I had ‘good years’ — good numbers, helped the team — but felt like I was struggling the whole time. I’ve had other stretches where I feel completely locked in — and things don’t work out.”

I asked him how he tried to adjust when things weren’t going well or when a situation carried more pressure.

“You try to stay steady. Not change too much. You prepare. You do your work every day, so you’re swinging well and you know your pitcher and the situation. Then you go in and try to focus and execute. In the box, keep it simple. I try to concentrate on tracking a pitch into a zone I’ve chosen to focus on, swing hard at those. Sometimes you get fooled. But you stick to your routine, stay focused. Don’t overthink.”

This message — sticking to a routine, not overexamining — was echoed by every hitter I talked to that day, on both teams: Boston’s free-and-easy slugger David Ortiz (“Don’t be changing things!”); his tautly focused teammate catcher Jason Varitek (“Stay with your game.”); and Konerko’s clubhouse mates Jim Thome (“Be true to your program.”) and Ken Griffey, Jr., who simply said, smiling slyly and repeating himself precisely in tone and emphasis, “Every at-bat the same. Every at-bat the same.”

These were variations on “Don’t think too much.” But almost every conversation also addressed, in ways more veiled, the tension between when to think and when not to. The most revealing was a comment Konerko made as I closed my notebook, ready to let him return to his crossword.

“I wish you luck with this,” he said. “It’s a hard kind of story to get people to talk about this time of year — a team like this, anyway, in the middle of a pennant race. This is really kind of a spring-training story.”

Only later did I realize what he meant. During the season, hitters in particular must guard against constant tinkering, or they’ll tinker away a season. You save the heavy refashioning — reworking your stance or your swing, changing your focal tactics — for spring training. Once play begins, you stick to your program.

Approaching every at-bat the same does more than prevent external monitoring. It ritualizes the mental processes — the zoom out to check the situation, the zoom back in to focus, the oscillations between thinking and not thinking — that are as vital as the physical execution. It creates a management of attention as proceduralized, if not quite as automatic, as your swing mechanics.

I considered all this later, as I watched Konerko confront the mystery that was Daisuke Matsuzaka. Dice-K, 16-2 entering the game, had all seven of his pitches going that night in Boston. He was always on or near the edges of the plate and never over the center; he threw an untrackable variety of trajectories and speeds; he dipped, zipped darted, and curved; he made the ball do everything but climb. The White Sox managed just two hits, and they never came close to scoring. It was hard not to feel sorry for them.

Yet Konerko, though he went 0-for-3, looked good. Before each at-bat, when he was on deck, he smoothly executed the same stretching and swinging rituals, a sort of meditative entry. At the plate, he stepped out of the box after each pitch with the same deliberation and rhythm every time, took the same easy-ripping practice swing, raised his bat, stepped back in.His body language did not convey the dismay and confusion that it had 14 weeks before. He was more evenly engaged. And he had good at-bats.

He didn’t get much to hit, but he took the pitches he should take and swung at the ones he had to, and in the second he drove the one touchable pitch he saw, a nasty low fastball, deep to right-center, where it was gathered in by a sprinting Jacob Ellsbury. He didn’t get a hit. But he had righted himself.

Was he in the “zone,” that hallowed place of effortless full focus? Perhaps; he certainly seemed to be there in the week that followed, as he went 10-for-28 with 3 homers, and for the rest of the pennant race, as he hit .260 with 9 homers in September, despite a knee injury mid-month. He was the team’s hottest bat as they won the American League Central Division by a in a one-game playoff to resolve a end-of-season tie with Minnesota. (They then lost the American League Championship to the Tampa Bay Devil Rays in four games.)

The zone is a happy place. Yet if the zone lies at one end of a spectrum and the choke at the other, athletes spend most of their time laboring in the spectrum’s inner bands, in a gray area between groove and gag. Playing on the happier end of this band requires almost numbingly proceduralized mechanics both physical and mental — a physical groove of automated motion and a mental groove requiring a disciplined oscillation of attention and thought.

“It’d be nice,” as Konerko told me, “if it were as simple as not thinking. But you’re always thinking. It’s a matter of what you’re thinking about.”

The original version published here placed the events in the wrong year. The games were played in 2008, not 2009. That’s been corrected. In addition, the White Sox ended the season by defeating not the Marlins, as originally stated, but the Devil Rays.

Images: 1) Australia’s Greg Norman reacts to a bad tee shot on No. 4 during final-round play of the 1996 Masters at the Augusta National Golf Club in Augusta, Georgia, April 14, 1996. Norman bogied the hole. (Curtis Compton/AP).