Sports psychology goes back to 1898, when psychologist Norman Triplett found that cyclists ride faster in groups than they do alone. Since then, sports psychologists have had the arena of performance and its decrements largely to themselves. No one outside jock psych seemed terribly interested in what made people screw up. 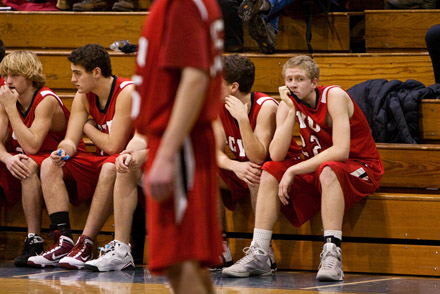 This began to change, however, in 1995, when a Stanford psychology professor named Claude Steele, working with graduate student Joshua Aronson, published a study titled “Stereotype Threat and the Intellectual Test Performance of African Americans.” The paper described how Steele and Aronson knocked down by a whopping 50 percent the scores of black Stanford undergrads taking sections of the Graduate Record Examination (GRE) simply by telling them the test measured intelligence.

The paper created a sensation, inspiring a rain of similar studies. Steele and Aronson subsequently showed you could drive down test scores merely by having black students declare their race on a pre-test form. They and other researchers soon found that stereotype threat works on other groups, too. Mention anything about gender or “innate ability” to women taking a math test, for instance, and they’ll make more mistakes.

Though these stereotype-threat effects fairly reek of choking, several years passed before anyone examined them in the light of sports performance. Then, in 1999, Jeff Stone, a social psychologist at the University of Arizona, asked both white and black golfers to play a putting game framed as a test of either “sports intelligence” or “natural athletic ability.” The results still astonish: Among the golfers considering the putting game a test of “natural athletic ability,” blacks did better than usual and whites did worse. Among those framing it as a sort of sports intelligence test, whites did better and blacks worse.

This result, replicated many times since, eerily echoes the GRE test-score plunge that Steele and Aronson induced in 1995. Yet that white golfers suffered a hit while being tested for “natural athletic ability” raises an intriguing question: If white male golfers in Arizona can be so easily derailed by an unflattering stereotype, who on earth is exempt from stereotype threat?

No one. Since those first studies, Stone, Beilock, and others have produced, with almost laughable ease, absurdly task- and stereotype-specific effects in groups of every sort. For instance, if you ask white men to jump both before and after calling the jumping test a measure of “natural athletic ability,” they will jump significantly less high after the threat. White male engineers, meanwhile, will ace a math test if it’s presented as a test of gender-based or innate math abilities — but tell them they’re being compared with Asian male engineers, and they’ll choke badly.

“We haven’t found anyone,” says Beilock, “that we can’t screw up by suggesting that some group they’re a member of is bad at something.”

Stereotype threat, it turns out, is a surprisingly democratic dynamic. Obviously stereotypes such as bigotry and sexism are not applied equitably. But no one is immune to the mechanism that stereotype threat applies. For this reason, some psychologists are starting to call it “identity threat.” As Jeff Stone put it, “We all have multiple identities, and they can all be discriminated against. It’s the identities we carry that make us vulnerable here.”

Emphasize the identity aspect, and the sports implications rapidly expand. The many late-season and post-season failures by the Chicago Cubs, for instance, start to make more sense: In a pressure situation, any simple reminder that you’re a Cub (like, say, your uniform) may cause enough decrement to make you drop fly balls, boot grounders, or monitor your way out of an at-bat.

Meanwhile, stereotype “lift” — a performance boost that some studies have found in people doing tasks their stereotyped groups supposedly do well — may lend extra advantage to the Yankees or (now that their two World Series wins in 2004 and 2007 seem to have lifted the Curse) the Boston Red Sox.

But how does stereotype threat work? The initial hypothesis about the Steele and Aronson African-American test-taking results was that stereotype threat created a self-fulfilling image of failure, a sort of role-playing in which the test-taker surrenders to the stereotyped identity by disengaging emotionally and intellectually. In the last five years or so, however, researchers such as Beilock and the University of Arizona’s Toni Schmader have done experiments suggesting that stereotype threat fouls performance primarily by occupying working memory.

Working memory is the crucial mental faculty that briefly retains multiple pieces of unrelated data so you can use or manipulate them. You depend on working memory every time you read a paragraph, learn a new definition, perform a multipart math problem in your head, or try to retain a phone number while you finish a conversation. Working-memory capacity is closely tied to general powers of intellect and decision-making. When it’s not working well, you’re not as sharp.

In late 2007, Beilock found that when women under stereotype threat choked on a math test she designed for them, they choked almost exclusively on problems that relied on working memory; they fell short not because they were thinking too much, but because they couldn’t keep in mind the things necessary to the task.

This working memory failure is a much different mechanism than external monitoring (which stereotype threat can also cause); instead of overmonitoring a physical operation, the athlete or test-taker is poorly attending a mental operation. Beilock believes such misattention is at work when athletes commit mental stumbles like Colin Montgomerie’s club switch. Montgomerie wasn’t stupid to double-check his choice of club; calibrating club selection is essential to high-level golf. His mistake was in not working through the problem fully and leaving out the essential information: that conditions dictated that he should indeed use his regular club length. But with his cognitive machinery slowed by preoccupied working memory, he failed to think straight and miffed it. He cognichoked.

How do you fend off such effects of stereotype threat? As Jeff Stone notes, identity is partly a matter of context and even choice. “Usually, something in the context has to activate a stereotype threat. It has to be turned on. But you can also turn it off. To some extent, you can reframe things yourself.” Asian women, for instance, do better on math tests if they focus more on their Asianness than on their gender.

“You can’t dictate your genes,” says Stone. “But among the many identities you have, you can choose which to operate from.” Tiger Woods, for instance, has clearly forged an identity that transcends the potential vulnerabilities of his multiracial makeup. You can wallow in your most negative identity — the slow one, the overthinker, the one who doesn’t care — or you can foreground another identity, the one who is ready, the one who knows what’s coming, the one who calmly attacks the problem.

Not that this comes easy. As Beilock notes, this second, cognition-based failure under pressure means “there are at least two things going on, running parallel, almost all the time”: a physical track and a mental track. “And what might disrupt you — what might crunch under pressure — depends on what you’re doing at a particular moment.”

You can jump off the physical track by overmonitoring and fall off the cognitive track through inattention. And distraction greases the physical track and kinks the cognitive. To travel both smoothly requires knowing what to attend to and what not to attend to — or to put it another way, understanding what to distract yourself from (your physical mechanics) and what not to get distracted from (the score, the count, how many time-outs you have left).

This is a vision of athletic performance both alluring and daunting. Sports start to look a lot more like real life — and much more demanding.

“It’s a lot more complicated than just ‘Don’t think about it,'” says Beilock.